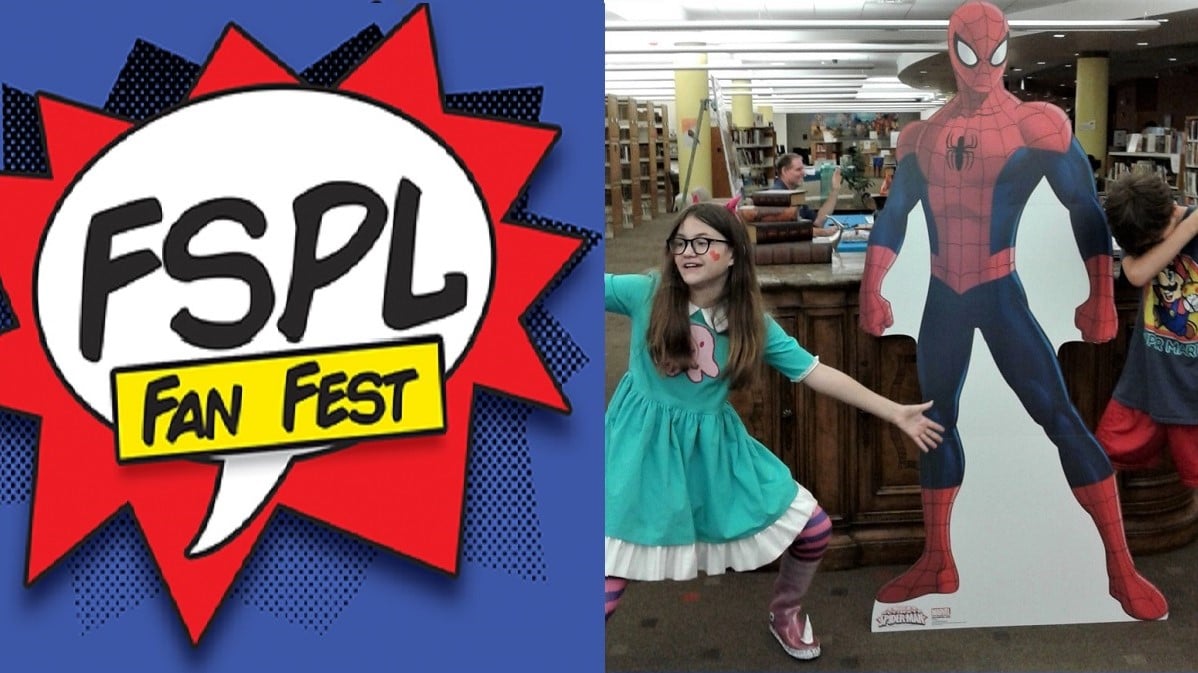 I’ve never been to a real geek Con. I’ve been to the occasional educational conference for librarians or writers, but nobody cosplays for those. I’ve been to the Ren Faire, but that’s not quite the same thing either. The nearest city DOES host Anthrocon yearly, if I wanted to cosplay in a furry suit in July. But it’s not exactly a main hub of Con-confluence. I’m a parent and a cheapskate, which makes traveling far to one difficult. I’m also an introvert, which makes even the smaller local cons not really worth the hassle, to be honest.

But I work in a public library, and the mission of a public library is to bring culture and educational experiences to our own community. When I first started working there, no one would have considered hosting our own geek Con to be an ideal expression of that mission. I was the youngest and the only self-professed geek there. But now we have an Assistant Director whose text notification is a Wookie roar, a social media guru who used to work in a comic shop, and a children’s programming leader who—actually, I can’t think of a specific for her, but she knows her geeky pop culture, too. She’s the one who built this awesome Sorting Hat, in fact. So when the four of us started brainstorming large-scale programming ideas, a “Comic-Con” came up. It stewed for about a year. Then we got the go-ahead to schedule it and pursue it in earnest.

The actual term “Comic-Con” is trademarked by the SDCC. You have to get permission from them if you want to use it. We applied for permission fairly early on, and never heard back, but fairly soon we decided we didn’t need it, anyway. Just because it’s the most famous geek pop culture con, doesn’t mean that all cons are “Comic Cons” anyway. We wanted this to cover everything geek pop culture, comic-related or not. It would be about FANDOM in general. So then we had the best name: Fan Fest. A con for your fandom, whatever it might be. A con celebrating fandom itself!

Last time I wrote about a major library event, it was the Hogwarts party I had been in charge of. This one was more the Assistant Director’s baby, which means I can’t give quite the same inside scoop on how it all came together. She has the organizational and people skills to track down vendors and artists to share their skills in panels or sales.

She wrangled a surprising amount of local comics experts, especially considering how many people she contacted that couldn’t come because our date conflicted with a bigger con just over the border in West Virginia (and we’d already changed the date we were originally holding ours because it conflicted with two other relatively-nearby cons!) She discovered that the people at the Pittsburgh Comics Salon would teach drawing workshops all day.  She found Patrick and Shelly Block, a couple from our own town who’d been making comics for Disney for decades. When a third local artist had to cancel a week before Fan Fest, she managed to replace him with caricaturist Clarence Butler at the last minute.

I, personally, really wanted to cosplay, and we struggled at first trying to decide how much we could do with it. Did we want to have a contest? Did we have any idea how to judge a contest? And what if no one showed up in costume at all? I put our fearless leader in touch with former-GeekMom-writer-and-the-one-relatively-local-passionate-cosplayer-I-knew-of, Shiri Sondheimer—whom I’d never actually met in person!—who was pumped to help us out, but couldn’t think of anyone else to recommend. Just a couple months before Fan Fest, we finally tracked down some semi-professional cosplayers who’d apparently judged a cosplay contest for a library north of the city earlier that year. We pulled in a couple more, and even one who really wanted to participate but didn’t get back to us in time. They all, including Shiri, got in touch with each other and put together a whole panel for us on how to cosplay, too! I had been worried at first that maybe all these people would think we were imposing on them, since we couldn’t pay them, but it seems cosplayers as a whole just love any excuse to dress up… and how can I blame them, when I feel exactly the same?

Admittedly, when we first proposed to host a Con, my imagination ran not immediately to “what things should we do for it?” but to “who do I want to dress up as?” I eventually decided it would depend on what I would be doing the day of. If I had to work the reference desk at the event, I wanted to be appropriately librarianish, and decided I’d be Janet from The Good Place, since she’s basically the platonic ideal of a reference librarian. But if I wasn’t going to be on desk, I wanted a more comic-y character—in the sense of the medium of comics, as opposed to comical, because Janet’s the funnier one—although being not-a-comics-reader, I actually went to the medium of movies-and-TV-shows-based-on-comics, and for me, that character pick was obvious.

Our last-minute caricaturist said that he’d wanted to come as Nick Fury but couldn’t find an eye patch in time. Ah, the lost opportunity for a “S.H.I.E.L.D. Directors Through The Ages” picture! Anyway.

We really had no idea how many visitors would actually come in costume, so I was thrilled to see exactly how many did. We had people of all ages, in clothes ranging from geeky t-shirts and stealth cosplay, to simple wigs or capes, to old Halloween costumes, to complicated handmade constructions. We had superheroes, video game characters, anime characters, furries, book characters, and original characters, too.

But if anyone came costume-less and felt left out, that’s why I set up the Instant Cosplay Station. This was where I ended up stationed for the day, helping visitors to create a mask and/or set of cardboard cuffs. Of course, even the visitors who had come in costume enjoyed making more bits and pieces of costume anyway. (I helped Shiri’s daughter make a matching mask for her Miraculous Ladybug costume while Shiri was doing the Cosplay Panel. Funny—Shiri would have been the first person I’d ever met online before meeting them in person, but we were both so busy that day we never actually got the chance to even say hi. So, technically, her daughter was the first person I ever “met” online before meeting in person!) I loved the sheer variety of ideas people came up with from just the same basic materials!

I think one thing we definitely had more of than your typical con was crafts, mostly because most of us are used to planning storytime programs, and crafts are what we do. The Instant Cosplay Station was designated “all-ages,” but we had a craft room just for ten-and-unders where kids could make simple Captain America shields of paper plates and construction paper, or lightsabers out of pool noodles and duct tape. For ten and up (and frequently parents helping younger ones), we had hot glue wandmaking, decoupage coasters made from old comic pages, Perler beads, and Shrinky Dink keychains, the latter two of which involved patterns from various fandoms (“Random Fandom,” we called them) or original designs.

But particularly artsy adolescents could get in on the fun early by entering our fan art contest for ages 10-17. It might have been just for teens, except I knew how much my ten-year-old would want to enter, and so ten became our starting age! We had two age categories, 10-13 and 14-17, and a lot of fabulous artwork in each! We had a panel of judges made up of local art people (an art teacher, a comic shop owner, and a tattoo artist!) to choose 1st-3rd places in each, and, for the month before Fan Fest, we gathered votes from library visitors for a People’s Choice award, too. You can see all the great submissions (and the winners) here on the library’s Facebook page. My ten year old may not have won anything for her Star vs. the Forces of Evil art, but she got a lot of compliments…and she’s got seven more years to keep at it!

And speaking of contests, we also had games! There were three separate scavenger hunts set up. One involved snapping pictures of little pixelated Super Mario sprites hidden all around the building. Another was a Harry Potter-themed follow-the-clues treasure hunt. The third was this particularly-inspired-in-its-simplicity Infinity Stone search. Clues would lead you usually to thematically appropriate areas, where you’d find a sheet of colored dot stickers to add to your cardstock Infinity Gauntlet:

We had a collection of arcade-style games: Shoot Down the Death Star (with Nerf darts), the Joker’s Putt-putt hole, and the TARDIS Toss.

And we had trivia contests all day, divided by fandom, although after the fact we’ve decided it might be more fun to just have one big general Fandom Trivia contest. That way people could build teams of experts in different topics to work together, and no one person would be able to dominate. And, because the questions would have to be general rather than tailored to obsessive fans, we’d have less complaints about the questions being too hard, my dear daughter who complained nobody could know the question I wrote about what Prof. Vector teaches (arithmancy, obviously, it was one of the classes Hermione could only take with the help of her Time-Turner at first!) .

We had story times scheduled, but they didn’t attract much interest, and a room where various animes showed all day. We had food sales and vendor sales and local businesses advertising. And mostly, we had fun. We had patrons begging us to do it again. And by the end of the day, even our initially-wary director was outright promising that we would.

Today we had a wrap-up meeting, and officially decided: we will be making this an annual event from here on out. See you in Canonsburg, PA, next September, wannabe con-goers!

4 thoughts on “Fan Fest at the Library!”