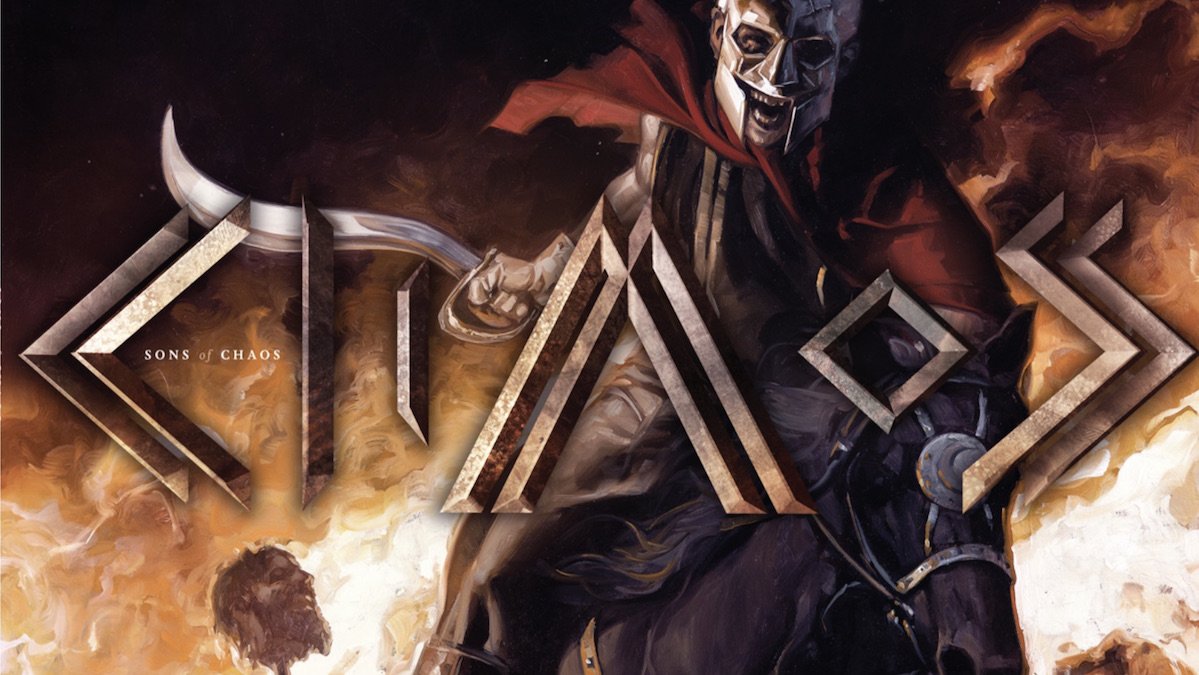 History isn’t always tidy, and there is so much of what we know today that was shaped by events and people, who may not be as well known as others.

In IDW’s new oversized graphic novel Sons of Chaos written by Chris Jaymes and illustrated by Ale Aragon, one of these people, Markos Botsaris (“Marcos” in the story), gets his own story as the 200th anniversary of the 1821 Greek War of Independence is just a couple of years away.

Sons of Chaos shows how Botsaris, the son of a leader of the Suliotes (a Greek Eastern Orthodox community that resisted the Ottoman rule), spent 10 years as prisoner of Ottoman Pasha, Ali Pasha of Ioannina, referred to as the “Napoleon of the East.”

Jaymes has worked several years in the entertainment industry as a writer, director, producer, actor, and musician. Sons of Chaos is his first graphic novel. He said Botsaris is sort of “an ideal starting point” to tell this story, as he was “really a child during a time of relentless attack from the Pasha that was in charge of Northern Greece, Ali Pasha.”

The reader witnesses Botsaris’s life in three stages: the “childhood” that takes him from his village to growing up as a prisoner, to his “adolescence” where he reconnects with his family, including the strained relationship to his father, and finally to an adult where his heroism is revealed.

“In 1803 his village, Souli, was taken over and those that survived were forced to flee,” Jaymes said. “Prior to that, the people of Souli were among the few that never surrendered to Ottoman leadership, which makes the Souliotes a good starting point to introduce the ongoing struggles they faced against Ali Pasha which are filled with amazing stories.”

He explained the concept of being born into a “state of chaos” and forced as a child to accept the reality facing you is “compelling” to conceive.

“Something surreal to comprehend when you come from the Western World, where most of us begin our early years in a place of comfort,” Jayme said. “The idea of revolution and the fact that a repressed society can stand up to an empire and manage to come out ahead seemed to be a story worth telling. I can barely stand up to my dog without caving and she’s only so threatening.”

Although the book is narrated by Botsaris, it did veer from his own recollections to let readers in on what other characters were doing outside of Botsaris’s own perspective. We witnessed the bravery, strength, and sacrifice of several women and men in Botsaris’s life, including his own mother and sister.

In the case of Ali and his son, Muhktar, it gives us an unsettling look at how far “man’s inhumanity to man” can go when power is the reward. In some cases, the reader witnesses not only strength and resilience, but also the tragic and desperate acts people resorted to in attempts to avoid capture by their oppressors.

Jaymes said the fact “most of us” have never heard of this war is enough to justify having an idea that it occurred.

“Greece is a pretty sought after destination and I find that when I visit a place, having a mental picture of what happened before adds meaning at a level slightly more profound than a pretty Instagram pic,” he explained. “Knowing I’m standing in a spot that was under siege not so long ago, where women and children were engaged in a very raw, very brutal battle gives it a different meaning.”

He hopes today’s readers will take to heart the hardships those who went through conflict such as this had to face.

“Something we take for granted as we’ve been born into a very blessed period of time for the most part. We have plenty of annoyances and unpleasant life situations we have to face, but we are not faced with moment-to-moment uncertainty from all directions surrounding our survival,” James said. “Understanding that this was just a moment ago, and realizing that if we are not thoughtful and proactive in our attempts at unification, this reality can exist again. And we are reaching a point in time where the generations that faced a World at War are either very old, or nonexistent, and the harsh reality that comes with it is no longer understood. The current trend of global polarization that is occurring is disheartening, and this story is just another reminder of what we should all be working to avoid.”

Jaymes’ story is just part of what conveys this message, as Aragon’s illustrations create the constant chaotic atmosphere. Aragon has worked on titles ranging from Deadpool to Northlanders, as well as Overlook, which he co-created.

Aragon’s art for the book was vibrant and energetic, but kept the color scheme limited so that it felt to me like we were looking into someone’s memories, rather than into a colorful graphic novel retelling of events. It wasn’t always pretty. The book is intended for mature readers, so there were some pretty graphic images. At first glimpse, some images seemed unnecessary, but they do help provide a key to what memories of Botsaris would be most significant. His recollections would be filled with images that wouldn’t be pretty at all.

“Ale’s work is raw,” Jaymes said of Aragon’s illustrations. “He works in ink, by hand, and you can feel the emotional intensity on the page. It’s visceral and vicious and still thoughtful and soft when it needs to be.”

Jaymes said he would happily work with Aragon “for the rest of time” and is proud of the achievement of his story and Aragon’s art coming together as it did.

“(It would) be a bonus if we could actually work together in the same place, as we did this entire book remotely,” he said. “It’s a miracle it came out as wonderful as it did.”

One thing that Jaymes and Aragon show the reader is there are those we may call heroes who don’t always fit the bill of what a hero should be, nor is every decision or move they make befitting of a hero. There are also those who many may not consider heroes, but whose acts of bravery would be more heroic and world changing than even they could imagine.

Those of us who are fortunate enough to have a lifetime of experiences may realize it sometimes only takes one or a few acts to define us. In the case of Botsaris, those acts helped to free a nation.

Jaymes and Aragon did a worthy job transforming this story into graphic novel form, as it was able bring to light Botsaris’s contributions to shaping Western civilization without hiding the flaws and shortcomings that made him only human.

Jaymes said there were so many things he would have liked to incorporate in the story, as the period in Mediterranean history was so “extensive and rich” with layers of the story still left to be told.

“The hardest part of the initial conception was defining what story to tell and what elements to focus on in a manner that could create a compelling story for those who knew very little about the war,” Jaymes said.

He said he wanted to make sure the they were telling an engaging story first, and giving a history lesson second.

“In some ways, Markos becomes a portal for us to get a larger sense of the war, as opposed to a literal documentation of his life,” he said. “Through Markos, we travel through various elements of the Greek War for Independence, introducing various battles and icons from the time, that can inspire you to look further.”

Don’t expect a typical storybook ending for either Botsaris’s own fate to the freeing of his people. The book’s events were only the beginning of Greece’s road to independence, which would still be long fought. Instead the story’s conclusion seemed both fitting and satisfying for the title.

Those interested in the many corners of world history as well as just wanting an exciting action story, Sons of Chaos is a solid tale.

GeekMom Lisa received a copy of the book for review purposes.

Remembrance of Things Past