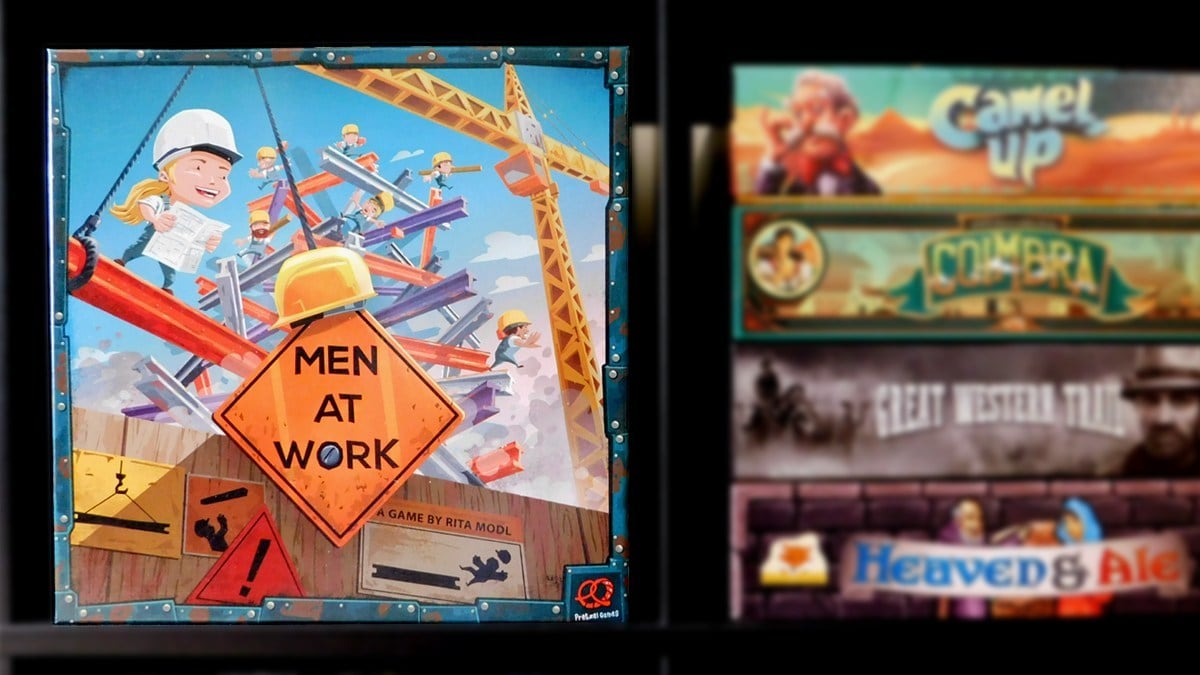 I love dexterity games. Anything that involves stacking or slicking or rolling or balancing. Games like Jenga, Junk Art, and Suspend. They’re easy to learn and–even better–easy to teach. They don’t come with any of the assumptions or stigma of heavy, crunchy boardgames. Instead, you can break them out at a moment’s notice and get even the most adamant of non-gamers to partake. And the value of that is immeasurable. Men at Work is a new addition to the genre the brings just enough “boardgame” sensibilities to bush the boundaries of the genre without ruining the fun or feeling at all, as the title implies, like work.

What is Men at Work?

Men at Work is the newest offering from publisher Pretzel Games, whose past titles have included such dexterity gems as the afore-mentioned Junk Art as well as the madcap western Flick’em Up. From designer Rita Modl, Men at Work clocks in at a brisk 30-45 minutes that often feels like only half of that thanks to the speed at which it plays. Featuring lovely art by Chris Quilliams, the games is for 2-5 players and retails for $49.99 (and, although it’s worth every penny, it can also be found much cheaper if you look around.)

Men at Work is so chock full of colorful goodies that you’ll be smiling ear-to-ear before you even get to playing, starting with your coterie of hardhat-wearing wooden workers who will be populating your work site. In all, the game contains:

How to Play Men at Work

First, and I feel like most critical, while it isn’t mandatory that you listen to Australian rock band Men at Work while playing American board game Men at Work, it is recommended.

I’ll admit that I was apprehensive going in to this game. I like my dexterity games simple. Just a few rules that can easily be explained to new players, and Men at Work–with all its bits and bobs–looked like it might have too much fiddliness and minutia for my tastes.

Despite the box brimming with bricks, beams, girders, supports, workers and more, that game itself is actually incredibly easy to teach, especially if you adopt a “check the details as we get there” approach.

To begin, the manual offers several options for setup with scaling difficulty. All involve different arrangements of 4 girders (1 in each color) splayed out across 3 supports to create a starting framework for what I can only assume is the result of a Zaha Hadid fever dream. A single worked is placed somewhere on one of the girders, the deck is shuffled with the Boss card somewhere roughly a quarter in, and you are now ready to begin.

On your turn, you flip over the top card of the deck and then consult the face of that card as it correlates to the back of the next card on the deck. The card backs will indicate whether you are adding a girder or a worked to the site that turn, while the card you flipped will give you exact instructions for both. And while placing a single item may seem easy, rest assured, it rarely is.

First, color of pieces is of great important. For girders, you will always be given a specific color to place, and for workers you will always be instructed to place them on girders of a specific color. On top of that, there are over 20 different instructions that you will see over the course of the game making your life difficult. You may be instructed to place the girder so it becomes the highest object on the jobsite. You may be forced to add a worker while balancing a brick and a beam on him. You could be required to place a girder so that one end is supported by a worked on the job site!

There’s a huge amount of variety in play, and almost none of it is easy. But nor is it impossible (okay, sometimes it might be). There’s almost always that sliver of hope that a perfect, controlled placement may just be successful. So players collectively hold their breath, cross their fingers, and watch. Even though it’s a competitive game, the sense of camaraderie that builds up between players as the game evolves is palpable. Although, as strong as that bond is, it will evaporate in a second the moment you make a mistake.

You can win (or lose) the game in one of two ways.

First, each player begins the game with 3 safety certificates, and any time they fail their turn by dropping or dislodging part of the work site down onto the playing surface they must give up one of those certificates. If they ever lose their third one, they are eliminated from the game.

Players also, however, have a chance to actively win as the game goes on. Roughly a fourth of the way into the deck the Boss Rita card will be revealed. The gameplay will continue as normal, with the added exception that anytime a player manages on their turn to place their piece as the highest on the work site they will get an award. The exact number you need varies by player count, but collect enough awards and you win the game outright.

How Good is Men at Work?

As mentioned earlier, I was half-expecting Men at Work to fail, to get bogged down in the details and make a simple concept into something overwrought and tedious. Happily, I couldn’t have been more wrong.

Memorizing the meanings of all the instruction cards will take some time, but as long as you keep the manual handy that isn’t necessary anyways. Similarly, you’ll quickly run into situations you don’t know how to deal with. “Does that count as fallen?” “Do I put the girders back up after an accident?” Etc. Some of these questions you can find answers to, and others not, but regardless the game will function best if you breeze past these with whatever judgement the group agrees on.

Men at Work is both brisk and tense, with time slowing the crawl as you struggle to place a tiny brick, suddenly aware of every infinitesimal tremor reverberating through your hand with its import magnified a thousandfold. Then, successful or otherwise, time snaps back into place as everyone cheers, laughs, or commiserates your results and the play moves quickly to the next player. One brilliant rule in the game is that, on a failure, the next player must clean up the fallen pieces before starting their own turn, meaning that they run the risk of dislodging other pieces and losing a certificate before their turn even begins, which keeps everyone’s attention on the game no matter whose turn it is.

Men at Work is the board game equivalent of Lay’s potato chips and their “Bet you can’t eat just one” slogan. Because if you are able to pack it in after just a single game then you’re made of sterner stuff than me. Every single time I’ve broken this game out to play it’s turned into 2, 3, or 4 games back-to-back before we’re able to pry ourselves away to play something else. It has just enough complexity and variety for seasoned gamers while offering a low-threshold entry to non-gamers. And who could resist this colorful evolution of Jenga?

At this point, I have had and been playing Men at Work for roughly 4 months. In that time, it has leap-frogged most other dexterity and balancing games in my collection to become (along with the hard-to-find Menara) one of my two favorite dexterity games of all time. Typically, this is the part where I say, no matter what, that you should watch a video or play a demo or do more research before you buy. Not this time. I don’t know that I’ve ever been so confident in recommending a game to just about anyone. The only caveat is the genre. If you don’t like (or struggle with) games that require balance and a steady hand, then this won’t change that. Otherwise, yes, go get yourself a copy now and thank me later.

Click through to read all of “Nothing But Fun in ‘Men at Work’” at GeekDad.If you value content from GeekDad, please support us via Patreon or use this link to shop at Amazon. Thanks! 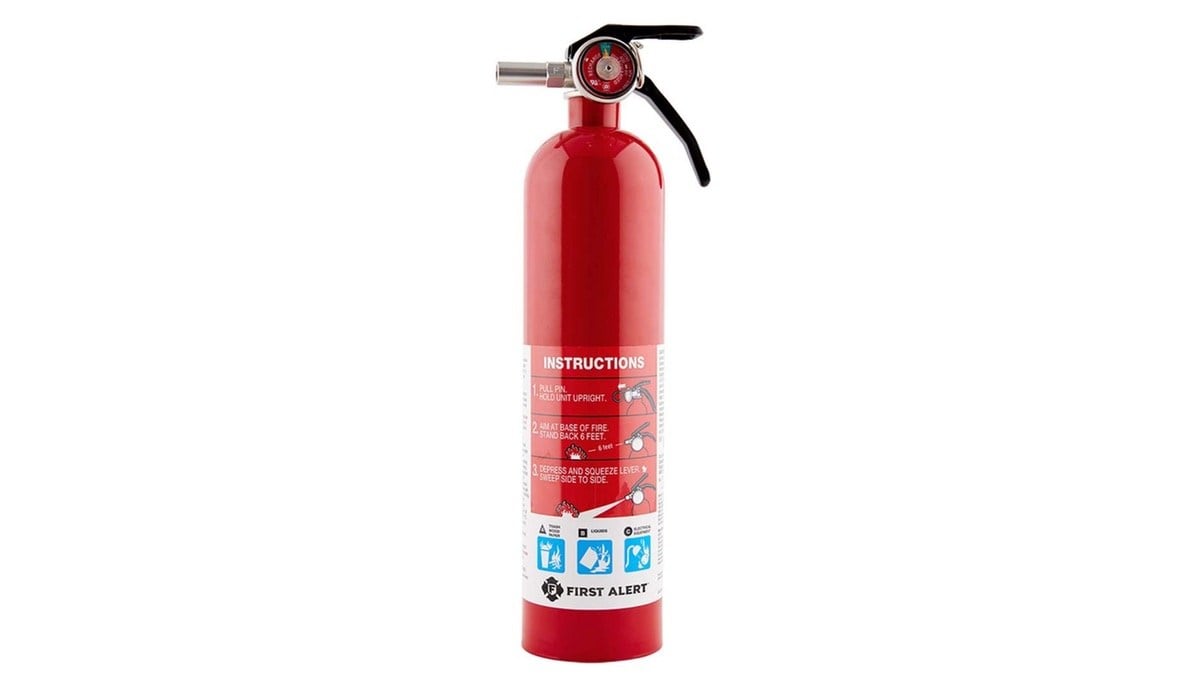 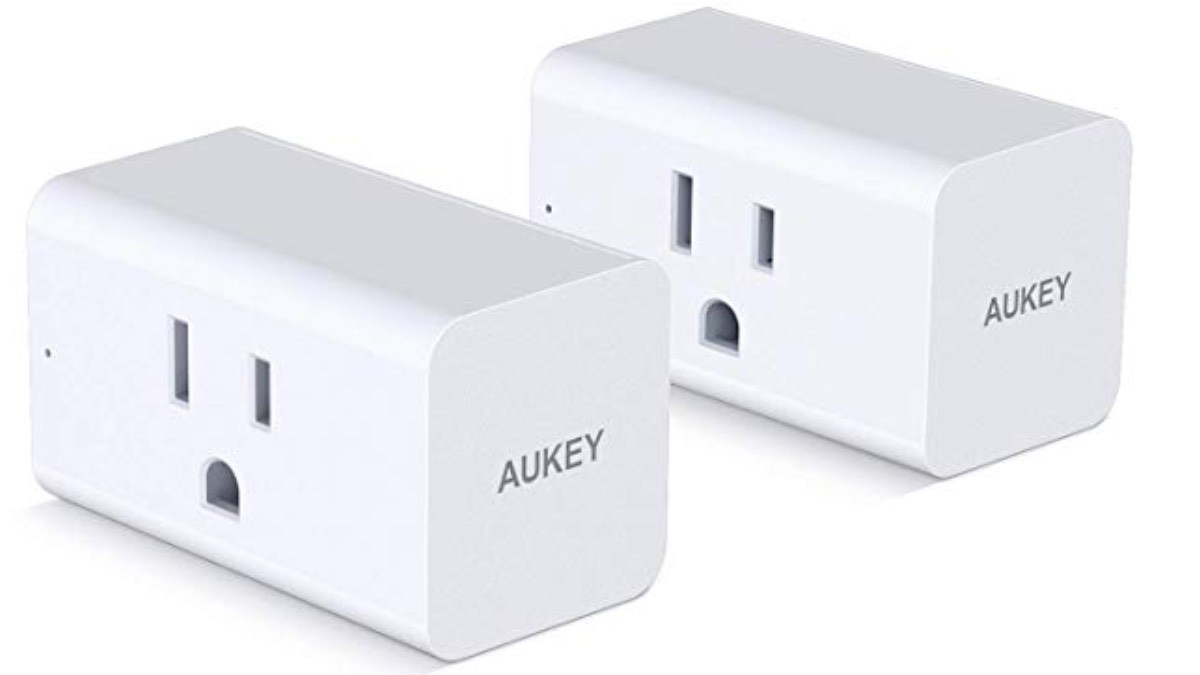 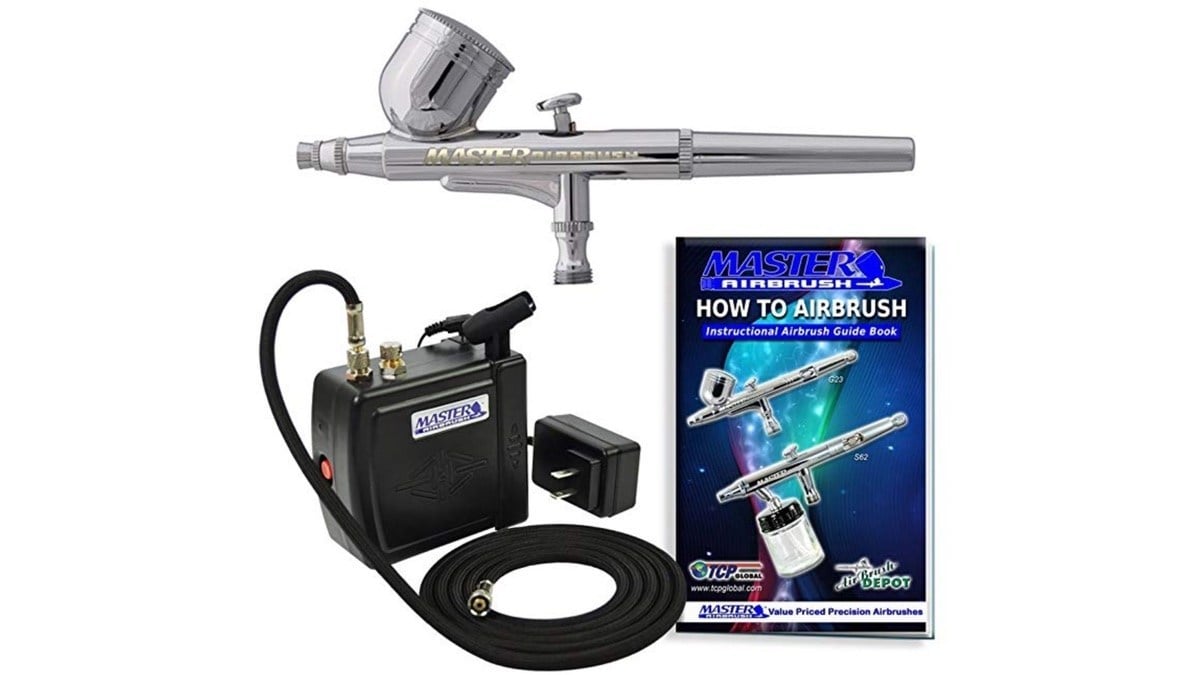