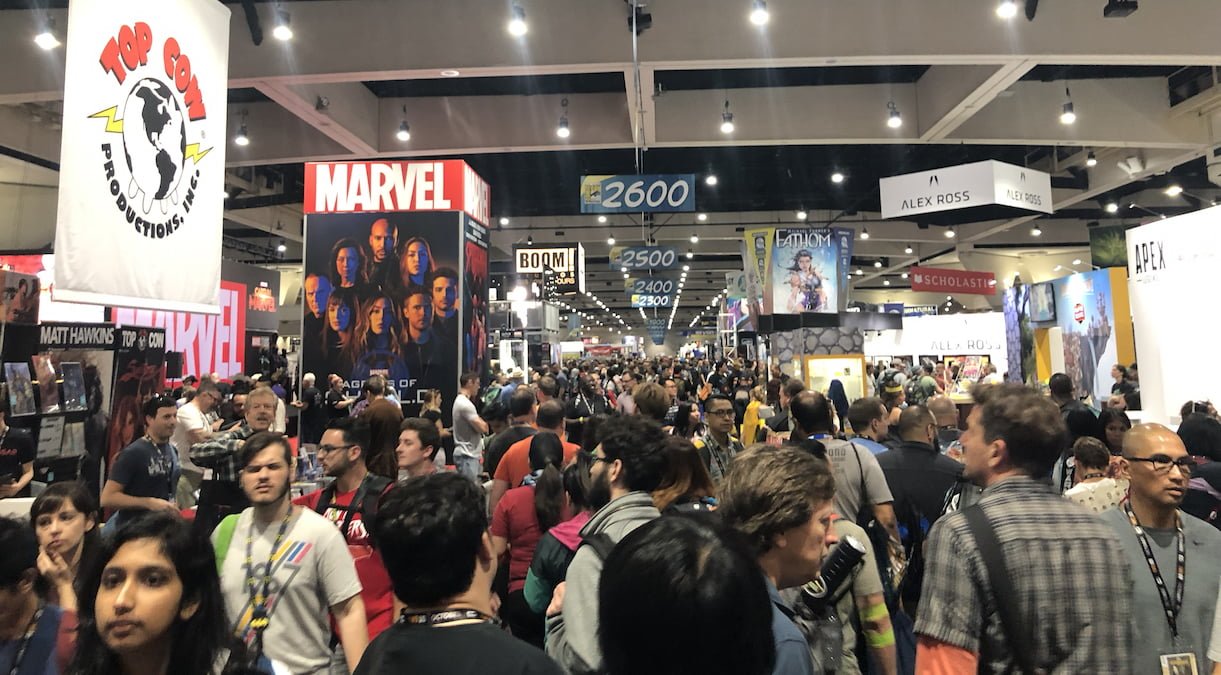 Greetings from San Diego Comic Con! I still can’t believe I’m here experiencing this! I’m taking a break between events so I can give you a summary of the amazing day I had during Day 1 I did attend the preview night too, and I will share some of those experiences with you too. For many of my experiences, I promise more in-depth coverage. Be sure to follow me at @vollmerdp on Twitter and Instagram, as well as @geekmomblog!

Only a limited number of attendees can get the full event badges, which includes the preview night. By my observation, this is when you see mostly the hard core collectors: those who are interested in the convention exclusives from retailers such as Funko, Hasbro, and Hallmark.

I personally took advantage of the smaller crowds to get a lay of the massive convention center, which is 100% dedicated to SDCC. I could see first-looks of the Con exclusives, even though I didn’t want to wait in the lines to buy them. I waited in one line: the Hero Within booth to pick up a t-shirt.

I got to see the massive exhibits by the big-ticket outlets such as television networks, large comic publishers, and toy companies. Having been to my share of trade shows and conferences, it always intrigues me how companies can cram so much content to such a small physical space.

Holy Overwhelming, Batman! This is PREVIEW NIGHT and it's crazy crowded already–Thursday thru Sunday will be more insane! @geekmomblog @comic_con #sdcc19

@elhofferdesign's Totoro sweater is the cutest of cute! It'll work for all seasons! Go visit them at Booth #1135 at #SDCC. I can't wait to wear it later this weekend. @geekmomblog @comic_con #sdcc2019 #sdcc50

Covering SDCC isn’t necessarily all fun and games. Unlike those who are truly there to have a good time and take in all of their geeky passions, we press outlets do schedule some events to be sure to help spread the word about upcoming television, comic, gaming, and book news.

My first stop was the Nickelodeon press room, where I had the chance to meet with some of the legendary cast and crew of SpongeBob Squarepants, celebrating 20 years of the iconic animated series. I was shocked that Bill Fagerbakke started out by interviewing me about the future of teen relationships in an era of internet and online gaming. We ended up discussing what it’s bene like working together for 20 years, inspirations for their episodes, and I learned all about Automated Dialogue Replacement!

What happens with @fagerbakkebill finds out you're a writer for @geekmomblog? He interviewed *me* about parenting geeky kids! We discussed how I navigate with my sons in a world of XBox Live and Pokémon Go! I thoroughly enjoyed chatting with Bill, Mr. Lawrence, and producer @vincentwaller about 20 years of @spongebob on @nickelodeon! @comic_con #sdcc20 #spongebob20thanniversary

On my way out of the Hard Rock Hotel, I had my first celebrity encounter! Colton Dunn of the NBC comedy Superstore!

When you LITERALLY run into Colton Dunn from @nbc's Superstore on the street outside the Hard Rock Hotel. He was kind enough to wait for me when I accidentally took the photo facing AWAY from us! #fangirlmoment #sdcc19 @geekmomblog @comic_con

After my interview (and celebrity encounter!), I zipped right over to the line for the SpongeBob Squarepants Birthday Bash panel, where the full voice cast and producers would be present. Alas, I didn’t get into the panel. I think the event should have been held in a venue that accommodate twice as many people.

Keeping it real for our readers: Enjoying "lunch" while waiting for the Spongebob 20th Birthday Bash panel at #sdcc. Can't complain too much about standing in the tented shade right on the bay. Also a good time to organize my notes and plan for the rest of the day. However, I didn't get into the panel 😞@comic_con @nickelodeon @geekmomblog #sdcc2019 #sdcc50 #spongebob20th

With my tail between my legs in disappointment, I decided to see if I could get into the Superstore cast panel. I did! It wasn’t the most graceful of moves, but I was able to walk up to the NBC representative managing press access and ask, “Did anyone not show up?” And it turns out many press members didn’t show up.

This was the cast and producers’ first appearance at SDCC and they had a great time! I was thrilled to see how well this diverse team works together, even off-screen!

At the last second I got press seating into the @nbc @Superstore panel! What fun — they're discussing Jonah in the quinceñera episode. @comic_con @geekmomblog #sdcc2019 #sdcc50

My day wasn’t done yet! My next event was a special press preview to see The Orville Experience, which was in a building a couple blocks north of the convention center.

This. Was. Amazing! I had the chance to see original costumes, sets, makeup (such as for the Moclans), storyboards, and props! This will definitely deserve its own post later this week!

Waiting for my next @comic_con adventure for @geekmomblog!! A press preview of #TheOrvilleExperience, a curated collection of props and settings from the Fox series @theorville — a show my family has absolutely loved from the start! Come visit starting at 6pm tonight on 1051 J St north of Petco Park. I personally appreciate how the program captures REAL leadership challenges, some of which I've experienced first hand. #butnotholodeckerotica #sdcc2019

Be sure to visit #TheOrvilleExperience if you're over on the Petco Park side of things. 1051 J St. See first hand the original props, costumes, and storyboards from the Fox hit @theorville. @comic_con @geekmomblog #sdcc2019 #sdcc50

Was my evening done? NO! From The Orville event I headed straight over to a lovely reception hosted by Penguin Random House. I had a chance to mingle with several dozen of their authors, including two of my personal favorites, Randall Munro of XKCD and Chuck Wendig of the Del Rey imprint. I was definitely fangirling meeting the two of them!

Day 1 SDCC done! We from @geekmomblog were flattered to be invited to the @penguinrandomhouse reception tonight where we had the chance to talk to many of our favorite authors. The view from the roof the San Diego Central Library was beautiful! Highlights for me included meeting Randall Munro of @xkcdcomic and Chuck Wendig of the @delreystarwars imprint. Thank you for the chance to learn more about Penguin Random House's upcoming offerings! #sdcc2019 #sdcc50

Then we were done! Therefore, last night, I was a bit too tired to summarize my first day. So there you have it! I promise more in-depth discussions of these events later this week, especially the delightful conversations during the Superstore panel and SpongeBob interview.

Shuri #2 The Princess, The Goddess, and The Ex 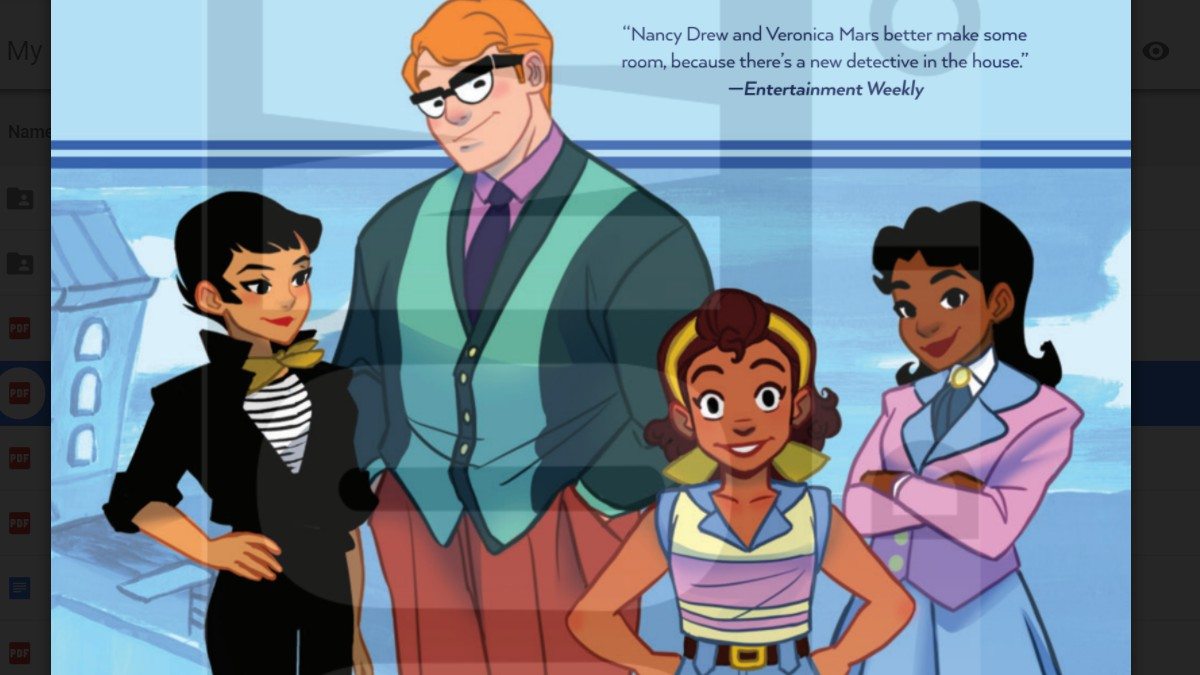 ‘Goldie Vance’: The Detective Comic You Should Be Reading