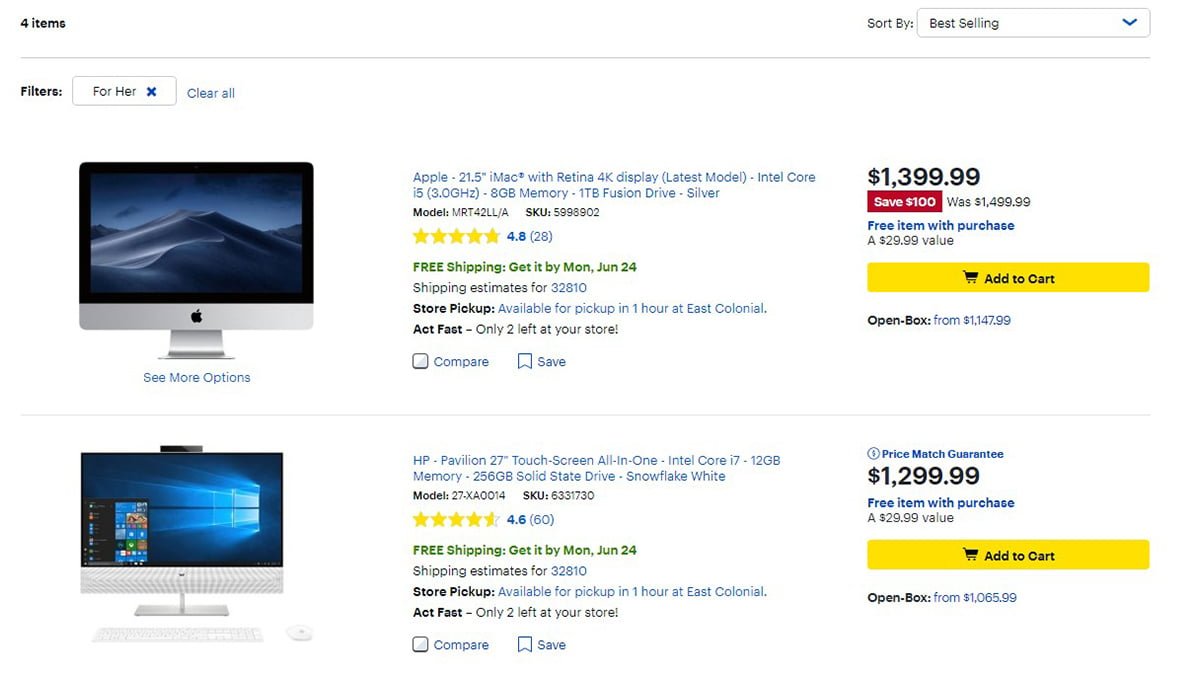 While looking for a new computer at work, I went through the various filters to help me narrow down my options. Processor model, memory, OS, and then I came across the set of filters listed as “Gifts.” This intrigued me. Then I saw the list of options. For Him, For Families, For Geeks, For Teens. My feeling of intrigue went out of the window and was quickly replaced with anger.

To be clear, this is on the USA BestBuy.com website and, to seal their coffin further, I was under the PC Gaming section.

I was shocked by a few things.

One, that they would genderize a computer, to begin with. Two, that if they were going to genderize, they left out “Her.” And finally, when selecting one of the categories it makes medieval assumptions about the demographic.

In an effort to see if this was a site-wide thing, I went to the Desktops & All-in-One Computers which is under the Computers and Tablets section. I found the “Gift” options were more broken down in this section including the hilarious Fashion category followed by For Her and For Grandparents, among others. I’ll be honest, I half expected the For Her category to include pink sparkly computer systems.

Let’s break down what you get with each one, shall we…

My question to Best Buy is this… Who comes up with these filters and why are you making assumptions about the demographics?

Let me update you on a few things.

First, I’m a network administrator. I’m a woman in a (mostly) male field. I shouldn’t have to filter off of the “Him” category to find a PC that has power behind it.

Second, just because someone is a grandparent doesn’t mean they want/need a low-end computer. There are plenty of tech-savvy older generations that know the difference between a Pentium 4 and an i7 core.

Third, your filtering is insulting because it assumes all women want an all-in-one-system. News flash, we don’t. What is it about an all-in-one that makes it for women to begin with?

Which leads me to my final point…

Now listen carefully because I want you to hear me completely on this one, MEN ARE NOT THE ONLY ONES WHO PLAY GAMES!! Women are gamers too. In fact, studies have shown that 48% of the gaming population is female. Your filtering completely forgets this very important point and discriminates against a huge percentage of potential customers.

Despite growing up during the times of “girls’ toys” and “boys’ toys,” I was never told I could only play on the girls’ computers. Both boys and girls played on the same machines in school. Each machine had the same set of specs. They didn’t give low-end machines to girls and high-end to the boys.

In short, go back to the drawing board and consider revisiting the “Gift” filter or, better yet, remove it entirely. You are only excluding part of your customer base because of your outdated assumptions of your customer demographic.

The Mission Is in Sight!