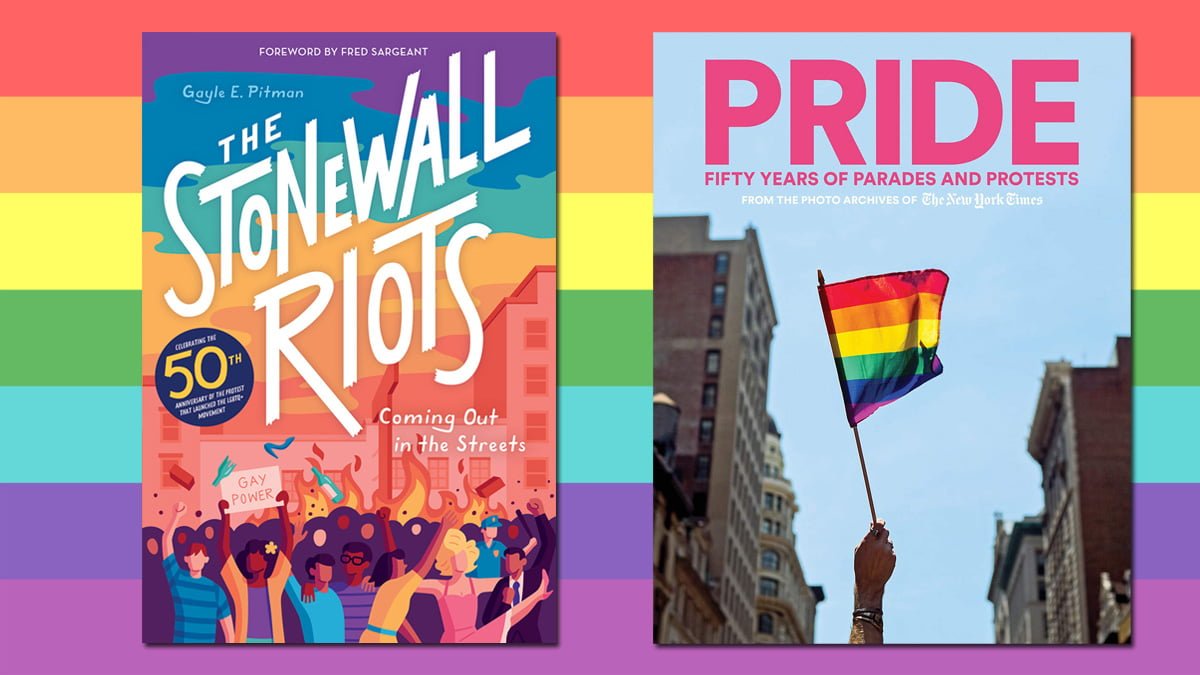 For this year’s Pride Month, I decided to read two books that look back over the history of the Stonewall Riots, Pride, and the LGBTQ+ rights movement. The Stonewall Riots: Coming Out in the Streets is aimed at a younger audience, while Pride: Fifty Years of Parades and Protests is intended more for adults, but both do a great job of condensing many decades of progress into just a few hundred pages.

The Stonewall Riots: Coming Out in the Streets by Gayle E. Pitman

The Stonewall Riots: Coming Out in the Streets is an exploration of the Stonewall riots through 50 objects, one each to celebrate 50 years since the event took place. It is divided chronologically into four sections: Before the Riots, The Riots, Aftermath, and Liberation, although these boundaries are naturally blurred because the existence of certain objects doesn’t always fall in precise timeframes.

After a foreword by Fred Sargeant who was “at the front line of the LGBT movement and.. actively involved in the Stonewall Riots and in the emergence of Pride”, we begin our journey way back in the 1840s with the construction of the Jefferson Livery Stables which would eventually become home to the Stonewall Inn. This early section of the book skips quickly through the decades, jumping between a 1903 sodomy trial transcript, a 1950s television, and a 1968 post-police raid leaflet.

Reaching 1969 and the Stonewall Riots era, we mostly see photographs documenting the events as they unfolded. There are images of protesters, damage inside the building, and even one of Volkswagen Beetle. Away from the photography, we see arrest records, an NYPD issued nightstick, and a parking meter. Every one of these images and items combines to tell the story of what happened at Stonewall in June 1969, or at least the best version historians have been able to put together. As author Gayle E. Pitman notes, people’s memories can be unreliable and with little first-hand evidence, it’s difficult to be 100% accurate about everything.

The later sections show how the events at Stonewall galvanized the LGBTQ+ population into action, there are leaflets and signs, articles and photographs, slogan t-shirts and political patches. All this leads up to the final few items in the epilogue, the Stonewall National Monument Sign and Stonewall Inn today, which show how far LGBTQ+ rights have come in these last 50 years.

This was a very interesting book that really helped me to understand more about what happened at Stonewall than just the myths which have sprung up around it over the decades. It is written in an easy-to-read style that will make it accessible to young people but never comes across as patronizing or dumbed down. Instead, there is a considerable effort made to explain the history of the chosen objects, how they were relevant at the time, and why they were important. I found the explanation of why leaflets were so useful in a time well before the advent of social media particularly insightful.

The one thing I didn’t like about this book was the choice to print it all in black and white. The cover is so bright and attention-grabbing that it feels like a let-down every time you open it to find page after page of dull, greyscale pages. The swirling background on many of the pages looks as if it were designed to be printed with a subtle rainbow hue, but instead, it looks like the sky on a cloudy, miserable day. Sure, it’s not a major thing, but given that the LGBTQ+ rights movement is synonymous with color (the flag is a literal rainbow!), printing a book about it in greyscale feels like a very odd choice.

The Stonewall Riots: Coming Out in the Streets will be a great read for anyone interested in the history behind one of the 20th centuries biggest social movements, and will make a great gift for any young person finding their identity and for young queer people who want to know what life was like for those who came before them and paved the way to the more tolerant world we live in today.

Pride: Fifty Years of Parades and Protests by The New York Times

Pride: Fifty Years of Parades and Protests is a look back through the archives of the New York Times, beginning with the raid of the Stonewall Inn in 1969 and ending in November 2018. Given that this book uses selections from the archive of a single paper there’s a clear bias to the reporting, both in terms of tone and the locations featured which are heavily NYC-centric.

The book is broken into sections by decade, beginning in the 1970s, and each section opens on a page which shows a collection of headlines taken from the paper over those years. Seen together, you can appreciate the overall themes of the LGBTQ+ rights movement in that decade and also the way the language surrounding the movement has evolved over the years. The headlines of the 1970s prominently mention psychiatry and therapy, while the term “homosexuals” is ubiquitous. By the 1980s, “homosexual” has been replaced by “gay” and the AIDS crisis is the standout subject matter. Skipping forward to the 2010s, we can see headlines focused on gay and equal rights with the term “transgender” firmly on the radar.

The vast majority of Pride: Fifty Years of Parades and Protests is made up of photos and while it is indeed interesting to look back through several decades of images, they quickly became repetitive because there was so little detail to go with them. Most of the captions shared little more than a date and simply “New York” as a location. One photo of a Pride parade looks much like any other when that is the extent of the background information going with it. It was pretty fascinating watching the visual changes through the years, from fashions to police attitudes, but I would have preferred to know more about what I was seeing in these photos.

The real substance of Pride: Fifty Years of Parades and Protests are the reprints of articles from the paper. These were truly fascinating to read through, although I would have really appreciated them being typed out on the opposite page because decades-old, scanned and shrunken newsprint is pretty hard to read. The subjects of these articles range from conversion therapy and the psychiatric standing of homosexuality to reports about major protests to coverage of the gradual decriminalization of just being gay. There is an article on the death of Rock Hudson, significant coverage of AIDS, and several pieces discussing military policies around homosexuality and transgender individuals.

Admittedly, this is a somewhat dry book with little in the way of opinion pulling all these articles and photos together and giving a modern-day perspective. Instead, it is a showcase of LGBTQ+ rights movement history as seen through one specific lens. As a resource for research it is outstanding (a friend who studies the AIDS-related play Angels in America commented that she had needed to hunt through archives to find a copy of the article about it reprinted here) and it is certainly an eye-opening read for those of us who grew up in more accepting times to see first-hand accounts of life for the gay community just a few decades ago. While I would have liked to see a few changes here and there, this is a wonderful book for anyone interested in social history and/or the LGBTQ+ rights movement.

Education Week: College and the GeekMom