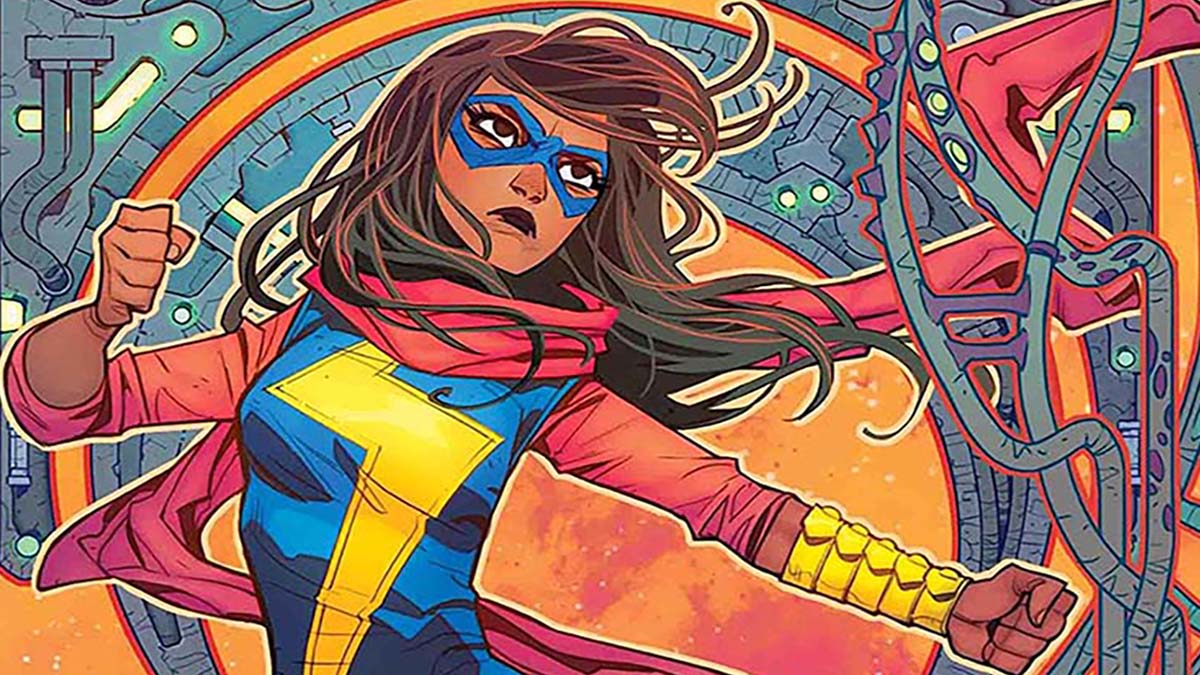 The Magnificent Ms. Marvel #1 inaugurates Kamala Khan’s new series with a splendid look at who Kamala Khan is both in an out of costume. Saladin Ahmed did a very good job writing Kamala in a way that honors the original series by the character’s creators Sana Amanat, G. Willow Wilson, and Adrian Alphona. At the same time, Ahmed gives us a fresh take on one of Marvel’s most celebrated young heroes that both longtime fans and new readers alike can enjoy.

Readers who’ve never been introduced to Kamala before can grab The Magnificent Ms. Marvel #1 and instantly relate to the struggle she faces pursuing her desire to use her powers to make a difference while simultaneously maintaining a budding romance, and facing opposition from parents who don’t understand that her lifestyle choice. By juxtaposing the challenges of an everyday teen with the intensity of battles with interplanetary villains, Ahmed begins an arc full of angst, family, humor, action, and honor, while reminding us that sometimes our personal battles are more challenging than galactic threats.

Minkyu Jung’s art stays true to what long time readers expect for Ms. Marvel’s style while adding a fresh look to the comic demonstrating that he’s an excellent choice as Ms. Marvel’s new artist. His vibrant artwork felt right at home with the Ms. Marvel that I’ve come to love. Jung’s dynamic art enhanced Ahmed’s story by transitioning seamlessly from the “ordinary” moments in a young girl’s life to the high-action heroics of a superhero in a matter of panels.

On the whole, the new creative team did a magnificent (see what I did there) job of crafting an opening issue that spells out precisely who Kamala Khan / Ms. Marvel is and why she is so well loved. The Magnificent Ms. Marvel #1 is the perfect place to start if you are looking to get into a new series from the beginning. It’s on my pull list, and it should be on yours.

Spoiler Warning: If you have not read The Magnificent Ms. Marvel #1, There May Be Spoilers Below 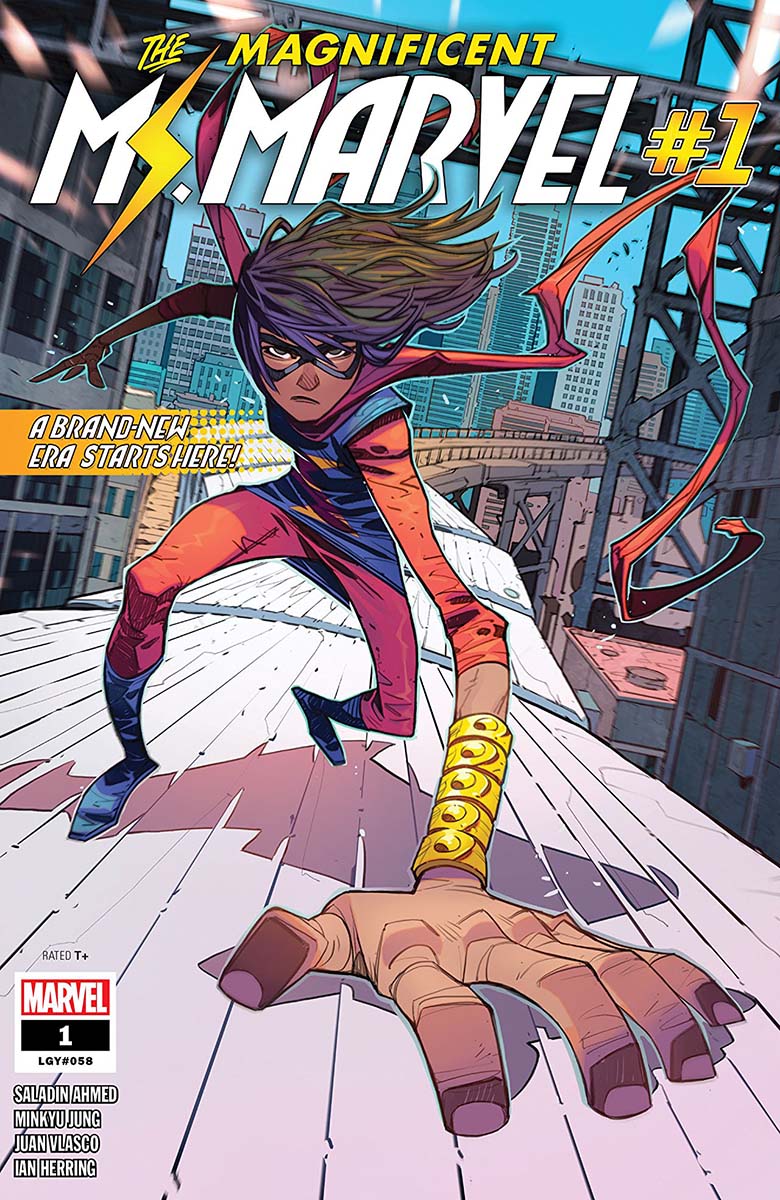 Kamala Khan as Ms. Marvel was created by Sana Amanat, G. Willow Wilson, Jaime McKelvie and Adrian Alphona. She’s a teenage Pakistani American from Jersey City, New Jersey who idolizes Carol Danvers. Upon discovering that she has Inhuman genes that give her shapeshifting abilities, she assumed the mantle of Ms. Marvel from Danvers after Danvers became Captain Marvel. Kamala is also Marvel’s first Muslim character to headline her own comic book. She remains Captain Marvel’s biggest fan.

I love the The Magnificent Ms. Marvel #1 cover. Petrovich gives us a Ms. Marvel mid-fight who’s chasing down evil with Jersey City in the background. The look on her face is fierce determination. Kamala’s been a hero for a while now. She’s good at what she does. She has conviction that she’s making the world a better place and we see that all in her face on this cover. 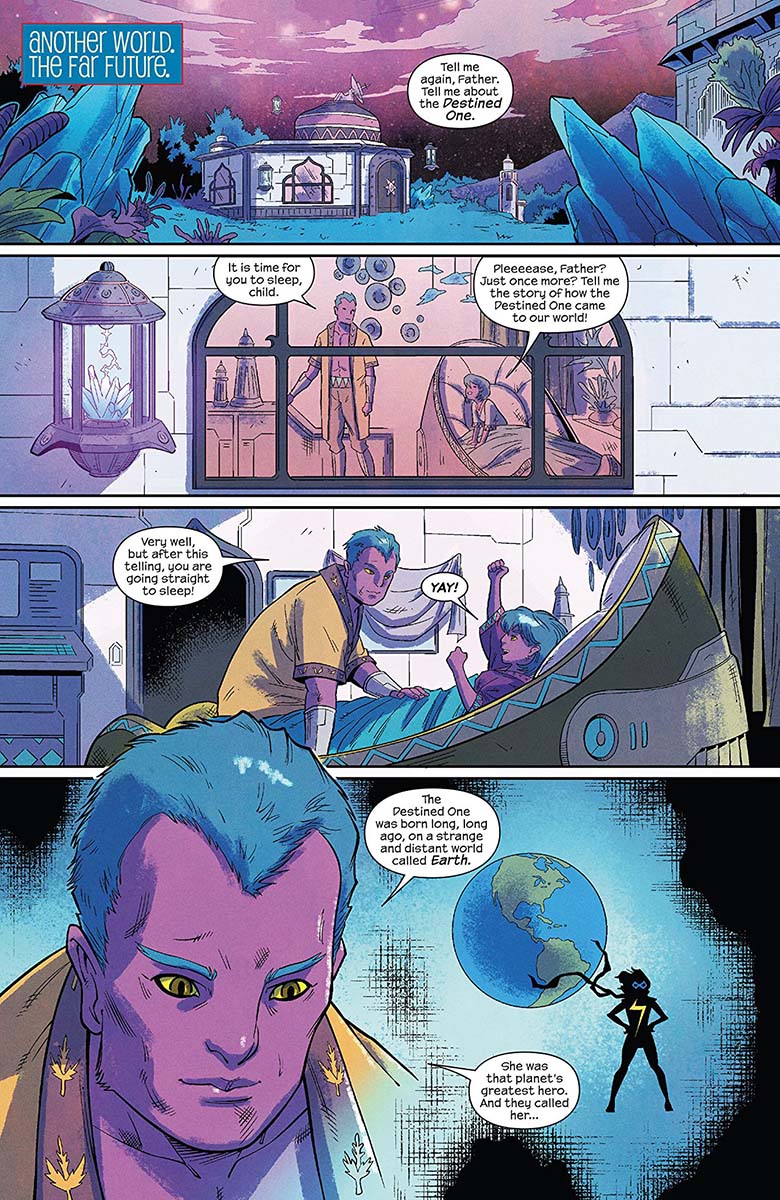 The narrative structure of The Magnificent Ms. Marvel #1 teases a much larger story for this new era than we see in this initial issue. The book opens in the distant future as child begs their father for a bedtime story about The Destined One. The father’s narration weaves throughout the entire issue culminating in a brilliant cliffhanger that coincides with a devasting moment in Kamala’s life.

The old trope of superheroes larger-than-life powers wrestling with entirely human issues is giving a fresh spin. Kamala already has an origin story but it looks like she’s also embarking on a fresh origin that will take her beyond the limits of Jersey City. I’ll confess I’m excited to see where this goes. 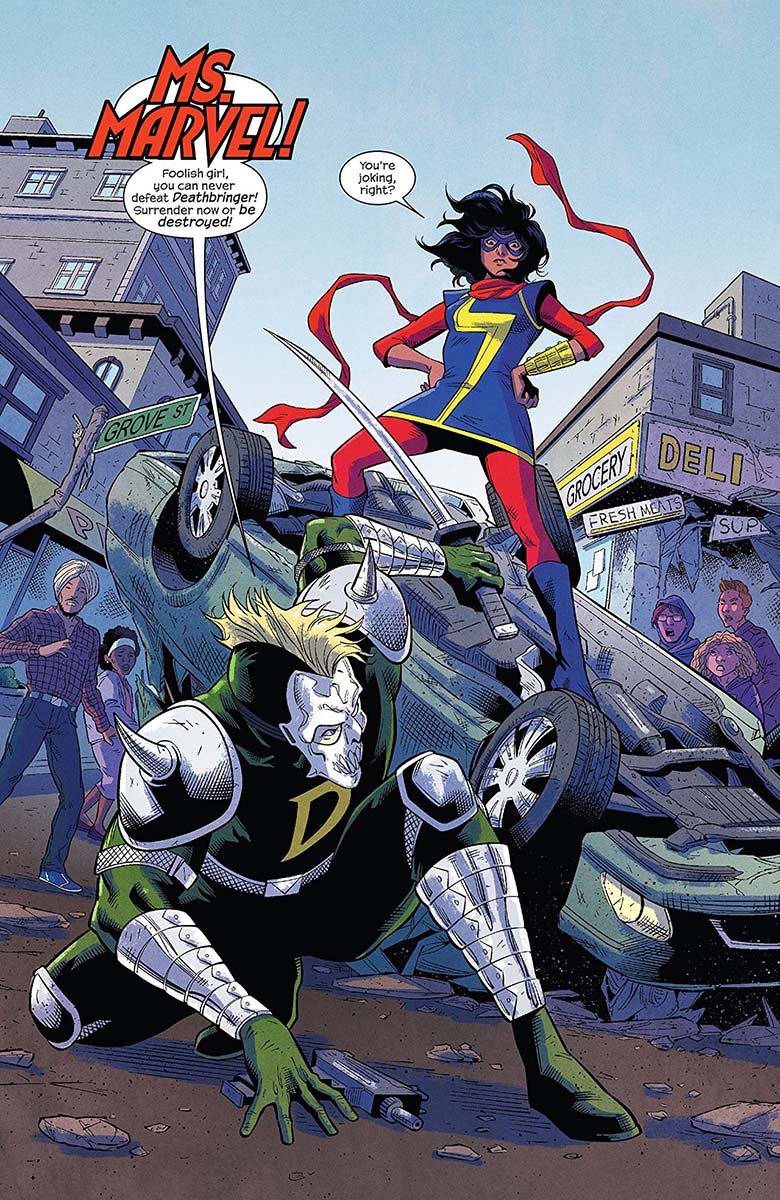 No So Normal Life

In The Magnificent Ms. Marvel #1, Ahmed brings the seemingly mundane aspects of Kamala’s story to the forefront, and interweaves them with Kamala’s daily life creating an engaging narrative structure that reminds us that Kamala is not just a super hero or a simple teen-age girl. She is a whole person with a life that matters and people she adores.  This has been much of the strength of Kamala as Ms. Marvel just as it is the core of Peter Parker & Miles Morales as Spider-Man.

It’s the feel of a local hero committed to making a real difference in the space that they live their lives. Sure, they sometimes get caught up in bigger things, but their primary commitment is to their people, their city, and their home turf. It was great to see Ahmed bring that same energy and loyalty from his Miles Morales run to The Magnificent Ms. Marvel #1.

Ahmed makes it clear that Kamala’s no longer a newbie. She’s a seasoned hero for whom beating up bad guys and rescuing those in distress is second nature. Ahmed then reminds us that being a normal teenager is the real challenge for our young hero. We watch as Kamala rushes in late to catch up with a friend, argues with her traditional parents about her less than traditional life, and evades a relationship discussion mid-battle. She wrestles more with these issues than with any Alien marauders she encounters. Ahmed keeps our view of the two worlds Kamala lives in alternating counterbalancing the struggles of one with the challenges of the other in such a way that Kamala’s whole life remains intriguing. There is no missing that Ahmed’s Ms. Marvel will be just as multidimensional as she has always been. 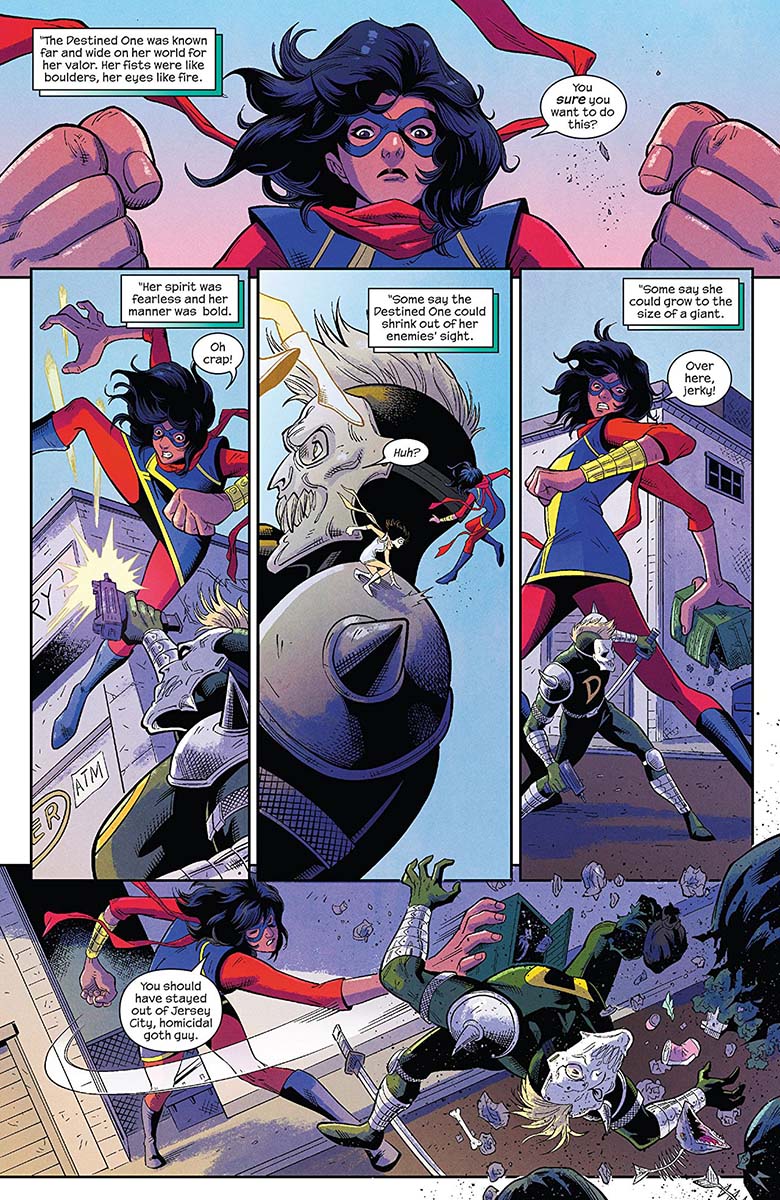 With Ahmed’s writing and Jung’s are giving our beloved hero a lot of new, it was comforting to have the consistency of Ian Herring’s color work and Joe Caramagna’s lettering to provide some visual continuity.

This new creative team has blended well in this first issue giving us a dynamic freshness while keeping us grounded in all the things that made Ms. Marvel such a hit. When a new team takes over, often it can be jarring and obvious. This team as a whole has done an excellent job. The writing is engaging and solid, keeping the foundations of Kamala’s character while promising new and exciting adventures. The art is fresh and lively, with attention to the emotion that makes much of Ms. Marvel’s life so powerfully intriguing. Jung’s excellent art is enhanced by Herring’s iconic and gorgeous colors. This book is not perfect but on the whole is flows well, feels true to it’s predecessor, and yet moves forward. I’m looking forward to future issues.

The Magnificent Ms. Marvel #1 is easily a safe and entertaining read for anyone over the age of twelve and probably fine for most ten or eleven-year olds. That’s not to say that only Teens and Tweens will like The Magnificent Ms. Marvel #1. This is a book that most comic books fans can enjoy. If you love Miles Morales or Peter Parker and you haven’t checked out any of Ms. Marvel’s previous run then this is a great issue to grab. 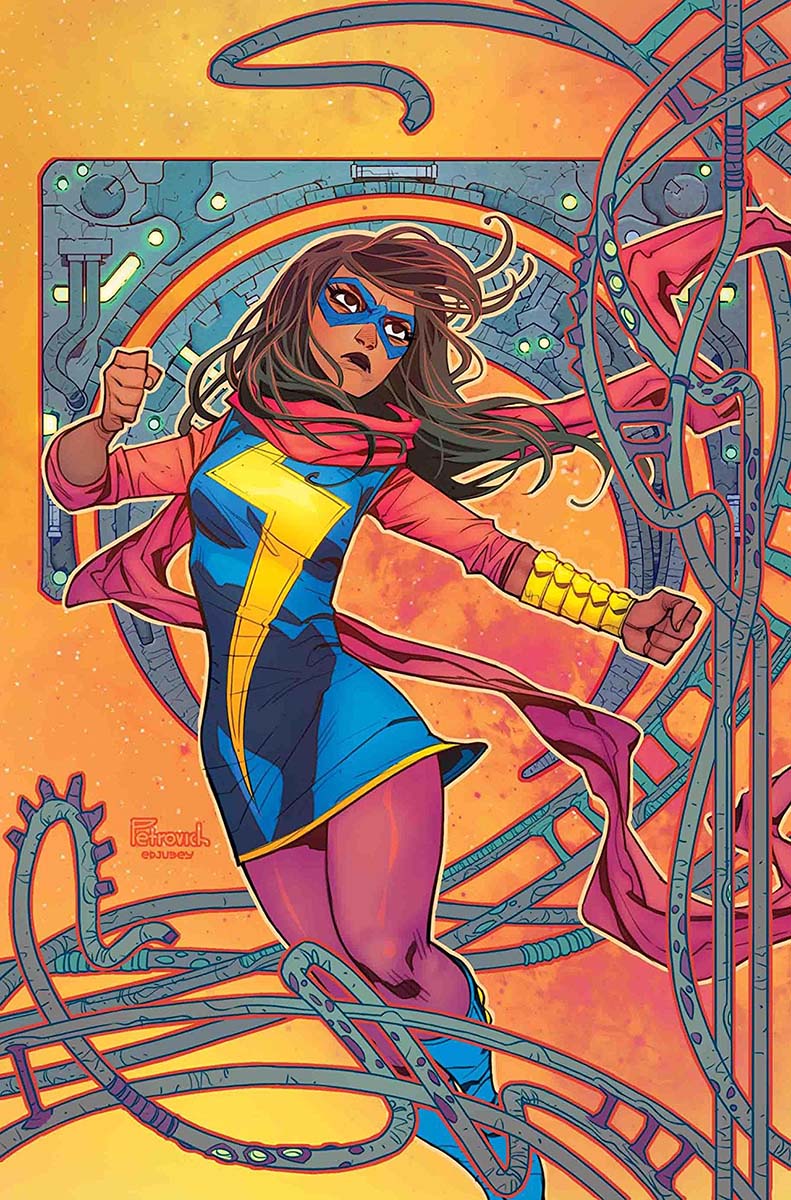 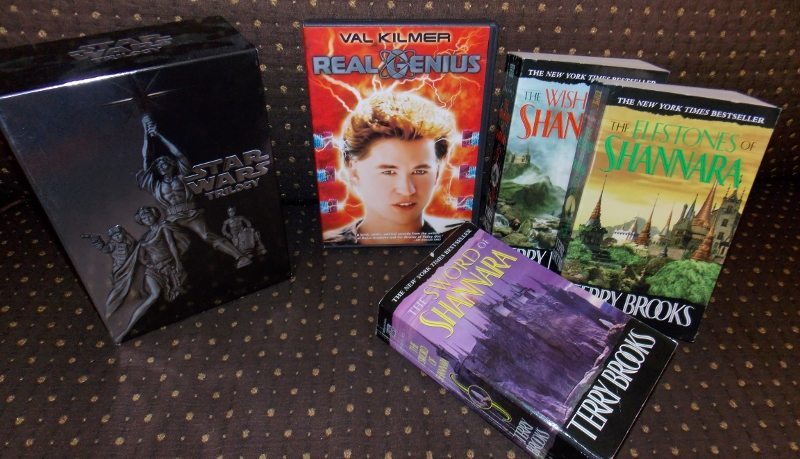 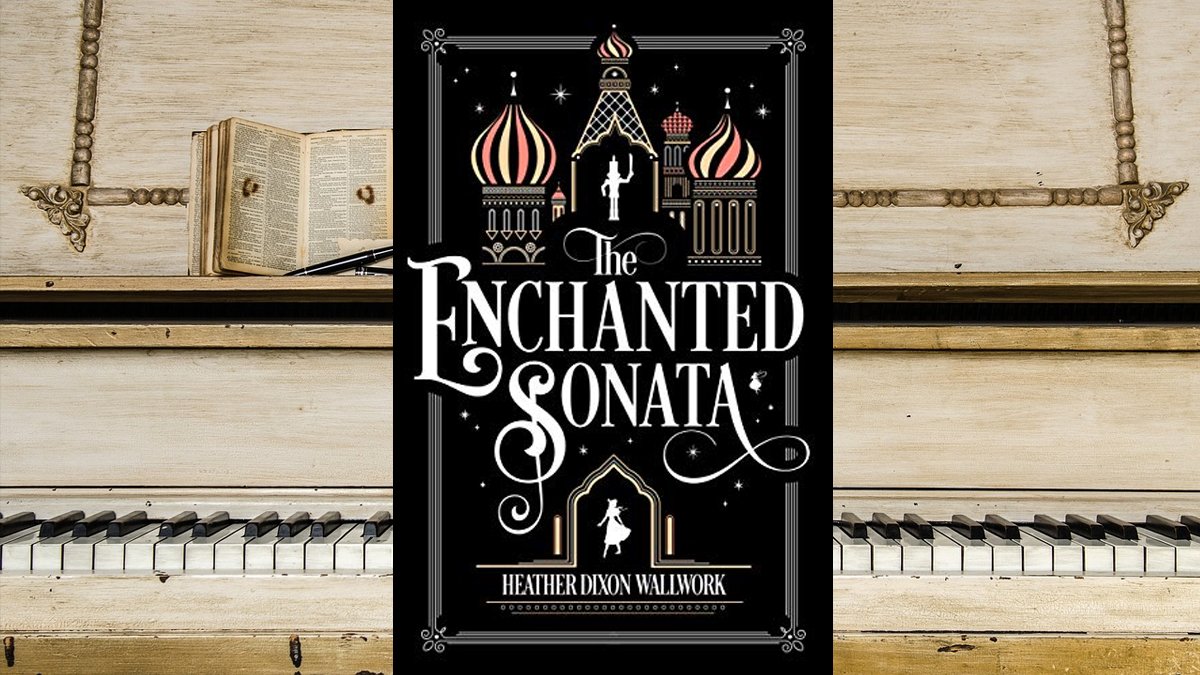 ‘The Enchanted Sonata’: A Lovely Twist on ‘The Nutcracker’ Tale

20 thoughts on “‘The Magnificent Ms. Marvel #1’ Honoring the Past, Moving Toward the Future”