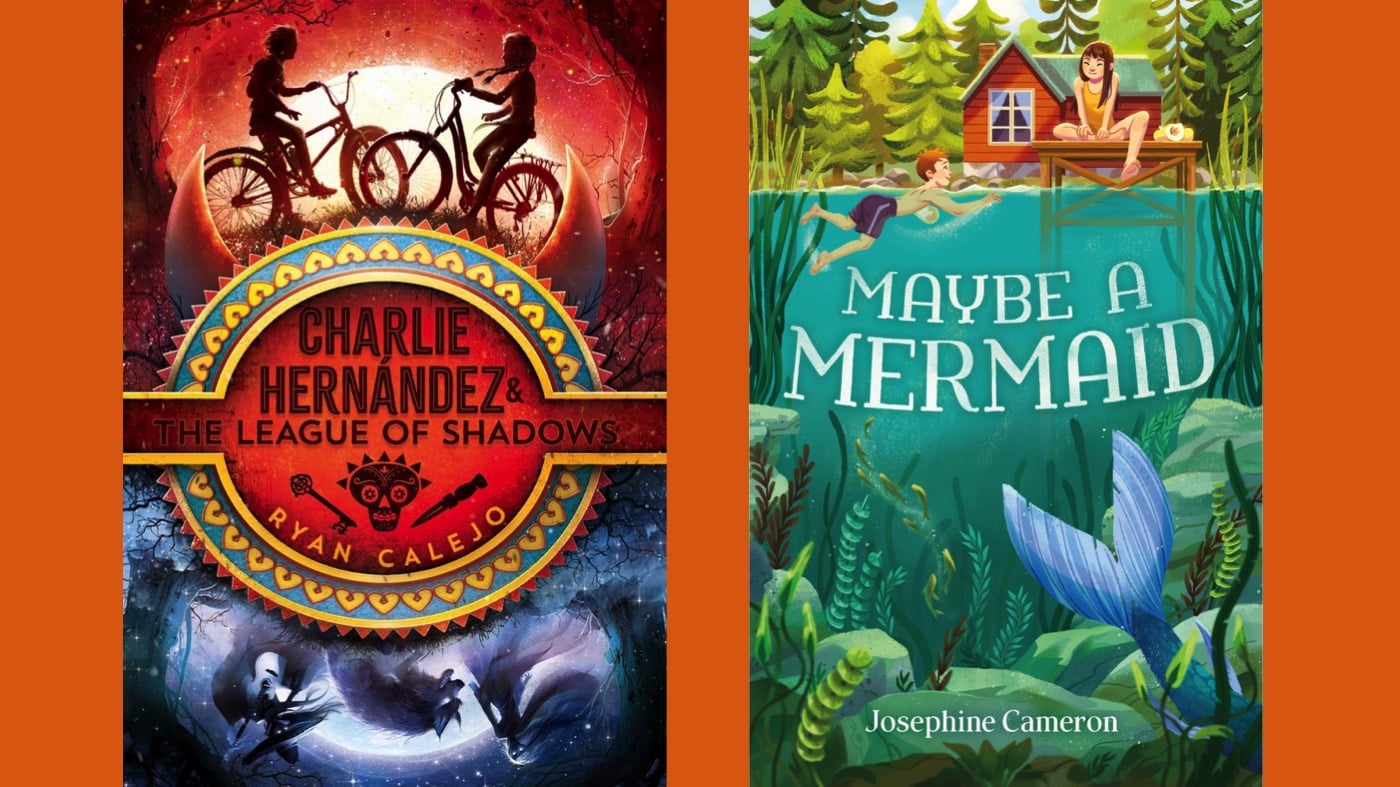 Late elementary and junior high is such a magical time for reading.

Many people cite the books they read as impacting them forever. For me, seventh grade was when a friend gave me a fantasy book (Piers Anthony) for my birthday (“You like dragons and fairies, right?) and my eyes opened to the wonder of the genre that I still consider my favorite.

My nieces are nine and twelve, exactly at this impressionable spot for reading influences, and whenever I am given books to review, I usually think of them. If I won’t pass it on, it’s not good enough to post here. Luckily, I found two recent books that I’ll be passing their way: Charlie Hernandez and The League of Shadows by Ryan Calejo, and Maybe a Mermaid by Josephine Cameron. Both are magical reads in unique ways.

Charlie Hernandez and The League of Shadows by Ryan Calejo

The importance of our family’s history and stories feature predominantly in Calejo’s first novel.

Charlie Hernandez is a bi-lingual middle-schooler in a band with his two best friends and has a big crush on Violet Rey, an investigative reporter for the school newspaper. Charlie grew up hearing (and being quizzed on) the folklore that his late abuela, grandmother, told him from the Spanish speaking countries of Central and South America.

Sadly for Charlie, his parents disappeared a couple months ago and his house mysteriously burned down, leaving him in the care of a nice, old lady in the foster care system. Suddenly, those old tales come to life with mysterious creatures that appear in his town and his own body that starts to transform into something…other (horns and feathers?) Violet notices and volunteers to help figure all of this out, not being able to turn away from a mystery. Charlie would rather just play in his band, but if he’s going to find where his parents are, he’ll have to jump into surprising (and often humorous) adventures.

As much as I enjoyed this book, it made me wonder what I was missing. My grandfather immigrated to America from Ecuador as a young man. Like many immigrants of that time period, he did not teach his children Spanish or any of the culture he left behind, wanting them to be “American.” Sadly, he died when I was a little girl and all the stories of those ancestors are lost.

I love stories. Reading The League of Shadows was a peek into the legends of a family I never knew. Even if your family tree grew from other continents, the creatures and myths Charlie and Violet encounter will fascinate and entertain anyone. For example La Calaca, a chatty and helpful skeleton who is still upset about breaking up with La Llorona, the Crying Lady who kidnaps children.

Charlie has to draw upon his knowledge of the legends to make it past all the creatures that are trying to get him, and figure out why they want him in the first place (and why his left hand suddenly turned into a claw!) Charlie is a likable boy with a down to earth manner, even when confronted by strange monsters. His relationship with his best friends, Alvin and Sam, are very believable, and his longing for his missing parents is honest, but never dwelt upon, keeping the overall mood of the book fun.

The girls Charlie interacts with are not as real- the bully at school is silly, and Violet is a bit too perfect, but this does not detract from the entertainment of the novel for both boy and girl readers. Although Charlie is our hero, the girls are shown as tough and more than capable. The monsters in the books are equally scary and powerful regardless of gender. In fact, I highly recommend it for all because Calejo has a stellar 50% female character speaking ratio. (Yes you CAN have great books with equality in gender!)

I was also impressed with how Calejo incorporated Spanish words and phrases into his novel that are completely accessible to English readers. Either the English word follows right behind or Charlie translates for Violet who is his constant English-speaking companion. It gives the story a distinct style without any confusion. Pick up The League of Shadows for a wild (and funny) ride.

Diversity: Very good. The main character is Latino and the creatures he meets are all from Spanish-speaking cultures.

Maybe A Mermaid By Josephine Cameron

What a sweet book.

Anthoni Gillis has heard all the jokes about her “boy” name when meeting a new group of kids. Her mother is a sales representative for a multi-level marketing company called Beauty and the Bee and this means traveling to a new place every few months, figuring out the social scene, and trying not to be alone at lunch.

By the time she reaches eleven years old, all the adventure is gone and Anthoni wants to have a steady home with one good friend, a True Blue Friend. Her mother decides they need a vacation and takes them to her family’s favorite resort from when she was a girl on Thunder Lake. Unfortunately, it hasn’t been renovated (or cleaned) in decades and the owner is an eccentric old lady named Charlotte. When Anthoni finds out her mother wasn’t actually taking a vacation, but running away from paying their last landlord, the young girl is desperate to find something amazing- like in her favorite comics: Wolverine from X-Men, which she compares herself to throughout the book in a nerdy charming way.

“For months, we’d been stuck at that moment when Wolverine’s a goner, backed into a corner by a guy whose skin is impervious to metal, and you can’t help but wonder if this really is the end.”

Although at first, it seems their time at The Showboat Resort at Thunder Lake is going to be dismal. Anthoni and her mom do their best to turn things around.

“That was the thing about Mom. Even after our entire Five-Year Plan had fallen apart, the Gillis Girls trust had evaporated, and The Showboat Resort had turned out to be a tragic dump, she could find a way to laugh. Mom never waited for magic to come to her. She made her own.”

Every morning, Anthoni hears a big splash into the lake, but when she tries to find out what’s making it, the creature is very elusive. Her mother tells her of the legend of mermaids in the lake and Anthoni starts to wonder. After many mornings with no luck, she finally sneaks a peak of Charlotte, the old lady who owns the place, diving in. At first disappointed, Anthoni is shocked when Charlotte doesn’t come up for air. At all.

Anthoni meets some kids her age, including Maddy who was a potential for a True Blue Friend. Using her mother’s multi-marketing strategies as a guide for life, Anthoni sets out to win Maddy’s friendship with Action Steps: Meet Potential Clients, Narrow In, Develop Trust, Discover Her Secret Dream, Do What It Takes.

Along the way to her goal, she meets DJ, an accident-prone boy who is silly and smart and obsessed with rocks and minerals. She and DJ take over an abandoned cabin in the woods to hang out and display his rock collection, but this attracts the attention of Charlotte who is the “scary lady” in the town. DJ and Anthoni start visiting Charlotte who used to be in show business and has lots of stories and tricks up her sleeve. She also doesn’t confirm or deny that she’s a mermaid, much to Anthoni’s frustration. Meanwhile, she is getting closer to securing Maddy as a True Blue Friend, if she can prove mermaids exist.

I really enjoyed the characters in Maybe A Mermaid. The group of kids Anthoni tries to hang out with aren’t all friendly, but there isn’t a mob mentality either, which I appreciated. When one kid says something rude, another will call them out on it. I found that a refreshing take on the genre of trying to fit in.

There isn’t a bully, but not everyone is welcoming either- it’s realistic. While trying to figure out the mystery of the mermaid, Anthoni does find her True Blue Friend, but the path getting there isn’t what she originally thought.

Diversity: The ethnicity of the characters isn’t specified, and most don’t even have any physical descriptions beside DJ (freckles and white skin). The last names are not ethnically diverse.

Confessions of a Lonely Geek