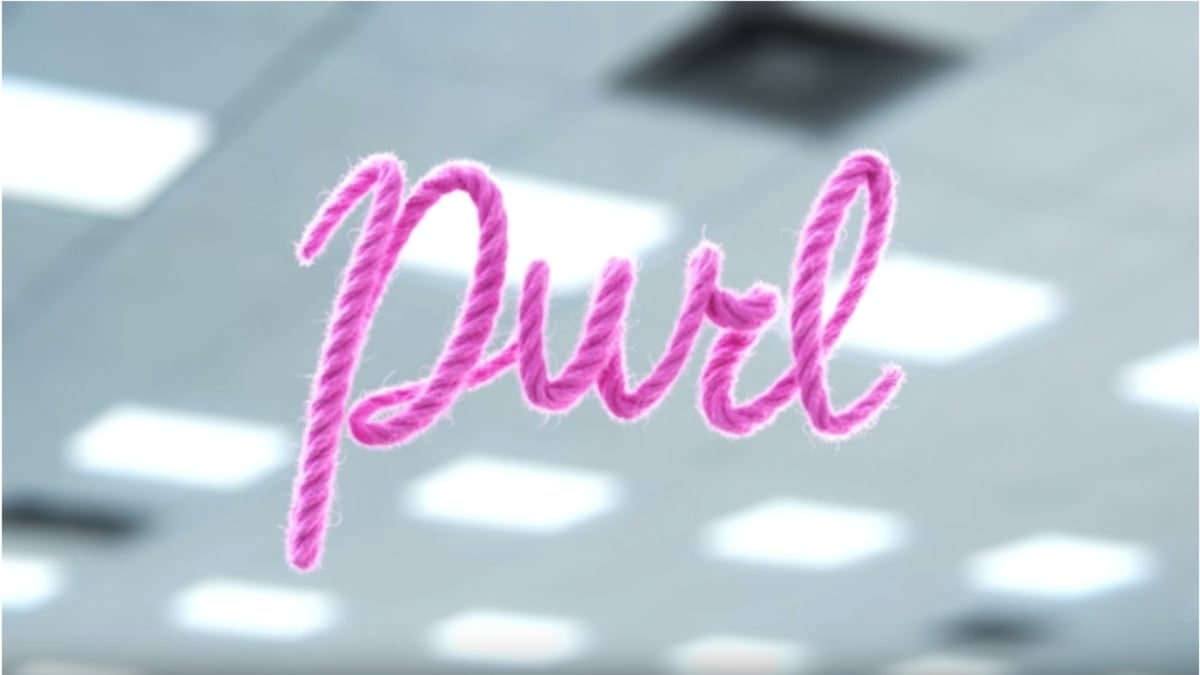 Last week, the new Pixar/SparkShorts animated short, Purl, hit viral status. After all, anything Pixar wins the internet. If you’re a knitter, crocheter, fiber spinner, or general crafter with anything that resembles thread or fuzzy stuff,  you probably watched it a million times, just chuckling about the inside jokes. What people outside the fiber community might not realize is that Purl, and its titular character Purl, use fiber community in-jokes and hierarchies as a larger commentary for society.

Purl is a short animated film that follows a pink yarn ball as she joins B.R.O. Capital. On Purl’s first day, her excitement rapidly fizzles when she realizes that, as the only female ball of yarn at the company, all the white men treat her as an outsider. They stare at her, mock her, ignore her ideas, and leave her behind when they go out after work. When Purl reinvents herself to their model, they accept her as one of the group. However, at the end of the eight minutes, Purl realizes that she needs to be true to herself, which ultimately leads to a more inclusive company environment.

What was the inspiration for Purl?

According to a short video posted online, Purl’s creator and director, Kristen Lester, based the short on her early experience in the animation industry. Just as the B.R.O Capital guys seem shocked that the company hired a ball of yarn, so were her peers shocked to see a woman. The same way Purl tries to change herself, so did the animator. In the end, just as Purl realizes in the right environment she can thrive as herself, so did Lester.

What is the “fiber community”?

If you do any crafting that involves fuzzy stuff, you already know this term. People who sew, knit, crochet, spin yarn, embroider, do cross stitch—we’re all part of the fiber community. Although called “crafting,” it’s different from using glue sticks and construction paper. Not that those can’t be beautiful works of art, because they can, but because it has a long history of being female-focused and, often, highly skilled.

The fiber community, especially in its online iteration Ravelry, is often considered a group of women who bond over their shared interest. While many still mock the “old lady knitter” motif, many within the fiber community are young (and men!). Pretty much, it’s a geeky community based on all crafts related to, well, fiber.

Why a ball of yarn is feminist

To understand the importance of Purl’s yarnhood as a metaphor for feminism, we need to discuss a bit of the history of knitting and fiber arts.

Although modern usage of the term “spinster” comes with the “unmarried crazy cat lady” connotation, its history is one of empowerment. In the Middle Ages, way before the Industrial Revolution, all clothing needed to be handmade. Clearly, we can pretty much guess at that. However, to make clothing, you needed fabric. To make socks or stockings, you needed the raw material. So, you needed someone to make the yarn that made the fabric or could be knit into stockings. Spinning yarn, although not generally afforded “trade” status, was one of the few types of work available to women. Moreover, textile trades were one of the few that allowed women to apprentice. Thus, although tradeswomen would obtain more rights when married, they could also earn wages through these trades if they did not marry.

Although machines eventually became more useful in textiles, women spent much of the 1700s, 1800s, and early 1900s using knitting and other fiber skills to help men in wartime.  Spinning bees during the Revolutionary War became some of the first “stitch ‘n’  bitch” gatherings, where women gathered over fiber arts to create communities. During World War II, women acted as spies by knitting code into garments. Feminist historians pretty much seem to agree that knitting has a history of political dissent.

In other words, if you’re going to choose a metaphor for female dissent and empowerment, a ball of yarn is pretty much perfect.

What to know about Purl’s “crochet joke”

An overview of the joke

When Purl first tries to fit in with the “Bros,” she overhears them making demeaning jokes around the watercooler. The whole goal of the Bro joke is to set up a punchline that mocks someone else. Trying to join in, Purl’s joke needs to do the same.  So let’s look at what happens:

Bro: What’s the difference between a porcupine and a BMW? With the porcupine, the pricks are on the outside!

Purl: So why do spiders weave webs? Because they don’t know how to crochet!

OK, so it’s totally innocuous. I 100% loved it. But, I also noticed that there was a definite fiber community issue raised in here that merits a quick discussion. However, let’s take a look at a quick literary term that sheds a little light on why the joke is funny.

People understand language through what we call “binary opposition.” Basically, words have meaning in relation to the terms around them. When we read or understand language, we place two ideas together and create a good/bad relationship between them. For example, we understand the meaning of “hero” because we place it opposition to “villain.” That’s the short answer, so if you want a more detailed discussion and understanding, you can read this blog post by a teacher.

Although the fiber community is generally friendly, there’s also some good solid intracommunal ribbing and tension (for those of you fiberists—did you see what I did there? I kill me). Sometimes, to be honest, knitters are a little bit snobby when they talk to crocheters. All you need to do is a quick Google search for “do knitters look down on crocheters” and you get this: 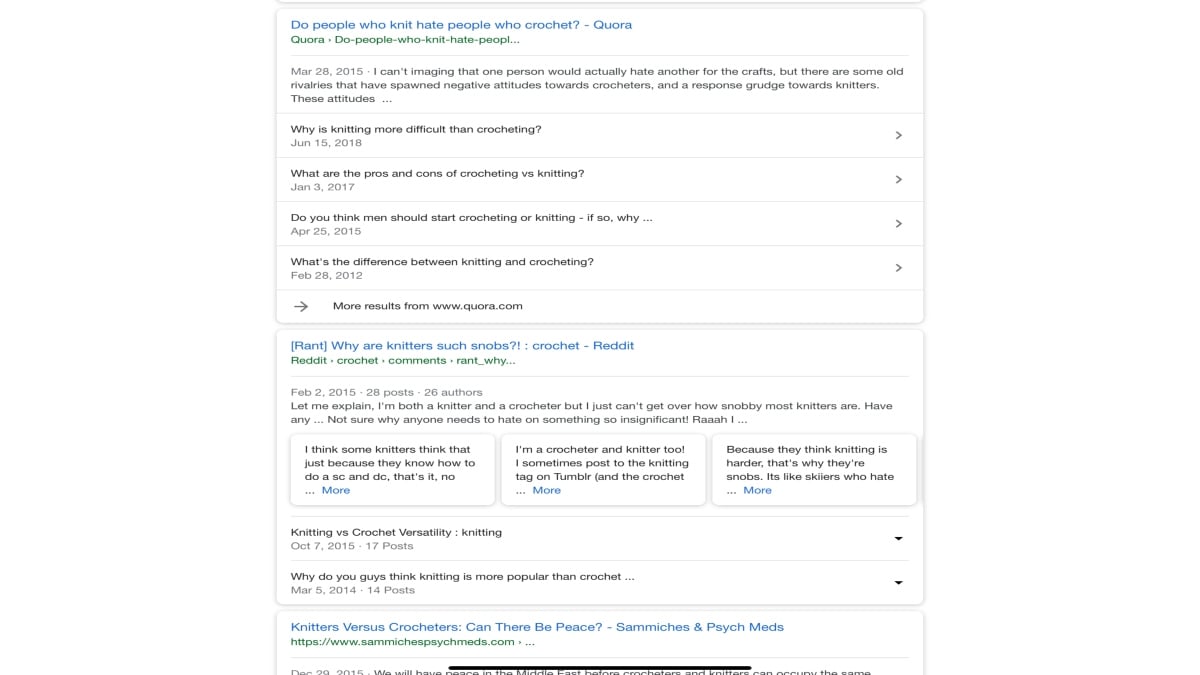 So, you get the point. Knitters (and a lot of other fiber art categories) look down on crochet. Whether it’s because it’s faster or looks different or was fashionable in the 1970s? Who knows. I’m sure you could look that up if you really wanted. All that matters is there’s a general perception that crochet is a “less than” fiber art to many people.

Bringing in the fiber community issues and the concept of relational meaning, Purl’s joke is intended to equate to the Bro joke. Thus, it sets up crocheters as analogous to “pricks” who drive BMWs. The joke is generally funny because it’s a play on words. The joke, however, has a socially relevant meaning when we look at the way that the fiber community treats crochet and place it within binary oppositional understanding that “weaving” is theoretically “better than” crochet within the fiber arts community.

Let’s talk quickly about microaggressions. In regular daily life, a lot of “jokes” often create a punchline based on a microaggression. A microaggression is basically when a person from a majority group says something based on a stereotype and ignores the fact that it impacts the marginalized group. For example, as a woman, I might hear, “wow, I don’t know how you manage to work and have a kid!” Yet, that’s not something my Husbeast hears. So, even though it’s not meant as rude, it’s kinda rude because it makes an assumption based on my gender.

The crochet joke does an awesome job, if you understand the fiber community metaphor, of presenting a microaggression in a really non-insulting way. For example, most crocheters aren’t going to feel totally socially upset by the joke. It’s cute on its own. However, as a generally “othered” group in fiber, the joke’s punchline clearly doesn’t say “because he doesn’t know how to KNIT!” So, it brings up the majority/marginalized microaggression concept in an unoffensive, adorable way.

What it means when Purl knits herself

Trying to fit in, Purl realizes that she can change herself by “making herself over.” She takes her knitting needles, knits herself up, and makes a little suit for herself. However, she physically changes from a yarn ball into this:

Now, that doesn’t seem to mean much, until you look at this:

In late 2016 and early 2017, the fiber community became a political focus during the Women’s March as we all knit or crocheted or whatevered a bunch of pink “Pussy Hats.” The short story (although you can read more here) is that cold weather for the Women’s March meant women needed hats. The design intended to allow women to use craft (sewing, knitting, and crochet patterns are available) to create a visual. The pink represented femininity. The name was a nod to some sexist comments made and reported in the news.

Even though Purl recreates herself as masculinized, the Pussy Hat imagery allows her to retain a sense of “feminity.” However, to be both feminine and masculine, to walk the fine line between the two, she takes on a problematic personality and identity.

The Pussy Hats, while empowering to many, were also problematic by not representing transgender (the term “pussy”) and women of color (there’s a whole argument about fiber arts and socio-economic privilege). For a long-form read on this, head on over here.

Thus, while she adopts aggressive masculine traits, she also does so within the white, cis, hetero Pussy Hat feminine identity that deviates from her personality.

Why it matters that Purl “frogged” herself

Keeping all of the above in mind, Purl’s choice to frog her “new” self and start over is pretty much awesome. Any fiber community members know that to “frog” is to “rip it rip it rip it.” (Get it”? “Rip it” sounds like “ribbit,” hence frog.) When we’re making projects, sometimes we realize way at the end, nearly finished, that we made a mistake at the beginning. Can we live with the mistake or do we feel that it’s so abhorrent that we need to just start all over? If you really feel that you’re going to focus on that mistake and hate the final object, then you might just decide to start over, despite all that hard work.

When she originally meets Lacey, she pauses and thinks about ignoring her. Still, in Pussy Hat form, she’s not sure what to do. In many ways, this is similar to the exclusive white, cis, hetero feminism that often overlooks the struggles of marginalized groups within its potential community.

Purl, however, chooses to bring Lacey into the group. She puts her current status at risk to raise up someone else. Someone that does not look like her, a yellow rather than pink yarn ball. This is intersectional feminism.  This is also why it matters that Purl frogs her knitted self and reverts to her pink yarn ball self. She chooses to reject the mainstream notion of feminine and feminism. She rejects a problematic version of feminism and becomes a steward for inclusion. She basically finds an error in the pattern and decides she can’t live with it, despite all the work.

A “work in progress” is a project that a fiber person is still working on. Sometimes, we have WIPS that we put in “time out,” and sometimes we have so many we don’t know what to work on. Sometimes, we realize we need to unknit a row to fix a mistake (“tink” in fiber slang which is knit spelled backward). Sometimes, we just need to frog the whole thing and start over.

I think that basically, we’re all WIPs. It’s how we choose to accept or reject our mistakes that really matters. And maybe, there are just some things in life that we really need to frog.

Behind the Scenes at a Luthier’s Shop 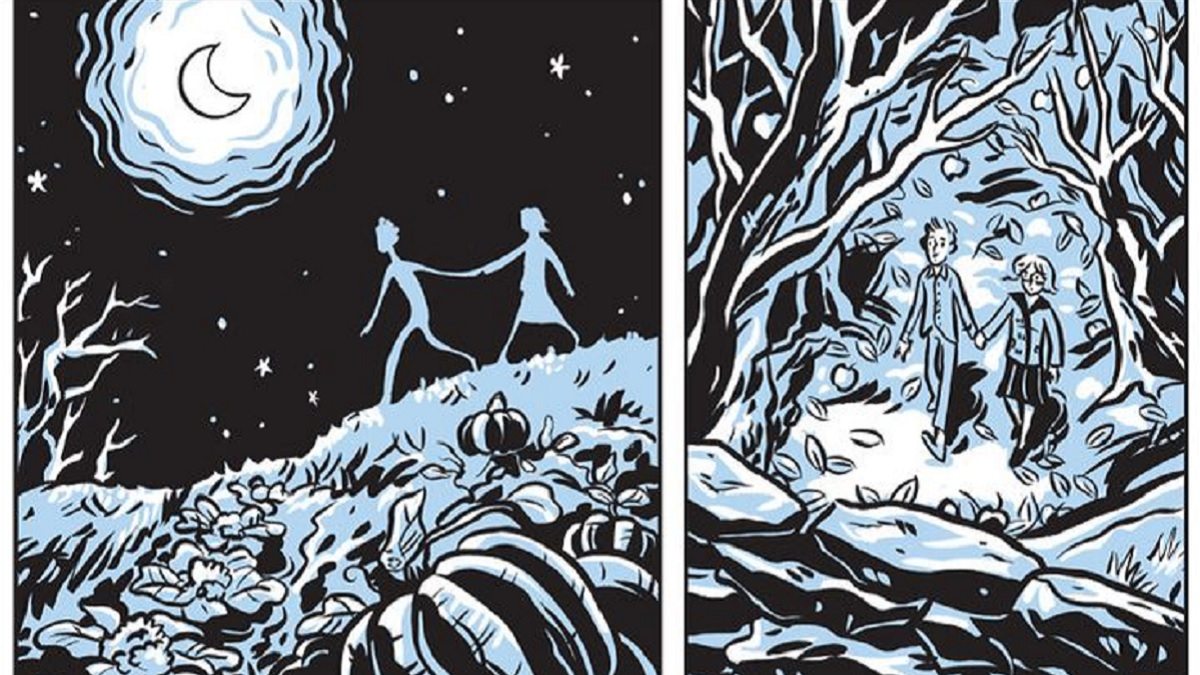 My First OTP, Meg and Calvin: ‘A Wrinkle In Time’ Valentine’s Day Edition