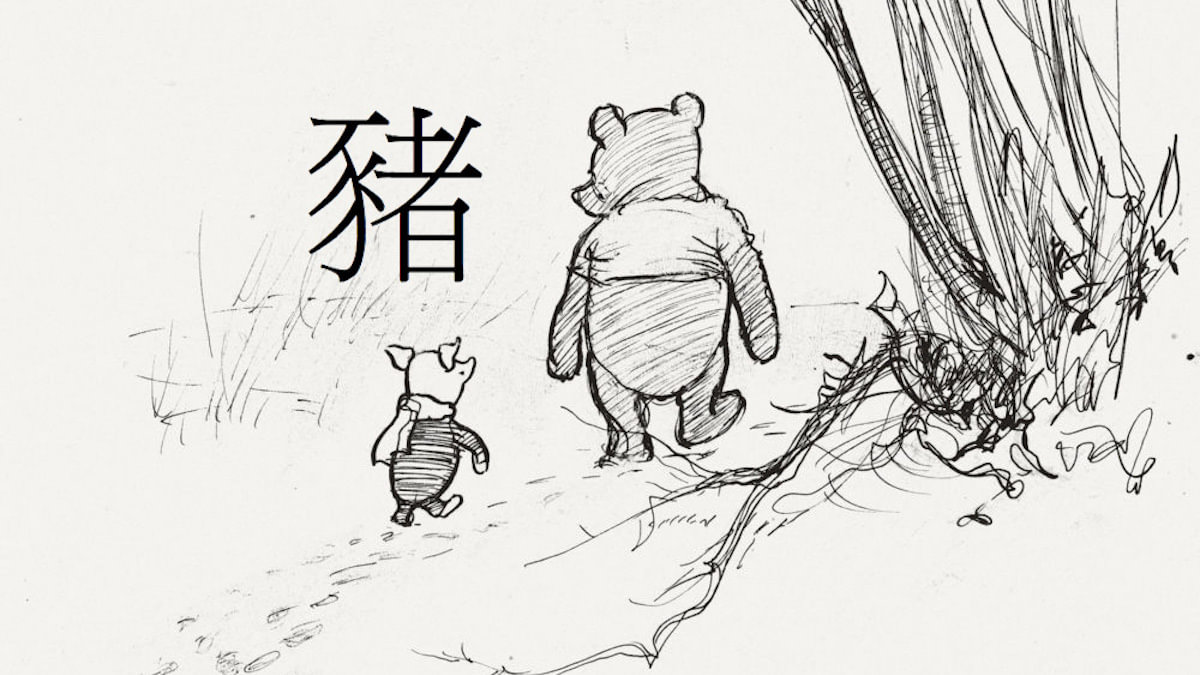 It’s the Year of the Pig!

The Pig is the twelfth and last animal in the zodiac cycle, and according to the myth, was given this placement because he overslept when it was time for the Jade Emperor to decide the order in which the animals would be represented.

There are other legends that say Pig (Zhū) was last because his house was destroyed by a wolf, and couldn’t make it to the emperor’s until he rebuilt it. It seems pigs have always had trouble with wolves.

Although people often use the phrase “pig” to address someone’s overindulging in something, sites such as Chinese New Year say pigs have a “beautiful personality and are blessed with good fortune in life.” They aren’t the symbol of gluttony, but of wealth in the Chinese culture.

The Force is strong with many famous pigs, including actors Donald Glover, Ewan McGregor, Adam Driver, and even David Tennant, all who have made their mark on in the Star Wars universe.

In celebration of 2019, here are 20 geeky facts about pop culture piggies:

1. Pigs have been a prominent part of more than one Doctor Who story, as the Tenth Doctor encountered the Daleks’ Cult of Skaro kidnapping humans for experiments using half-human Pig Slaves. This two-part series set in New York was inspired partly by classic novels such as Frankenstein and The Island of Doctor Moreau.

2. The Ninth Doctor’s piggy encounter was when the criminal alien Slitheen family faked a spaceship crash landing in the Thames. The Doctor’s suspicions the craft was fake were confirmed when the pilot turned out to be genetically modified Earth pig.

3. In 2018, Tenth Doctor David Tennant (who we now know is a “pig” himself) and Fifth Doctor Peter Davidson did a Doctor Who/Pigs in Space crossover skit with The Muppets when they played at London’s O2 Arena.

4. Speaking of Muppets, Miss Piggy’s full name is Pigathia Lee, as was mentioned in two Muppet episodes. The name, derived from the Greek “Piganthius,” means “River of Passion.” This passionate pig made her first appearance on a Herb Alpert special in 1974 prior to the premiere of The Muppet Show. She has since been featured on the cover of several magazines and made worldwide guest appearances on everything from Project Runway to WWE Raw.

5. One of Batman’s most disturbing foes, the insane Professor Pyg (created by Grant Morrison and Andy Kubert), is often seen wearing the mask made of a real pig’s head. Appropriately enough, he made his first appearance in Batman issue #666 in 2007, the last Year of the Pig before this year.

6. The 1995 movie Babe, based on Dick King-Smith’s novel The Sheep-Pig about an orphaned pig who with dreams of becoming a sheepdog, was nominated for seven Academy Awards, including Best Picture. It also won the Golden Globe for Best Picture-Musical or Comedy and was #80 on the 2006 American Film Institutes list of America’s Most Inspiring Movies.

7. Author E.B. White’s 1952 Newbery-winning classic Charlotte’s Web based its unlikely hero, the runt pig Wilbur, on a real-life pig. White was a farmer himself who did raise pigs for food. When one of his pigs got sick, he became attached to it trying to nurse back to health. Sadly, the pig died, and White was so surprised how much it affected him, he wrote an essay, “Death of A Pig,” even before working on what would become Charlotte’s Web.

8. The human name of the title character in the Studio Ghibli anime film Porco Russo, about a former 1930s World War I flying ace who was mysteriously turned into a pig during the war, was Marco Pagot after a real-life pilot that director Hayao Miyazaki had worked with in the past. The actual character was possibly based on another real-life Navy fighter pilot, Charles Hammann.

9. British kids show star Peppa Pig, which airs on Nick Jr. in the United States, has some American parents worried, according to one British publication the Daily Star. The publication reported some American kids who binge on the show were developing a “posh English accent” and others even started snorting at the end of each sentence.

10. Is Looney Toons‘ Porky Pig married to his longtime girlfriend Petunia? Well, it depends. In the 1937 “Porky’s Romance,” he only gets married in his nightmare, and in 1939’s “Naughty Neighbors,” a family feud busts up Porky and Petunia’s wedding plans. By the 1960s, Bugs comments one time that Porky has “got a wife and six piglets at home,” so it may have eventually worked out after all.

11. There is quite the variety of famous pigs in the world of gaming. These range from the adorable the cute little egg-crazy Bad Piggies from Angry Birds to the more unsettling Ganon from Legend of Zelda and Duke Nukem’s mutated Pig Cops.

12. The fable of the Three Little Pigs dates back to at least the 1800s, with the Depression-era Disney animated version one of the most well-known interpretations. This tale has been often parodied as well. The 1942 Merrie Melodies “Pigs in a Polka” by Friz Freleng parodies the Disney version, the bestselling children’s book The True Story of the 3 Little Pigs lets the Wolf take over the narrative, and metal band Green Jellö (aka Green Jellÿ) did a claymation music video on the tale in which Rambo comes and helps the pigs take out the Big Bad Wolf.

13. Pink Floyd fans know well the inflatable flying pig appearing at most of their concerts. The original 40-foot inflatable pig (supposedly named Algie) was designed for the now iconic Animals album cover in which it flies over the Battersea Power Station. During the shooting, it broke free when a gust of wind hit it. It was later spotted by pilots around 30,000 feet in the air and even flew in the path of aircraft causing flights to be canceled at Heathrow. It made its way over the English Channel before finally landing in a farm in Kent.

15. Winnie the Pooh’s ever faithful friend Piglet, although one of A.A. Milne’s original creations, wasn’t included in the first 1966 Disney film Winnie the Pooh and the Honey Tree. He was replaced by a gopher the studio thought would be more lovable. Book lovers protested this decision, and Disney brought Piglet back on the next film, Winnie the Pooh and the Blustery Day in 1968. He may be a “very small animal,” but he has a big heart.

16. In Lewis Carroll’s Alice’s Adventures in Wonderland, The Duchess gives Alice her baby to look after. The baby is constantly sneezing and yelling from the pepper in the house, but when Alice takes it outside, it turns into a pig, which Alice lets “toddle off” before continuing her adventure. Guesses from literary critics to what this means often include the baby is proof of Carroll’s dislike of little boys who are better off as pigs, or it was some nonsensical look at reverse evolution.

17. There are many countless fan theories floating around on the internet. One associated with Disney’s Moana is why her pig, Pua, didn’t get to go on the voyage with her, even though the movie posters show it on the boat. The pop culture site Medium gave several answers to this including Pua was only an imaginary friend to begin with, that the pig was actually Maui in disguise, and that Moana ate him early on. She did like pork.

18. The pig-like Gamorean species, first seen guarding Jabba the Hutt’s barge in Star Wars Episode VI: Return of the Jedi, is a matriarchal clan, according to Wookieepedia. The most powerful sow, the Clan Matron, is married to the Clan Warlord boar, who served as the General of the Clan army.

19. Author Ian Falcolner created his popular Olivia as a “little present” for his niece, but several other kids fell in love with her. Since its creation in 2000, it has won several awards including a Caldecott honor, and has been translated into at least 15 languages.

20. Everyone knows that a guinea pig is a “pet, not a pig,” as a member of the species of rodent, Caviidae. This confusing nomenclature was the point of controversy in the illustrated short story Pigs Is Pigs, written in 1905 by Ellis Parker Butler. In the story, a railway agent refuses to accept the pet rate for handing over a shipment of two “pigs” to a customer. While the railway office bosses bicker about this point, Flannery hangs onto these pigs that soon reproduce with overwhelming enthusiasm, causing the station to overflow with fuzzy pigs. This story helped inspire Robert A. Heinlein’s Martian flat cats and Star Trek’s tribbles and was made into a Disney cartoon in 1954.

Pigs in fiction may be villainous and vile or cute and cuddly, but they will always make for interesting characters.

Pigs is pigs, you know.

The Importance of Story Time