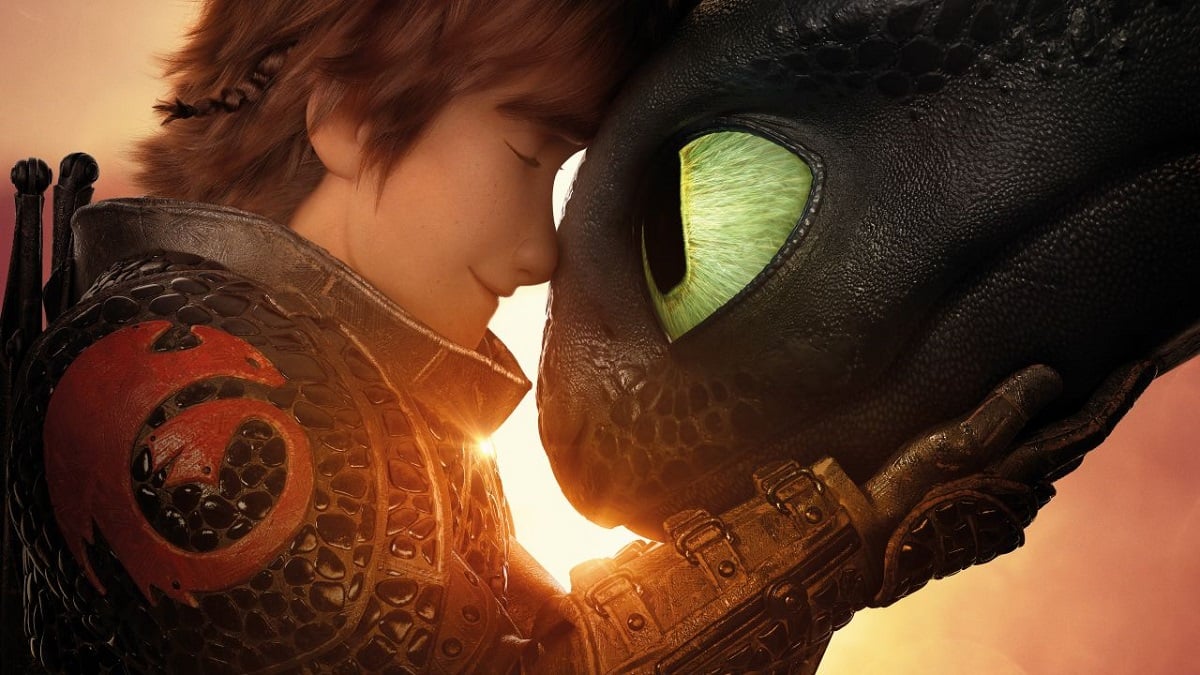 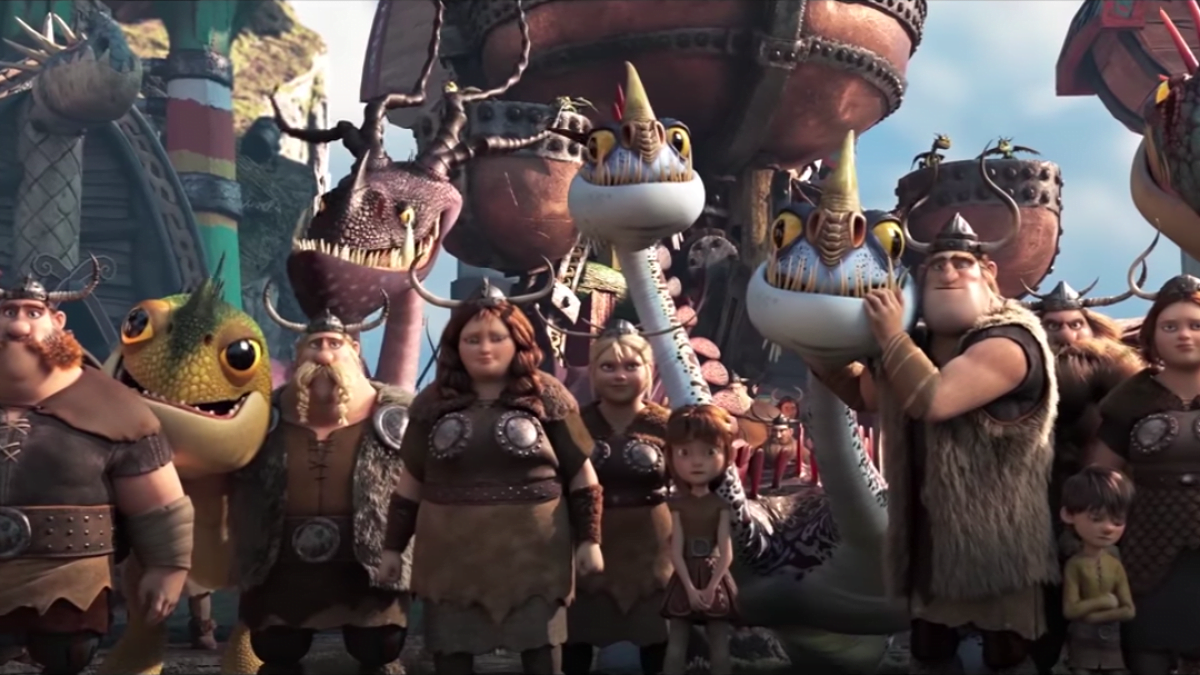 The deal was: whoever sits next to me in the movie has to bring the tissues. As a family, we have all seen How to Train Your Dragon 1 and 2. And I cried in both. Horribly. Big fat ugly crying tears. So we knew what we were doing and we had a contingency plan. We were going to see How to Train Your Dragon 3: The Hidden World… And then the kids would pretend like they don’t know the blubbering mess they usually call Mom.

Good news is: I wasn’t a blubbering mess. In fact, the movie was even better than that. It was brilliant.

Yes. Do you like dragons? Dragons with personalities a lot like humans? And I swear, the personalities are what make the film. How to Train Your Dragon 3 is a movie with personality–along with action and fantastic animation. It is a really enjoyable film. Plenty to relate to, continuity is kept at a high standard, and the dialogue is witty without purposely dividing adults from kids. I still chuckle at Fishlegs and his baby-dragon carrier.

Yes. The characters are funny and relatable. The jokes are light-hearted and the action is consistent. There are plenty of jokes, both verbal and visual, so even the emotionally-heavy scenes aren’t weighed down too much.

3. When is a good time for a bathroom break?

I confirmed with my kids: Never. They loved the whole film and really enjoyed every minute. They even made the effort of checking for “sneaky pee” before the film just in case.

However, if you really need to leave during the film, there is a short break when the villagers of Berk are flying to a new island. You have about 3 minutes to do your thing and come back. It’s about halfway through, starting at the whole village flying and ending at Hiccup taking off Toothless’s harness. 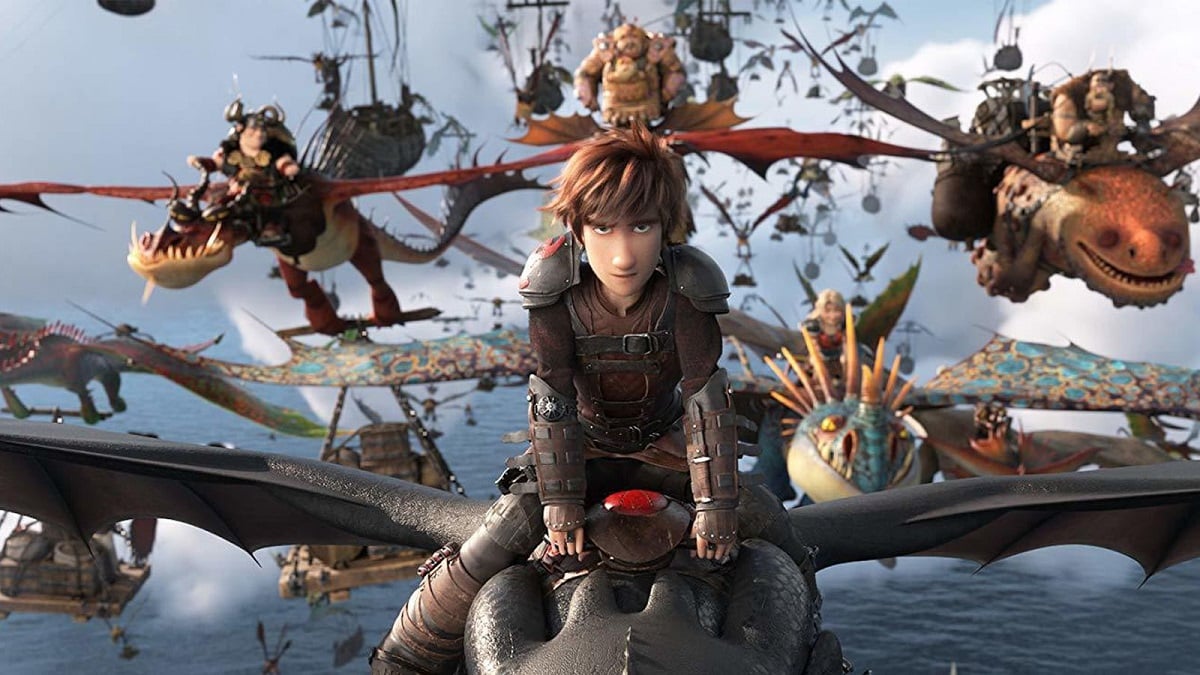 4. Is the rating appropriate?

How to Train Your Dragon 3 is PG-rated and aimed at the kids (big kids included). It is definitely appropriate. I watched it with a 5-year-old, a 9-year-old, a 12-year-old, and a 42-year-old. The youngest cried because she hates goodbyes. She cries if she doesn’t say a proper goodbye to Dad leaving for work in the morning. She was also fine after she left the cinema theatre.

There are a few mild rude jokes and Ruffnut (the girl twin) does a bit of slight sexual innuendo but generally speaking the movie is very child-friendly and definitely suitable for its target audience.

Dragons. Just lots of dragons. And their riders; most of them doing stupid stuff.

Well, it’s actually about Hiccup, a viking who happens to be best friends with a dragon named Toothless. Without giving too much away from previous movies, How to Train Your Dragon 3 is essentially a “moving out of home” story. Hiccup and his friends are all about protecting their dragons. They have a pretty good (if haphazard) system for rescuing dragons and bringing them home. Yes, they have turned the village of Berk into a shelter for dragons.

Unfortunately this has also made Berk a target for dragon-hunters and thus they need to look for a new home. The focus is on protecting the dragons, especially Toothless since he is a Night-Fury, the ultimate prize for dragon-hunters. The distraction is the introduction of a new dragon, a mate for Toothless.

Now, the movie-makers could have gone down the path of every standard love-story but this is more of a coming-of-age story for Toothless … and yes, for Hiccup too.

This movie is about trust and love and protecting those you care about. It is about allowing you to see all the characters grow and make the decisions we can relate to in real life (except for the flying squirrel suits; I don’t have one of those yet). The threat of dragon-hunters keeps the action and suspense up, while the emotional dilemmas keep the story line moving along.

6. Do I need to have read the book to enjoy it?

Honestly, you may be better off not reading them. It has been quite a consternation amongst the fans of the books because the movies are WAY different from the books. Personally, I can accept the differences and consider the movies to be “an alternative” or “inspired by.”

The only common feature between the books and movies is David Tennant, the international geek treasure that he is. Tennant reads the audiobooks for the series AND he is the voice of minor role Spitelout Jorgenson (father of Snotlout, a supporting character). I didn’t see his name in the credits for this movie but I don’t care. He is the force that brings the books and movies together.

7. Do I need to have seen the previous movies in the series to enjoy it?

It’s a trilogy so there is going to be continuity and ‘in-jokes’ throughout the film. However, I honestly think you could watch this film without seeing the first stuff. You may wonder why there are dragons and who decided if they are good or bad. There is also a basic assumption to accept the strong relationship between the Riders of Berk and their dragons. All of these things won’t ruin the film for you but knowing them will enhance it.

You also don’t have to watch the previous films (and tv series) immediately before watching this film. Unlike Incredibles 2, this movie does not take off exactly at the end of the previous film. In fact, How to Train Your Dragon 3 offers a nice balance of sentimental memories without becoming too “talky-talky” on the backstory.

In short, you could see How to Train Your Dragon 3 without seeing 1 and 2… but why would you? They are just as good as this one!

Gorgeous. Absolutely gorgeous. There is one scene with sand and I completely geeked out. I know, I know…it’s sand. But it was SAND!! And it was glorious!! I still remember the first time I reacted to the detail of Shrek’s hair and THE SAND was even better.

Generally speaking, though, the animation is still top-notch in this movie. The characters have aged and the environment is appropriately weathered to make it feel like it fits in the timeline. To be honest, the sand was the only time I geeked out. The animation perfectly sits in the realm of “spectacular without being too distracting.”

My kids have played the theme music in the school band, which in itself comes with pros and cons. Pros for them because they feel an emotional connection with the music and can be carried away in just the right manner for the movie. Cons for me because I have heard the music in all its elementary school glory (Okay, they’re not that bad). And yes, the music is still very fitting for the movie. It’s all about pace and crescendos, so you really feel the sense of flight with the dragons.

The artwork within the credits is worth staying for but there is nothing at the end of the credits.

There are a number of scenes where I’m pretty sure it may have been worth it, however we saw this in the regular cinema. We are a family of five and that is not a cheap date at the movies in any country. If I was really into movie experiences and had a bit more cash, I think the 3D may be worth it. Think of it as one last fly amongst the clouds and you will then understand the temptation to fork out for the 3D glasses.

Well, I did. Not as much as I thought I would but there are just enough sentimental touches to think about the previous storyline, and just enough set-up to think about where the movie is going. No spoilers but the ending is perfect. Absolutely perfect. I did wipe away a tear for this perfection but I am happy to say the kids did not shun me as we walked out of the theatre. There is hope yet.

Opening dates vary greatly around the world. How to Train Your Dragon 3 has already opened in Australia. Official opening date in the USA is February 22, however, we have reports of advance screenings starting February 1 so check with your local cinema for more details. The last country to see this movie will be Belgium in June 2019. It may be worth travelling to France on February 6.