As any Marvel fan knows Marvel Knights is an imprint of Marvel Comics that originated in 1998. This series contained standalone material taking place inside the Marvel Universe, usually on Earth-616. The creative team for Marvel Knights imprint was hired by Event Comics, a company owned by Joe Quesada, and Jimmy Palmiotti’s. Joe Quesada became the editor-in-chief of Marvel in 2000 and later named chief creative officer in 2010. At the time of his retirement, he was the longest-serving Marvel editor-in-chief other than Stan Lee.

On Wednesday, Nov 7th, 2018, Marvel released the first issue in a new Marvel Knights series Marvel Knights 20th #1, which starts a six-issue series. There’s an all new creative team behind what Marvel promises will be a “a groundbreaking story across the Marvel Universe” in this limited series so let’s take a look at what we got in this issue and where this story looks to be going. 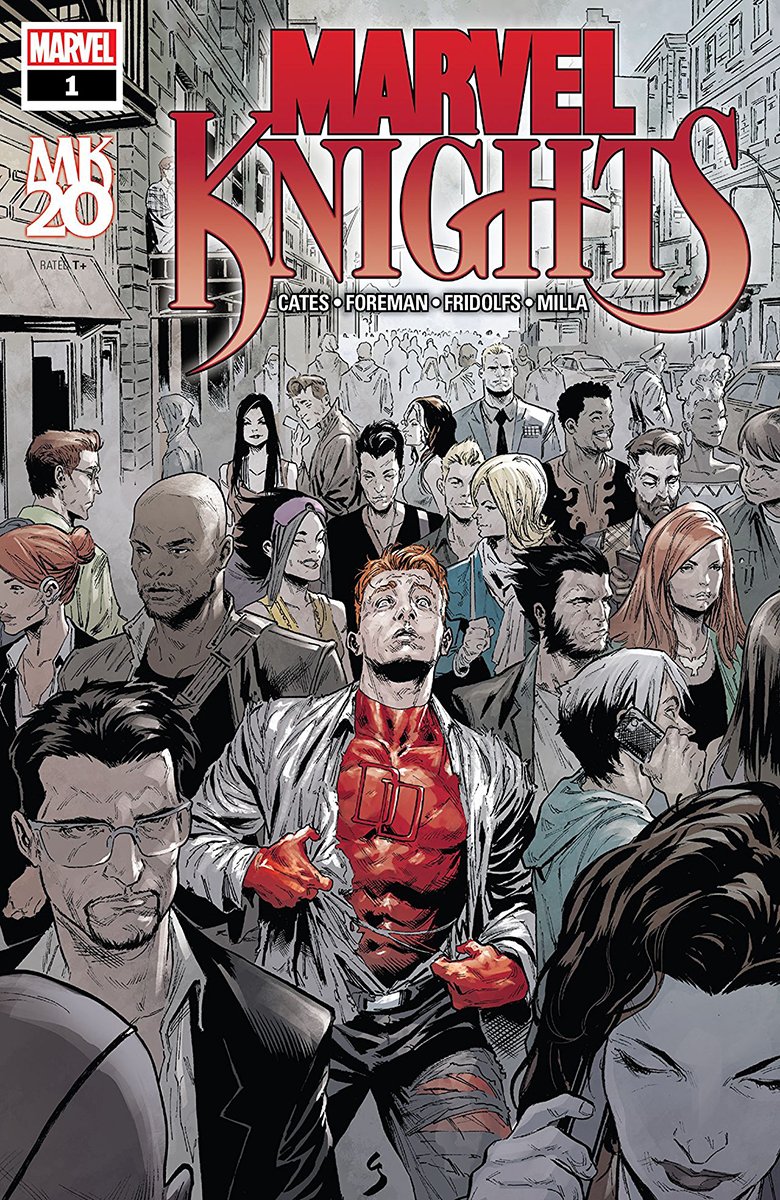 WARNING: From here down there may be spoilers for anyone who has not already read the Marvel Knights: 20th #1 issue.

On a rainy night, in a dark cemetery a cop approaches the crumbled form a of a blind man weeping before a grave stone. This isn’t just any cop. This is officer Frank Castle, the man know as The Punisher. That pathetic bundle of tears and confusion on the grass – that’s Matt Murdock, you know, Daredevil… unfortunately, he doesn’t know it. Welcome to the start of Marvel Knights 20th #1.

Cates and Foreman pick-up the mantle of Marvel Knights and hit the ground running. The last time we saw a Marvel Knight title was 2013, so I was excited to see it return and this new team didn’t disappoint us with Marvel Knights 20th #1. If the rest of the series is this strong then I’ll be ecstatic.

Marvel Knights 20th #1 opens with Frank Castle trying to remind Matt Murdock that he is Daredevil. As any fan of either hero knows, he and The Punisher haven’t had the best of relationships so it’s no surprise that Murdock doesn’t trust him. Once Murdock remembers who he is and who Castle is things get tense. Unfortunately, Frank fails to explain that just because Murdock remembers who he is it doesn’t mean the rest of the world does. Angry and confused, Murdock isn’t willing to trust Castle nor the “twitchy little nerd” sitting in the back of the cop car, even when Castle tells him that this man is the guy “who knows the guy who knows everything.”

Unconvinced, Murdock heads to his office to speak with Foggy, only to find that his best friend doesn’t recognize him. The firm is still owned by Nelson but his partner is now an incredibly familiar female lawyer. She does what any woman does when they encounter a dripping wet, crazy man who just came through the office window. I can’t really blame her for calling the police, man-handling him, and not taking the time to hear him out. Still, Murdock tries to hand her his card only to discover that to everyone except him it’s completely blank.

His stalker is a man closely linked to the Daredevil but like Murdock, the stalker has no clue of his own identity as well. Readers will know him instantly from his scar. They’ll also recognize the prominent politician that hired the stalker. This man obviously knows something about what is happening because after dismissing the stalker, he grovels before his masters asking: “Why do we not just make them forget again? Why not use the machine to—“

Cates has done a good job roping us in with this first issue. There is so much going on here and I am dying to know who’s behind this, how many of our favorite heroes and villains are affected, and what happened to make and entire world forget them. Cates dumped a thousand-piece puzzle out in front of the readers and is putting pieces together slowly. We get to examine it piece by piece and it’s better than Easter eggs in the MCU movies. Each time we recognize something it’s exciting. I can’t want to see what the full picture is but the tension, the intrigue – Cates nailed it.

Foreman’s art is excellent. Foggy’s face as he looks at the blank card is a perfect mix of confused, and scared. The muted tones and shadows in the cemetery really add to the immersion and yet, when Murdock is standing in the brightly lit law firm, Foreman renders a perfect mix of brightly lit and yet cold, unfamiliar surroundings.

Castle to Murdock “I’m sorry I had to hit you like that …old habits, I guess.”

The next issue is scheduled for November 21, 2018 so it looks like we’ll get a dose of awesome every two weeks if they keep the quality as it is currently.

Good Constellations to You!

A GeekMom Award for Jasper Fforde!