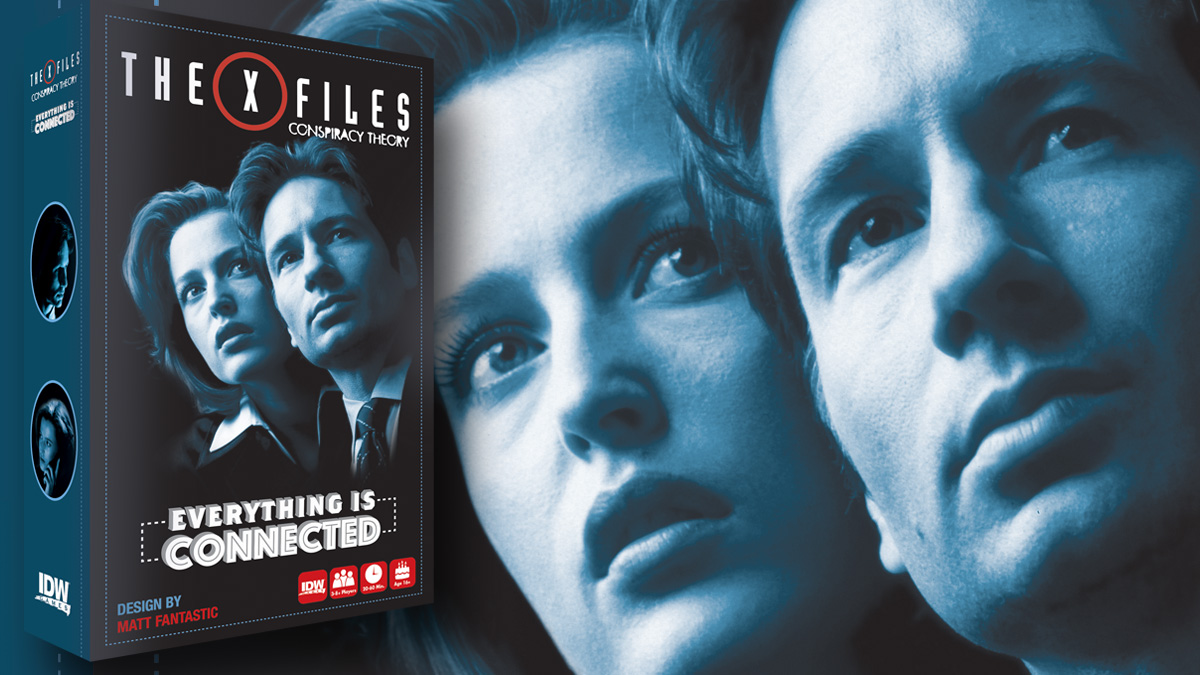 What Is The X-Files: Conspiracy Theory?

The X-Files: Conspiracy Theory is a party-style card game in which you play as Special Agent Fox Mulder, spinning together one of his trademark out-of-the-box explanations for his odd cases to his superiors at the FBI. The game is part of IDW’s Everything Is Connected series which so far also includes Dirk Gently’s Holistic Detective Agency.

How Do You Play The X-Files: Conspiracy Theory?

In The X-Files: Conspiracy Theory, the active player acts as Fox Mulder while the other players take on the role of his FBI superiors at a tribunal. Mulder must weave together the evidence in hand to create an elaborate conspiracy, while also earning the respect of those sitting in his tribunal, and his superiors must try to vote with the room if they want to keep their reputations secure.

To begin, separate the Evidence and Conspiracy cards, shuffling both decks and placing them face down on the table. Each player takes three Evidence cards from the draw pile to form their opening hand.

The game has twice as many rounds are there are players, meaning that each player takes on the role of Agent Mulder twice. Should any players not wish to play as Mulder, they can skip over that part of the game and only play on the tribunal, however, this will exclude them for winning.

To begin a round, the person playing as Mulder draws a card from the Conspiracy deck and reads it aloud before placing it face up on the table so all players can see it. The other players then each select an Evidence card from their hand and place it face up on the table beside the Conspiracy card. This creates the evidence that Mulder must weave together into his story. From this point, the tribunal players cannot discuss any element of the conspiracy with one another, nor how they will vote.

Mulder then considers the evidence and begins to explain the conspiracy he has uncovered to his superiors. Naturally, this part of the game becomes harder the more players there are because Mulder must make sure to include each piece of evidence he has been handed by each tribunal member, meaning that he can have anything from two to over seven pieces of evidence to weave together.

After Mulder has finished telling his story, the tribunal members then vote as to whether they believe him or not. This is done by each member simultaneously holding out a fist, counting to three, and revealing either a thumbs up to believe or a thumbs down to disbelieve.

After voting has concluded, tribunal members may discard an Evidence card and then must draw back up to a hand of three. The role of Mulder then passes to the left and a new round begins.

The X-Files: Conspiracy Theory also includes rules for a variant game based on the classic X-Files episode, “Jose Chung’s ‘From Outer Space'”. Anyone who remembers that particular episode will no doubt recall that it is easily one of the most utterly insane hours of television ever to hit screens as multiple witnesses to a bizarre event recount their versions of “The Truth” to a famous author who attempts to make some sense of it. There’s an odd scene involving sweet potato pie, a chain-smoking “alien,” another alien named Lord Kinboat, and Alex Trebek.

In the Jose Chung game variant, players act as witnesses to something unbelievable while a final player acts as Chung. Each witness reveals two Evidence Cards and tells their version of what they witnessed and how they believe it relates to the overall conspiracy—the witnesses stories do not have to connect to any other witness’s story. Once all the witnesses have told their stories, the player acting as Chung must connect them together into a vaguely cohesive narrative. This variant is recommended for “advanced storytellers” only.

Should You Play The X-Files: Conspiracy Theory?

There have been a number of X-Files tabletop games over the years, and I will say that this is one of the best. The game does a great job at making you a part of the X-Files universe. Storytelling is inherent to The X-Files with nearly every episode somehow relating to Mulder telling someone a crazy-sounding story and attempting to get them to believe him, so creating a game with storytelling at its core is a perfect fit for the show.

The cards have also been created by someone with an obvious love and knowledge of the show. While the Conspiracy cards have unique concepts on them—repeating ideas from episodes here would make it too easy just to retell an existing story—the Evidence cards are filled with little references that fans will spot. While many are obvious things or people that even the most casual fan will know (The Cigarette Smoking Man, The Lone Gunmen, and the “I Want to Believe” poster for example), there are also many more obscure references including Zeus Storage, the Stupendous Yappi, and Dr. Fingers.

The Evidence cards also do a great job of including a mixture of ideas and items from various conspiracy theories from throughout the decades. Those well-versed in conspiracy culture will spot many commonly repeated names and themes like MKUltra, Chemtrails, Lee Harvey Oswald, and Alex Jones alongside fun additions like Mashed Potato Sculpture, The Illuminati, and Unmarked Helicopters. Finally, there are a lot of basic and humorous cards included to help build up your stories, such as Overly Attractive Veterinarian, VHS Copy of WrestleMania III, Time Travel, and 3 Gallons of Generic Grape Soda. Between all these 180 cards there is unlimited scope for telling X-Files tales, and you would be able to play millions of unique games.

There are, of course, downsides. For me, the most glaring of them all is that the game completely excludes 50% of its core cast—Special Agent Dana Scully. Although she appears on the lid, Scully is barely mentioned in the rules and doesn’t even get her own Evidence card despite far lesser characters like Tad O’Malley receiving one. While you could choose to play as Scully telling her version of events to the FBI (it did happen frequently on the show), the fact that the rules only ever refer to Mulder is a total blow. Mulder and Scully were equal, and to see her completely excluded from the game is unforgivable.

Secondly, I would have liked to see a better system than thumbs up/thumbs down for the tribunal players vote. Even a simple reversible card with I believe/I don’t believe that can be revealed would be better than the current system, and I intend to make my own at some point soon. And finally, I do wonder if by including some specific Evidence cards, the game designers are making light of series current affairs. At a time when the internet abounds with conspiracy theorists—a small percentage of whom take matters too far—is adding “The Russians” or “Alex Jones” to a party game really in the best taste?

If you can forgive the lack of half the X-Files team, this is a fun game for fans to play together, and one of the best official X-Files games since the old VHS Trivia Game back in 1997. While not the greatest choice for introverts and quieter gamers due to the sheer amount of talking out loud and thinking on your feet required, this will go down a storm with anyone who loved the show, and those who think there was more to the assassination of JFK than the public has been told.

Note:  While I note that the designer of this game was allegedly involved in an incident at Gen Con 2018, I have chosen to focus solely on the content of the game in this review and advise anyone interested to conduct their own research into the incident in question.

Luke, I Am Your Father

The Cliffs of Insanity: 5 Superhero Plots That Need to Staked Through the Heart