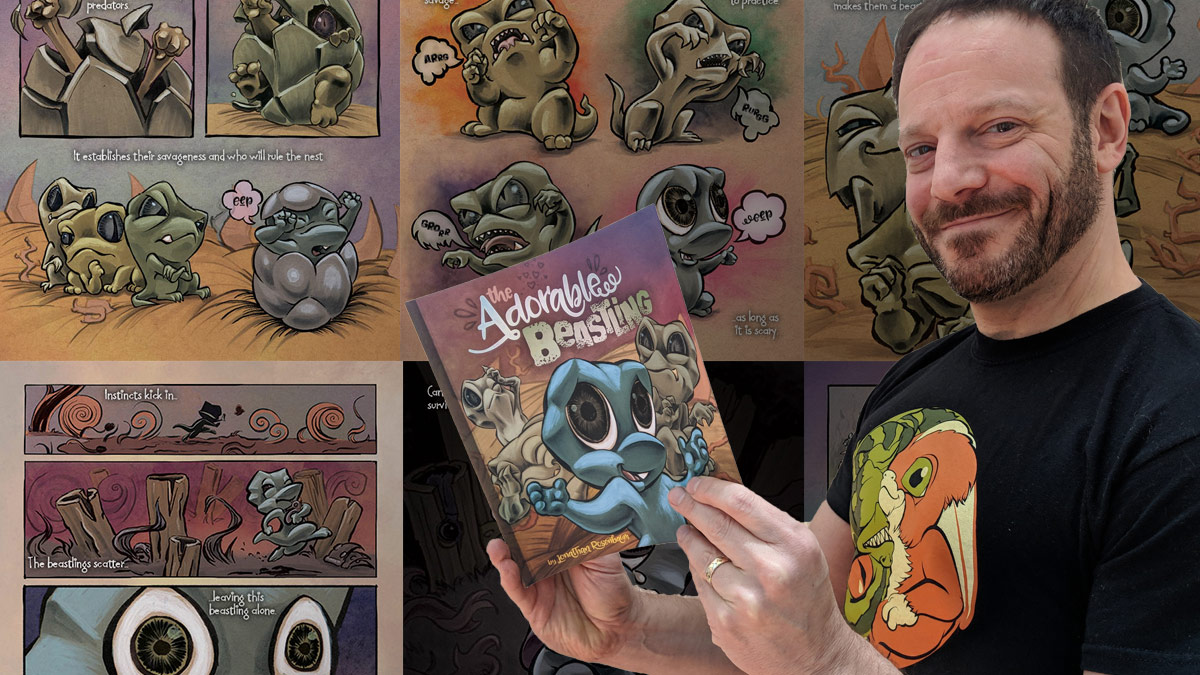 There are few things in life as enduring as stories, especially Fairy Tales and Fables. Fables are particularly enduring because they are stories with a purpose intended not just for children but for grown-ups as well. Fables are passed down from generation to generation, evolving as they go. Each offers the reader a moral lesson taught in an engaging and gentle way, using characters that are generally non-human. Today’s featured artist, Jonathan Rosenbaum, has developed his own twist on the latter of these and in doing so is creating rich new stories.

I came across the MajaNation booth at MegaCon in Orlando and instantly fell in love with the way his art combined elements of horror, fun, and whimsy. There’s a special talent to pulling this mixture off without having it look amateurish and Jonathan Rosenbaum clearly has a full tank of it. I was so struck by his art I even looked in to his t-shirts offered on TeePublic. That pretty much guaranteed I’d ask him to participate in Con Artists.

Jonathan already had a career but his passion was drawing.

I have always loved illustrating. I went to college for visual communications and had a career in multimedia/graphic/web design, but I still liked to draw. Around the year 2000 I became interested in children’s book illustration. I was involved with the SCBWI (Society of Children’s Book Writers and Illustrators). After many years of being involved one of my stories grew from a children’s book to more of a graphic novel. This got me back into comics again. I started hanging out with a local sketch group, and then started doing some local conventions. I kept illustrating on the side and even did children’s book with my wife based off of The Tortoise and the Hare, but with a Zombie and a Vampire.

That book was TheZomB and The VampR. The first of what would become a series based on well known fables. Jonathan calls them Nocturnal Fables. I personally love that moniker and intend to buy every one that he produces. The ZomB and The VampR is a charming tale of a Vampire’s ego and a Zombie’s determination mirroring The Tortoise and the Hare but with some fun updates like the Vampire’s desire to post about the race on all of his favorite vampire social networks. The Adorable Beastling is the next of the Nocturnal Fables and it is beyond cute. In fact, that is precisely the problem the poor little Beastling faces. Jonathan explained the origin of this fable to us.

I wanted to stay with the fable concept (I call it “nocturnal fables”) and this time I did it alone. I based it off of The Ugly Duckling, but it’s in reverse kind of. Beastlings are mean and scare for food, but our main character is different (not really a beastling), and she is cute and sweet.

Tell me a bit about The Adorable Beastling. Where can people get it? What is it about? What was the inspiration for such a cute creature? Is it an ongoing comic or a one shot?

This was a kind of follow up to The ZomB and the VampR. Based off of The Ugly Duckling. I wanted to visually write the story as a spin off of the Ugly Duckling. But I wanted the words/narration to be like a nature show. Initially I had her friends as a turtle a rabbit and a unicorn. But then I figured I created the Beastling, so why not push it? From there I made a Centacorn (centaur + unicorn), a Rabbeaver (rabbit + beaver), a 2turle (2 headed, 2 tailed, 6 legged turtle), and a Birderfly (butterfly + bird). I also created plant life to relate with kids, such as burger berries, doggie willows, and pizza plants. I had fun creating this world.

I really wanted to see an illustrated series with these ideas brought to life. I’m particularly curious at to how the centaur / unicorn would manifest and what intriguing fables could be told with such a creature. So what is coming next in the Nocturnal Fables series? Jonathan let us in on that as well:

I am stewing up a new story now.  Not too far into it.  Wanted to round off the nocturnal fables in threes. This may be (still planning) the idea of mixing classics. Three wolf stories.  The Boy Who Cried Wolf, Red Riding Hood and The Three Pigs. But instead of a boy, it’s a chicken and he gets cursed for lying and is turned into a werewolf.

I don’t know about you, but I can’t wait to see what this interesting mixed of stories becomes. Whatever it becomes you can bet it will be both amusing and modern. While I am stoked about the Nocturnal Fables, Jonathan does a lot more than children’s books. As I mentioned, it was his art that really drew me in at the convention. I hadn’t even learned of his fables at that point.

You mentioned going to school for multimedia/graphic/web design so you went to school for what sounds more like a form of digital art – how much (if any) drawing and illustration was involved?

When I went to school, computers were new. I did geek out on them, but I also had to take foundation drawing classes, life drawing, 2D, color etc. I also took some illustration courses, but my major was Visual Communications. I didn’t quite have enough to have a minor in illustration. I learned multimedia and web on the job.

That’s a lot of raw talent in terms of illustration but if you wander over to Jonathan’s Deviant Art account, you’ll see just how much talent this gentleman possesses. I had quite blast exploring his works.

You did a cool prose piece on Deviant Art about the secret life of socks – have you considered turning that in to an illustrated short or even a kid book?

I have a lot of ideas, thanks for reading that one. I even thought of making that a video. I feel insecure about my writing… need practice on that. I have so many ideas in my inventory, and new ones pop up all the time. I am trying to build my original content more so I don’t just do fan art.

That brings me full circle to the way we met. Fans, conventions, and all that jazz. Jonathan has one of the coolest conventions stories I’ve heard:

During Oak City Comicon 2016 I had a woman ask me to do a commission. It was to be of her dressed as Black Widow and her boyfriend as the Punisher and she would be proposing to him. Then when I completed it at the show, she brought him over to show him the picture I did and after he saw it, she proposed, right there in front of my table.

For those of you thinking what a cool idea this is or coming up with similar ideas – the answer is yes. Jonathan is definitely open to commissions. This includes tattoos or other graphic art:

I have a graphic design background and I know how to work with people, so when it’s something more than a picture, such as a logo or even a tattoo, I know more time needs to go into it.

Jonathan also shared a pretty solid lesson from his fans that he learned over time about his art and I think it’s one many artists can identify with:

What would you say was your best “fan moment”? I know the proposal thing is pretty hard to top but you have some really unique and fun art.

I can’t think of a specific fan moment. I’m always blown away when they come back, or mention stuff they see me post on line. The reactions I get really help keep me going.  Most artists (me included) look negatively at my art. I used to be like, “take a look at my crap”. But after I got so many compliments, even from professional artists, I had to stop.  I find it’s easy to see flaws in your own stuff, after all I put them there. 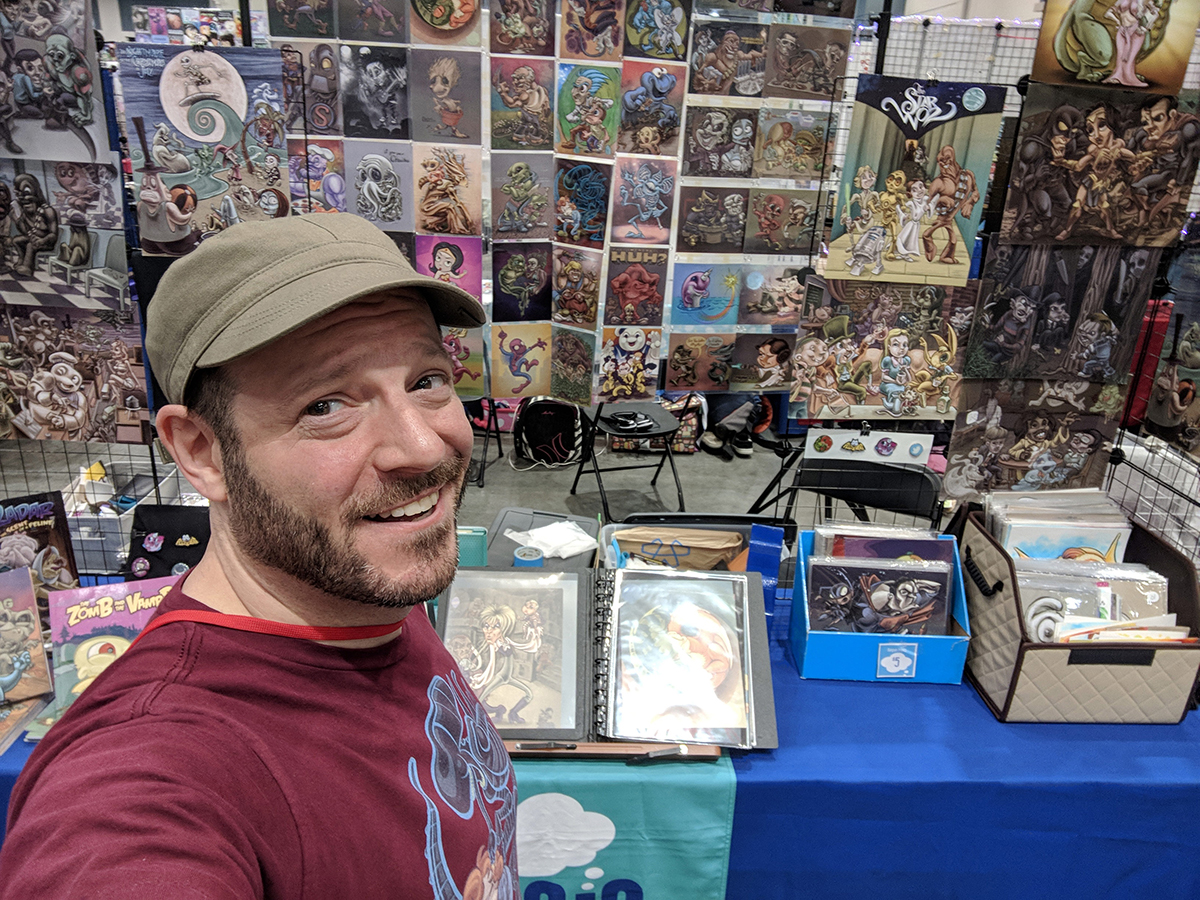 If you haven’t yet caught up with Jonathan at a conventions the good news is he still has a few coming up. As he mentioned he does horror conventions as well as comic conventions because — let’s face it — there’s a lot of overlap in fans. Of course, never having been to a horror con I had to be nosey:

How do horror conventions differ (if at all) from conventions like MegaCon and DragonCon in terms of what people are looking for or ask you to draw?

At horror cons it’s more intimate. It’s less saturated with artists but more importantly they are open to different art styles, which is my thing. I find at traditional comic shows they want the art how the art looks in the comics (more so). The horror shows tend to be in hotels, it’s a bit more of a party and it’s more conversational.

Okay, I’m sold. I’ll have to try to hit up a horror con next year. In the meantime, you can catch Jonathan at the following conventions coming up:

Or you can follow him on social media to keep up with his future events:

And of course check out his site you may find a few Christmas present for those hard to buy for loved ones:

Get the Most From the Disney Theme Parks With Touring Plans