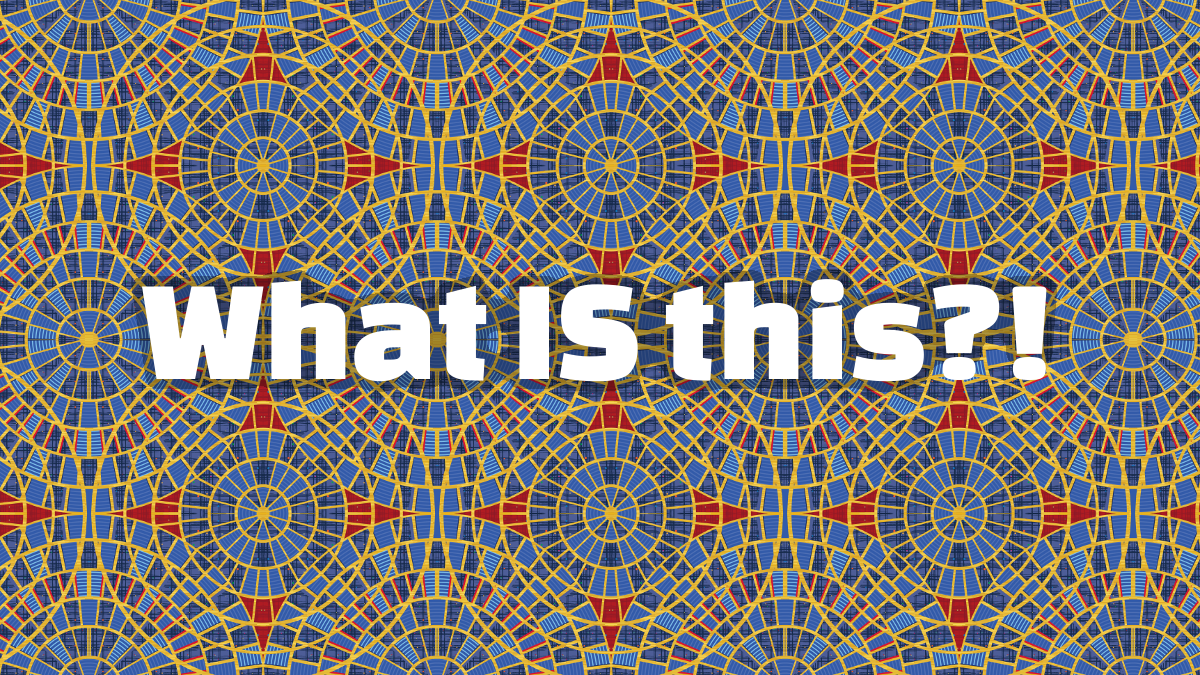 Perhaps you’re embarking on your first Dragon Con this weekend, or you just keep seeing posts about it in your feed and are trying to figure out what’s going on. You can learn a lot from the Dragon Con website — who the guests are, where the contests are happening — but there are some things that you have to learn on your own. Let us help answer your questions and get you a head start on decoding the next few days.

I keep hearing about DragonCon TV (and seeing it before panels), but I’m not in a host hotel!

<farnsworth>Good news, everyone!</farnsworth> You can buy a streaming membership for $10 and get the same DCTV that’s running in the host hotels — bumpers, amusing videos, and broadcasts of panels. Plus you can keep watching for three months after the con is over. Bonus! Best $10 you’ll spend at the con. You can get all the info over at dragoncon.tv.

Why do people keep talking about carpet? (or) Why do I keep seeing people wearing the same blinding pattern?

The Marriott Marquis has been an important part of Dragon Con since 2001, when it was added as a second headquarters hotel. (This is also the year that the con reached 13,000 attendees. Compare that to this year’s expected 85,000!) The Marriott has been through a lot of carpet over the years, as hotels do, but at one time, it looked like the header image above.

And people mocked it. They called it ridiculous, garish, and all sorts of other names.

Then in 2013, the fantastic Harrison Krix (aka Volpin) and friends created camoflauge suits to match the carpet, and the seeds for the cult of the carpet were planted. (And the costumers got a cease and desist. I’d also like to note that Volpin Props does amazing work that has nothing to do with hotel flooring, and you should definitely check that out.)

Then in 2016, the Marriott replaced the carpet, with what has been nicknamed the “skidmark carpet.” When the now-beloved carpet was ripped out, fans went and “rescued” it from the trash heap and sold chunks of it on eBay and Etsy. Now they use the design to make costumes, cover cars, march in the parade, and attempt to reassemble the carpet. Devotees can join others in the Marriott Carpet Lovers Facebook group. We feel about our carpet like PDX travelers do theirs.

Who the heck is “Trashy”?

Fans of the carpet can also gather for a now-annual photo op with “Trashy.”

As with any longtime gathering, eventually some folks will start to complain about “the good ol’ days” and how it all used to be better back when. Yawn. A few years ago, this sort of sentiment was starting to feel like it was overwhelming the Dragon Con online communities. Venting about the problem, Jimmy Burns posted sarcastically in one of the Facebook groups: 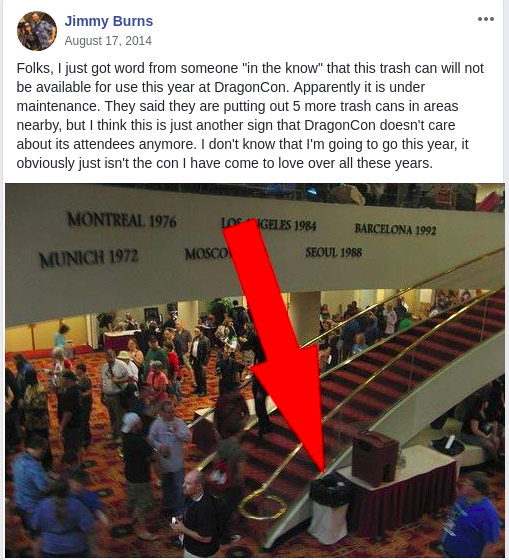 Another legend was born. In 2018, cultists (and lovers of Trashy) will gather on Thursday for the third year to memorialize the dearly departed Trashy and Carpet.

What is pie? I get the impression it doesn’t involve grandma or a crust.

I suppose grandma could make your pie. Depends on your grandma. Pie is homemade liquor. Apple is a common flavor base, but you’ll encounter all sorts of people willing to share their pie in all sorts of flavors. Whether you’re willing to share a stranger’s mystery beverage depends on your trust in that stranger’s brewing and your willingness to play Con Crud Roulette. If you’d rather make your own pie, there are plenty of recipes available. Try this reddit thread, or this dragonconforums.org one.

Did I just see people getting married in the middle of the con?!

Probably. That’s definitely a thing. Offer them some post-wedding pie.

I found a [painted rock, button, perler-bead-thing, really cool item]. I hope somebody didn’t lose it! Where’s lost and found?

If you found something that you think is really lost, like a badge or phone, take it to the lost and found in the Dragon Con Security office in L405–406 (Marriott). But if it’s a cool trinket, there’s a good chance it was left there for you to find! The Dragon Con Swag ‘n Seek group has really exploded this year. I’m hoping everyone who is leaving super cool things for finders is also leaving tags with them, because there are definitely some people in that group making things I’d think were forgotten, not gifted. But if you’re not sure, try posting to the group to see if you found one of their goodies! If you’re specifically interested in finding (or hiding!) rocks, there’s a group for that, too.

What is that costume?

Good question. When in doubt, I usually assume it’s an anime I’ve never seen. But Dragon Con is known for its amazing costumers, and there are a lot of possibilities! It could be an original character or a mashup. Never hesitate to ask a costumer about their work. They’re happy to share!

Speaking of costumes, is there a Deadpool convention here too? I swear you can’t swing a targ in here without hitting three.

Not exactly, but it is a popular choice. There were a lot of ‘Pools (and ‘Pool mashups!) before the recent movies, but now there are even more. They have a pool (ha) party and a photoshoot, followed by the Chimiconga in which all those ‘Pools you’ve been seeing get together and conga line through the host hotels. High five a ‘Pool or a hundred!

Speaking of photoshoots, if Deadpool isn’t your thing, there are photoshoots for just about everything you can imagine. Go watch one!

I am lost in the AmericasMart. Send food.

Oh, friend. I’ve been there. Stick to the walls, and eventually you’ll find your way out. Try not to spend the next rent payment on all the awesome stuff you pass in the vendor booths. (Just half a rent payment is fine.)

But let’s talk about the food situation. One of the most common destinations for a quick bite during the day is the Peachtree Center food court, easily accessible through the “habitrail” elevated tubes that connect most of the host hotels. This year, they’re under renovations and seating could be tight, but they’ve promised it’s all going to work out: 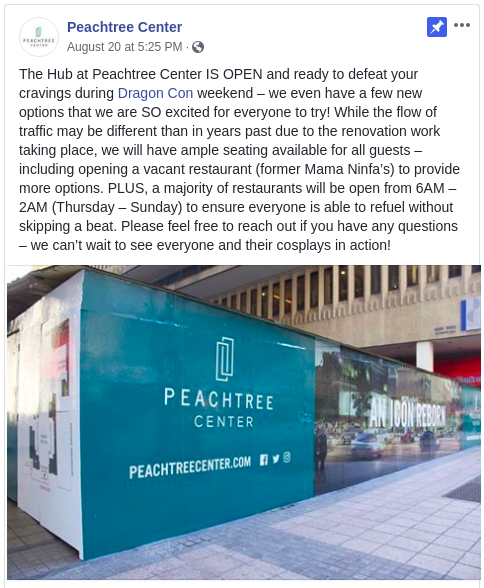 But whatever happens over at Peachtree, you should know there’s another food court. It’s in SunTrust Plaza, which you will pass from time to time and not even realize it’s there. It also in the past has been open only during the week, which doesn’t help when you need food over the weekend. However, this year they’ve announced they’ll be open on Saturday as well, opening up a few more options to hungry con-goers: 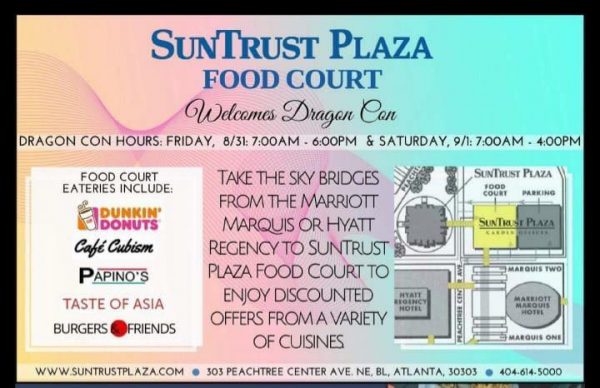 I keep finding more things to do. The app says I already have 5 events scheduled at 2 am, and I don’t know how I’m supposed to see it all!

You can’t. I’m sorry. Dragon Con has many things, but not one of them is a functioning time turner, Delorean, hot tub time machine, cosmic treadmill, or TARDIS (though there usually is a non-functioning one you can take pictures with in the Hilton lobby). You’re going to have to make choices. They’ll be good. Have no FOMO. Just a great time.

More questions? Tweet at me (@suehle), and if I can’t help you, I’ll point you at someone who can.

What the GeekMoms Want for Mother’s Day

The Pet Dilemma and the Neighborhood Cat