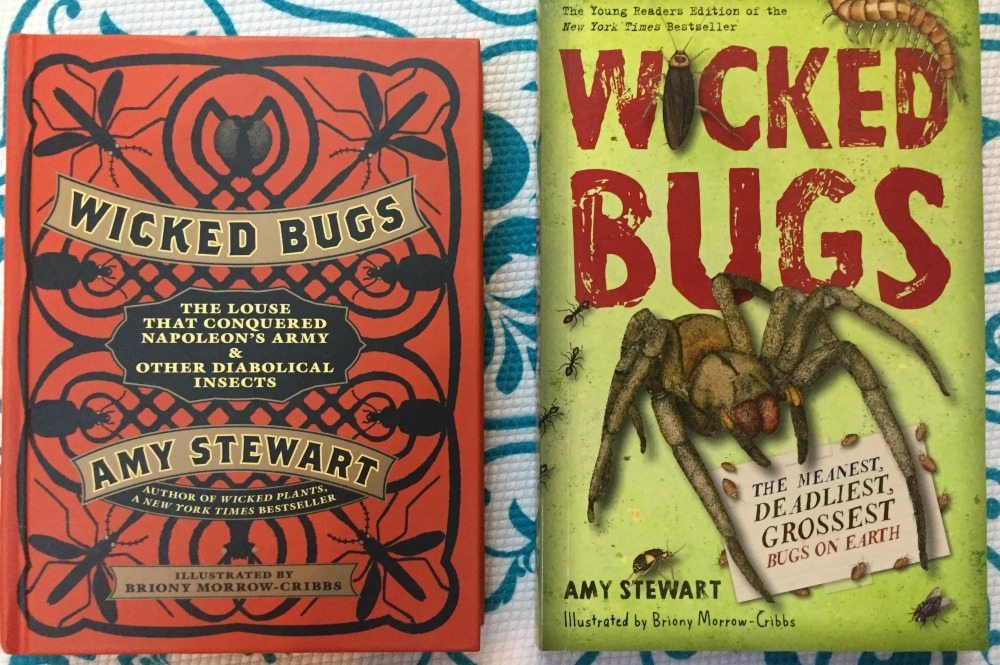 My 9-year-old son has been interested in insects for years. Here is the little fella, at age two, visiting a butterfly sanctuary:

And when I say he was “interested in insects,” I’m not just talking about your standard bugs. Oh no.

I kid you not, one of his favorite books at age three was titled Body Baddies: All About the Mini Monsters Living on You! by John Woodward. (The image of the guinea worm still gives me nightmares!) His other favorite book at the time was 1001 Bugs to Spot. I bet you I could still find all the dung beetles in seconds!

Nowadays, he’s graduated from Body Baddies and 1001 Bugs to Spot to other books, and he can’t get enough. And so, when I heard that Amy Stewart’s New York Times bestselling book Wicked Bugs now has a young reader companion, I had to check them out!

There’s something magical about sharing a book alongside your child. It fuels conversation, builds connection, and makes memories. And summer is the perfect time to have a family book club!

Wicked Bugs is the New York Times bestselling book by Amy Stewart. Stewart is known for writing about the wonders and horrors of the natural world. You may recognize Stewart’s name as she also wrote the bestselling book The Drunken Botanist about the many plants, herbs, and fungi humans have used to make alcohol over the years.

In Wicked Bugs, Stewart will have you itching for more as she wows and disgusts you with creepy-crawly facts and stories. And now, you can share the fun with your children! Wicked Bugs: The Meanest, Grossest Bugs on Earth is the young reader edition of Stewart’s popular book.

This fact-filled book will entertain, wow, and horrify the bug lover in your life. Featuring full-color illustrations, young readers will learn about the amazing powers of those six and eight-legged creepy crawlies. Kids will learn about a multitude of insects including the Bombardier Beetle, the Giant Centipede, the Schmit Sting Pain Index, Chigoe Flea, and Death-Watch Beetle, among many others!

My 9-year-old just started the book this week and I can’t wait to discuss it with him. I’ve heard lots of laughter and “ewwws” so far, and he’s barely put it down. I have a feeling it’s going to be as big a hit as Body Baddies!

Now, it’s your turn. Tell me: Do you have a family book club? What are you reading?

Junie B. Jones Is Ruining My Life

The Tragedy in Japan: How Much Do We Tell Our Budding World Citizens?