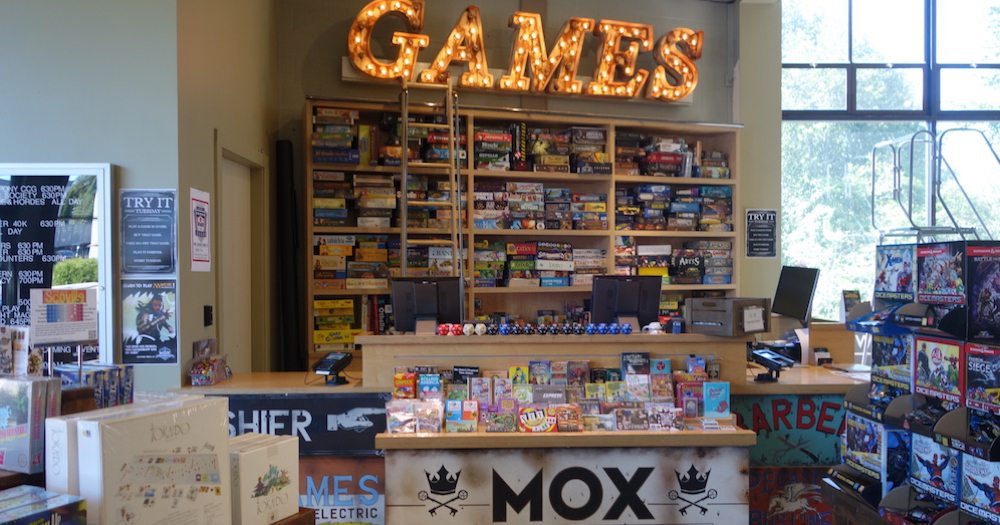 Mox also hosts charity events for local groups, and May 21 brings one of their biggest events of the year with the help of sponsors like Wizards of the Coast and Lone Shark Games. “The Gauntlet” is an invitational board game tournament benefitting Treehouse, a charity for children in foster care, and it’s not too late for you to be involved.

Mox started with its first location in the Ballard neighborhood of Seattle, Card Kingdom. Card Kingdom originally started as an online store to sell Magic: The Gathering cards, and a physical location became the next step for the savvy owner.

“Over the years, they added a brick and mortar component,” says Lyla Ross, Program Manager, “and now we have two locations that include a family-friendly restaurant, and a free games library where families can hang out, grab a pint and a meal, and enjoy each other’s company.”

Ross uses her social work background as Program Manager for ENGAGE, the charitable arm of the store. “We created The Gauntlet, a teams-based invitational tabletop games tournament where our invitees are local games studios, designers, and community gamer groups,” she says.

This is the fourth year of the event. The first year, Mox raised $26,000 for Child’s Play, and subsequent events benefitted Hopelink and YouthCare. “We’re hoping to surpass our event goal of $60,000 for Treehouse, and it’s looking promising!” says Ross.

“Although this event is an invitational, and we already have our teams in place this year, we have a ton of awesome donations that we get to raffle and auction off,” Ross says, “and we want the families from Seattle/Bellevue area to know about it!

“We also have free family-friendly activities happening in the front of the store and restaurant, all day.  We are also always looking for new teams each year, so send folks our way, if interested.”

If you’re not in the Seattle area, you can still help! Consider making a donation to Treehouse on behalf of a team participating in the event. You can also watch the event live on Twitch on May 21.

Don’t Sit Up Straight: Why a Natural Posture May Be Better