I am a huge fan of the DC SuperHero Girls line. The costumes are adorable, the action figures are age-appropriate in terms of both anatomy and uniform choice, the animated shorts are cute (though I could do with less Cheetah mean-girl drama), and the hour-long television special was beloved by both my daughter and my son as it should be. We always complain about the boys getting the good toys; it would be hypocritical to deny them the joy of the SHG radness.

The collection of visual media, toys, and books is also a huge step forward for DC in terms of demographic inclusiveness and recruitment of new fans. Applause, well done.

I had assumed it was only the first step in an initiative.

You know what they say about assumptions.

Imagine, if you will, the swarming of the rage bees I experienced last night while watching the adult-oriented (swearing, violence, blood, yet more murdered parents) Bad Blood and Justice League vs. Teen Titans when I realized that not only had the initiative failed to materialize but DC had chosen in these films to banish their superhero women back to the dark ages.

I don’t love the newer, animated Wonder Woman costume and I still think she should have pants but, okay, the vital personal parts of her anatomy are covered and contained. Batwoman’s super suit is actually viable as such and she, at least, is armored everywhere important.

Take her out of the suit, however, and Kate Kane is, apparently, just as much an object as any other DC heroine. At least, that’s what’s implied by the utterly gratuitous underwear fight scene.

Allow me to set this up for you: Kate is at home, attempting to decrypt a hard drive. She is doing so wearing a very short robe which is, as we arrived, belted shut. Is it what I wear when I’m doing tech support? No, but, okay, work from home, etc., I know there are plenty of people who teleconference in a collared shirt and boxers. I can let it go.

Until we find out Kate shares the house with her father. Do you walk around in your underwear in front of your father, ladies? No? Me neither. My father hasn’t seen me sans clothes, even when I was in labor, since I was eleven and having a suspicious mole removed from my right butt cheek. Am I a prude? I don’t know, maybe, but it isn’t something I’m comfortable with.

Regardless. Dad comes home and it turns out he’s been brainwashed by Talia al Gul. He attacks Kate (which is a whole different article). She fights back, as well she should. In doing so, her robe comes open and she ends up fighting her father in her bra and panties.

I have no idea. It is totally unnecessary and it’s gross, especially in a universe/framework wherein violence is often equated with foreplay. (That would be yet another article and one that would have to include some glaring Marvel slip-ups as well.)

I get that, in a fight, one’s robe might come undone. Fine. But if she’s going to be fighting, why put her in the robe in the first place? Clearly so that it could come open. While she was fighting her father. Resulting in Batwoman fighting her father in her underwear.

The only reason for events to roll out that way is so that Kate Kane would end up wearing as little as possible. So that a strong and powerful woman is made to be vulnerable by being naked. Which, by the way, doesn’t make her victory any more badass.

This is not tantalizing. It is gross.

It makes the viewer a voyeur and it made me really uncomfortable.

Let move on to Justice League vs. Teen Titans.

I think we can agree Starfire’s costume has always been problematic. It was problematic when she was a teenager because it was clearly for the edification of the school-girl fetish crowd, which is also icky. Let me be clear: if an adult woman chooses to take on that role for her partner, and they both enjoy it, power to them. But grown people should not be looking at actual teenagers that way. It is pervy. It is also, were she an actual child, illegal.

Sadly, while Starfire has grown up, her costume has not. Literally, it’s the same size as it was years ago but now, she has very well-developed lady parts which are barely contained by her boob window.

That’s all history, however. What bugged me, even more, was something new. During a scene at a carnival, Trigon attacks Raven and the rest of the Titans go to her aid. Beast Boy and Robin are wearing their uniforms under their clothes. Blue Beetle has some sort of under-armor.

Starfire’s clothes burn away, leaving her naked for several beats until her “uniform” comes out of nowhere to sort of cover her.

No, you don’t really see any anatomy, just an outline but it is very clear that she is completely unclothed. And again, there is absolutely no reason for it. Like Kate Kane’s underwear fight, it transformed a powerful woman into an object of the male gaze. It isn’t as though her uniform is so bulky it won’t fit under regular clothes; hell, when Batwing armors up for the first time in Bad Blood, that armor goes on just fine over dress pants and a collared shirt. The only explanation for her nudity is a deliberate choice to strip a hero naked for ogling purposes.

My husband  frequently tells me he thinks I take these things a little too seriously (and he is firmly in the feminism camp), though he has definitely become more sensitive since we had a daughter. This Starfire thing, though? Before I even inhaled, he looked at me and said, “Yeah, I didn’t think this was okay either.”

DC, you give us girls and then, when they become women, you strip them all of their gains, literally and metaphorically.

That is not okay.

You were so close. And we have higher expectations now. We know you can do better.

Don’t show our girls they can be heroes and then turn them into objects of fantasy. Don’t give our boys the expectation of being permitted to gaze upon intimate moments of a woman’s life without her permission.

We all deserve better.

Get on that, would you?

My Favorite Quotes from ‘Rogue One: A Star Wars Story’ 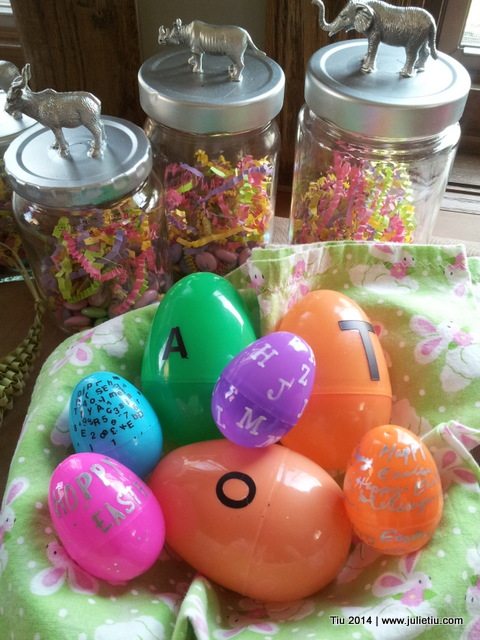 Quick Ways to Dress Up Plastic Easter Eggs With Lettering