My son will pretty much do anything to get his hands on my iPad. He has plenty of his own devices, but that doesn’t keep him from ogling my iPad’s big, beautiful screen and whatever apps I’m checking out. I don’t mind forking it over if he’s using it wisely. Like I said, he has plenty of other portables for comics, books, and games. However, Storied Myth is a good reason to give up my precious portable. This is an iOS exclusive that combines reading with hands-on activities.

Storied Myth is an app that weaves a series of stories in with an “adventure kit” that includes puzzles and other trinkets. After you finish reading each chapter, there’s a puzzle that will help you move on to the next installment.

The main story is called “The Quest,” and it focuses on a pair of twin brothers from Ayodhya, a city in India. The two are archers, preparing to go to the Pangea Youth Games. However, things go awry when a pendant goes missing.

There are a few things that I absolutely love about Storied Myth. First and foremost, the characters introduce readers to a different culture. However, despite having some diversity, I feel that Storied Myth really missed out on a ton of teaching moments. (And I really hate that phrase.) There are so many places, events, and other things mentioned here that most children will not recognize. Heck, some of the situations would send a lot of parents scrambling over to Google. It would be nice to be able to click on words in the story and have a glossary pop up or maybe some type of integration with Wikipedia.

That said, it’s nice that Storied Myth never takes you out of the app. There are no third-party links, ads, or in-app purchases either. You can stay completely focused on the story!

The story does have a few typos in it, but my 9-year-old was pretty riveted. And once he got to the end of the first chapter and realized there was a puzzle to solve, it pretty much blew his mind. Being 9, I think my son is in the sweetspot for this product. The puzzles aren’t easy, but shouldn’t take long to solve either. They also involve verification from the app using the camera—another feature my son loved. In fact, each puzzle had him scrambling for the next chapter to read.

Speaking of which, Storied Myth does have a “read to me” option or you can turn off the narration and music. We enjoyed having someone else read the story, even though it would have been nice to mix up voices with the sound of children. I found the background music to be a bit distracting, but it did build up suspense in some parts.

Storied Myth isn’t like your average subscription service, because it’s a one-time purchase. You are responsible for doling out the puzzles, based on your child’s progress. The current adventure kit costs $24.99 for chapters 1-5. The company plans to release a second kit for book two, which will cover chapters 6-12.

Once you get through those chapters and puzzles, there are other stories to read within the app under “Tales from Pangea.” This section gives a nice spotlight on all of the characters featured in the main story. According to the company, additional games will be added over the coming months, so you won’t have to worry about those puzzles collecting dust.

I’m curious to see what those will be. I love the idea of making reading into an interactive experience—and my son certainly agreed. He couldn’t get enough of the story once the puzzles were introduced. And these pieces aren’t flimsy at all. Each puzzle is really sturdy and well made, so it would be great to use them over and over. Not only does it recycle what we have (we have enough toys that just sit), but it will also make Storied Myth more worthy of the price tag.

All photos by Rachel Cericola. GeekMom received this item for review purposes. 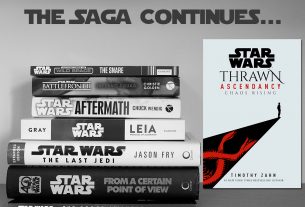 What It’s Like to Die in a Black Hole

1 thought on “‘Storied Myth’ Is a Hands-On Reading Experience”