Three years of New York Comic Con visits. Three years of trial and error. Three years of family additions to NYCC. How do you negotiate that kind of insanity? Why yes, after explaining all the new additions, there is a guide to “How To Keep From Losing Your Child or Your Sanity.”

Let me first convince you as to why you want to take the littles. Then, learn from my experience as to how to make it fun.

As post after post would travel through my feed showing me pictures of amazing cosplay, panels that seemed to be once in a lifetime experiences, and limited edition items or free swag that seemed incredible, my sitting-at-home-on-the-couch-with-a-baby self moped.

It’s too crowded, too expensive, too loud, too overwhelming to do with a child, I thought. Then, in 2013, back in those Jurassic days of being able to buy a Sunday ticket a month in advance, we decided to drive down for the day. One bright Sunday morning, we packed the two adults and one four-year-old into the car, expecting an epic adventure. The adventure was epic, complete with New York City parking ticket.

However, in 2013, even the kids’ day family friendly events were few and far between. Overwhelmed, we focused on the the main exhibition floor and on The Block. In a nutshell, we shopped. A lot. Last year, there seemed to be a few more family events. However, finding a place to bring an overwhelmed kid proved difficult. Again, shopping, shopping, and more free swag.

This year, however, the Family HQ was much more prominent. NYCC did a really great job of listening to us parents and reaching out to provide programming for all ages. Granted, a lot of this meant sitting and watching television or playing video games, which could all be done at home for a lot less money.

However, it also provided a place where the kids could hang out happily if the parents wanted to go walk around and see things in which the kiddos have no interest. Family HQ’s expansion included two new rooms. In 2014, NYCC provided three rooms of family programming which included seven programs available Thursday, fifteen on Friday, twenty on Saturday, and seventeen on Sunday.

Although this is better than a lot of conventions, for a large convention with a lot of parents, this is fairly sparse. Most of the programs were hour programs, meaning that there was no specific location to bring overtired, overwhelmed kids. This year, however, Family HQ had its own icon on the NYCC app. Five programs were available on Thursday, twenty on Friday, twenty-four on Saturday, and nineteen on Sunday.

Walking past Family HQ, one of the biggest attractions was Room 1C-03: Yo-Kai Watch. Despite the program itself, an odd little cartoon that had weird ghost-like characters and talked about “dropping a deuce,” most parents did not seem bothered that the television was something they might not allow being watched at home. The room included board games, Yo-Kai Watch playing on an endless loop, and video games. At varying times, there were also character visits and live dance performances by the very kind, child loving staff.

This break for both parents and children, albeit loud, provided a single place kids could go to be kids in the middle of an otherwise “Ohmigoodnesspleasebehave!! Hold my hand! No don’t tantrum!” experience.

This year’s programming in the other rooms included workshops with artists such as Katie Cook, Tony Fleecs, and Agnes Garbowska. On Sunday, every program appeared to have long lines and several were closed before the programs even began. Room 1C-05 had continuous face painting daily. In addition to last year’s Wand Training (which occurred again), this year NYCC offered pirate training and padawan training.

All of these programs appealed to both children and adults, ultimately making the convention more family friendly and more welcoming to the next generation of geek.

So, with all that being said, here is my NYCC Guide to Parents of Younger Kids: AKA How to Do a Big Convention Without Losing Your Child or Your Sanity.

Over the last few years, a lot of the comic cons we go to have added more family friendly venues. Living during the graying of the first generation geeks era also means having children with us to teach them the ways of the geek. In order to ensure future profitability, conventions are beginning to embrace children as guests. As a parent, this is a wonderful time to be raising the next generation of geek, with just a little bit of planning. 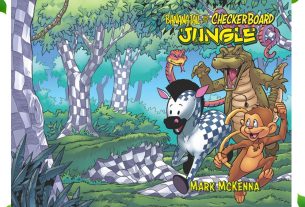 ‘Banana Tail and The Checkerboard Jungle’ by Mark McKenna: A Fun Children’s Adventure.

2 thoughts on “NYCC Guide for Parents of Younger Kids”