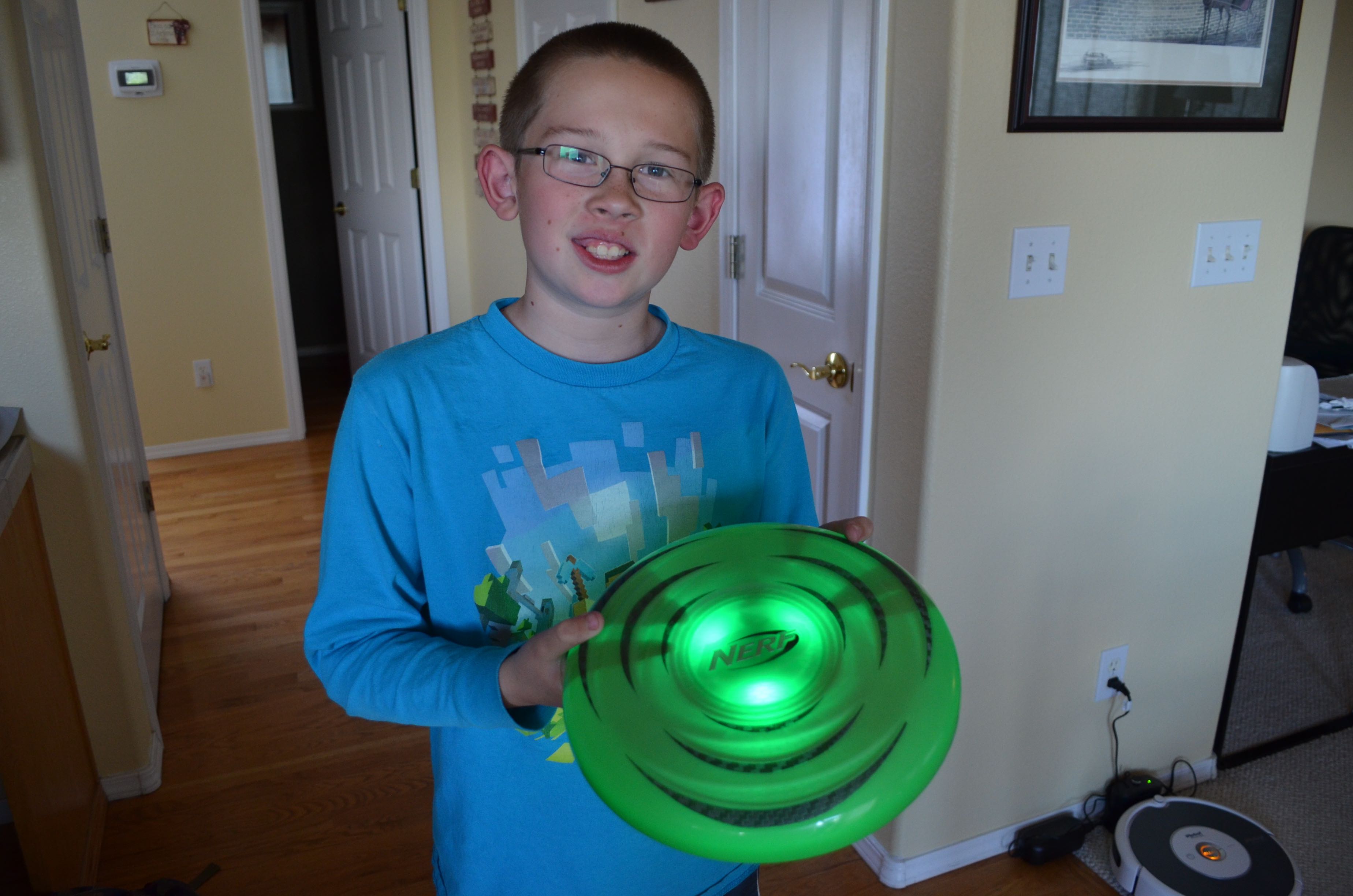 My sons were thrilled when a box full of Nerf products appeared at our door about three weeks ago. We unpacked a Mega BigShock blaster, Zombie Strike Flip Fury blaster, the FireVision Ignite flying disc, and a Super Soaker Flash Flood water gun.

Sadly, while those east of the Mississippi were enduring a pretty incredible heat wave, we here on the front range of the Rockies were dealing with cold, wet conditions. Our neighborhood had accumulating hail, record rains, and an average temperature of only 52.3F. Yikes!

It wasn’t until this past weekend that my sons were able to truly break out their new blasters and give them a whirl.

My oldest son quickly claimed the Mega BigShock. This is his first blaster that takes the large red “Mega” darts, and he is thrilled to finally have one! Included with the blaster itself are two whistler darts, and my son wasted no time buying himself a package of dart refills with his own money.

My youngest son took the FireVision Ignite flying disc out for a spin. Literally! This flying disc is a standard size, but has a battery pack tucked into the back. The disc comes with three A76 batteries ready to go (pull out the protective tab before turning on), and you have a disc that lets you play in low light conditions. I could see this being a perfect thing for an evening on the beach, nighttime tailgates, and good old-fashioned summer play as the sun sets.

Nerf’s Super Soaker FlashFlood hits victims with a double-whammy of water: Out of the same 23 oz. reservoir, there’s a bottom pump that fires off a traditional stream of water, but you can also use a top launcher that blasts your opponents with a “flash flood” of water. Or, as my son said, “A whole mess of water!” The streams are advertised to travel nearly 40 feet, and my oldest son, who claimed the FlashFlood as his own, proclaimed that he thinks it works as advertised.

Finally, there’s the Nerf Flipfury dart blaster, the company’s latest in the immensely popular Zombie Strike line. My youngest son enjoys the Flipfury, which holds 12 of the traditional Nerf blaster darts in two 6-dart revolver drums. The double triggers look bewildering at first, but you will fire the darts with the top trigger, and use the bottom trigger to flip the revolvers back and forth. The darts travel fast and far, routinely exceeding the 80-foot length of our backyard.

My son’s feedback on the blaster is that loading was easy, and he has yet to experience any dart jams. He’s happy with it.

So where can you get your own Nerf blasters and flying discs? Look no further than your local big box retailer or online through outlets such as Toys ‘R Us or Amazon. To sum up:

– The Mega BigShock is small in size, includes two whistling “Mega” darts, and retails for $7.99.
– Nerf’s FireVision Ignite flying disc lights up for fun evening play with an MSRP of $14.99.
– The Super Soaker FlashFlood allows for traditional water gun play with a flash flood option to really soak your opponents. It retails for $19.99.
– The Zombie Strike Flipfury has a double barrel revolver feature that lets users carry double the dart load, with an MSRP of $19.99.

GeekMom was provided with samples of these products for review purposes.

Moms, Get Your Game Face On!

Share the Joy of Reading with Read Across America