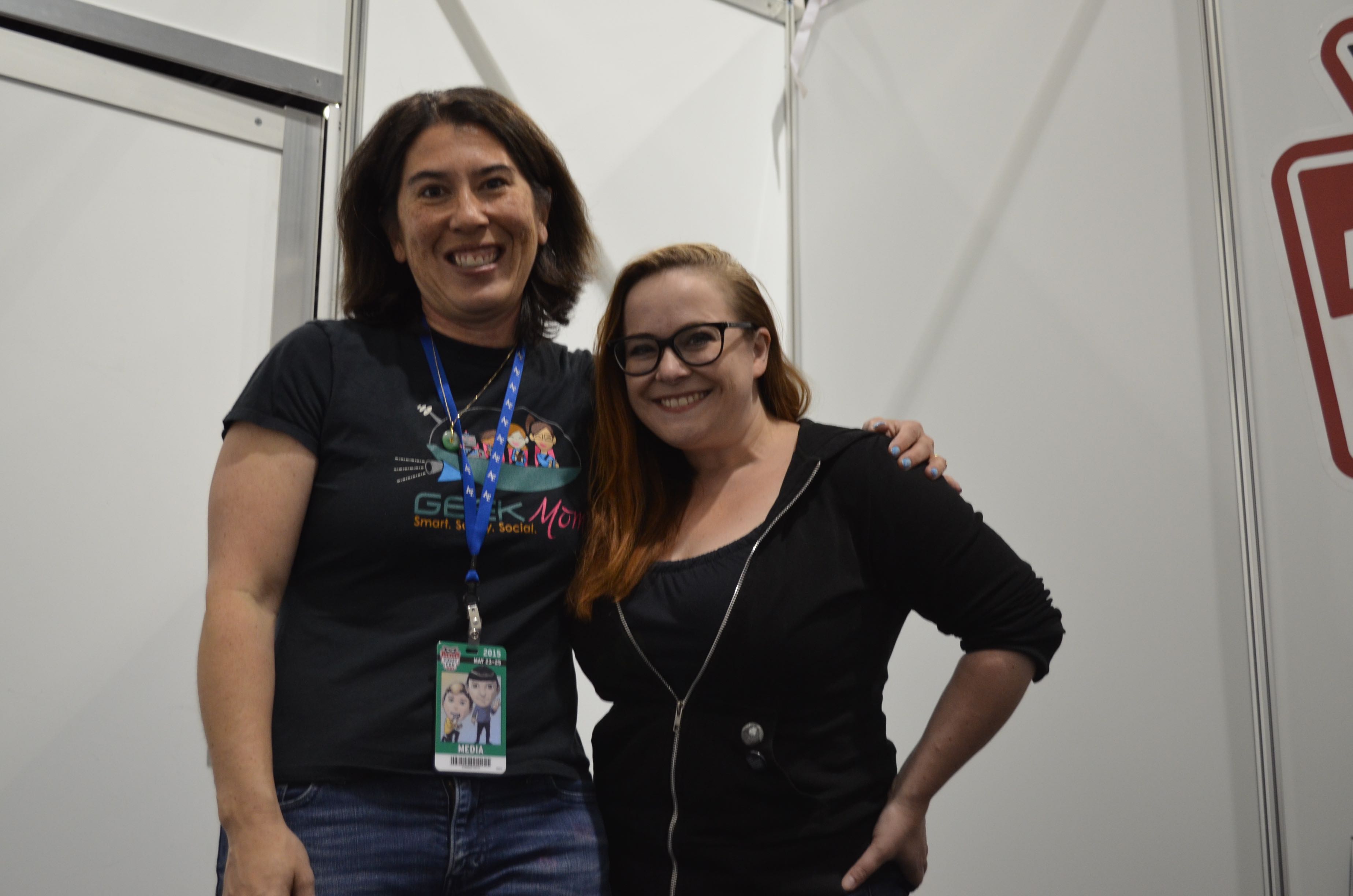 During Denver Comic Con, I had the opportunity to meet up and chat with the awesome Becky Cloonan, co-writer of the DC Universe series Gotham Academy, which returned last week after a late-spring break. On June 23, the first six issues are being released as the Volume 1 trade edition, and will be available both in hard copy and online at comic and book retailers everywhere.

Cloonan is known for numerous other titles with DC Comics, such as being the first female Batman artist in 2012. We had a fun conversation that covered a wide variety of topics. Read on to hear what she has to say about developing Gotham Academy.

GeekMom Patricia: Gotham Academy is a comic that is meant to run in parallel with other DC Comic story arcs. Tell me more about how that works.

Becky Cloonan: Yes, Gotham Academy is running in continuity. We’re part of the larger Batman universe. Being in continuity has a lot of perks, but it also is kind of difficult because DC hadn’t run a lot of YA before. So we’re running into some situations that I don’t think people have had to previously worry about. While the individual issues are still coming out monthly, I think issues 1-6 coming out in trade format as Volume 1 in June is how the story is going to live on. As an example of a continuity challenge, currently Batman is a robot. Let’s say that in Gotham Academy #8, Batman shows up as a robot. Then someone who’s reading Volume 2 [where issue #8 will appear in trade] might wonder why Batman is a robot. Do we want to tell our readers, “Read these comics if you want to know more about why Batman is a robot?”

GMP: I’ve seen that type of thing before in comics.

BC: Right, but in our case, those other comics might not necessarily be age-appropriate. Or what if a reader isn’t interested in those particular comics? So the question becomes, “How ‘in-continuity’ do we keep it?” Do we worry about it or can we elegantly tiptoe around it or do we just ignore it completely?

We are having those discussions right now, regarding whether we keep this book in continuity, or can we keep it as canon?

GMP: That’s very interesting, but I have to admit, I had never given continuity that much thought.

BC: It is very interesting. You will have some readers who are really into it. Someone might be comparing Arkham Manor with the story arcs in Gotham Academy [which are in continuity] and point out where things don’t match. Some of the younger Gotham Academy readers probably aren’t, or shouldn’t be, reading Arkham Manor as well.

BC: Yes. We want to maintain it, while keeping the audience in mind. I think Gotham Academy potentially could be a lot of people’s first comics or books. I’ve had people come up to me and say, “Gotham Academy is my first comic! Thank you!”

It’s great to hear, but then you have the responsibility of this book being someone’s first comic. And I remember my first comic…

GMP: What was your first comic?

BC: Silver Surfer Annual #1 from 1988. My dad bought it for me at the grocery store and it was about the Super-Skrull that could change shape. And there was this huge war that I found so fascinating, and so I got into Kree-Skrull politics at this very young age.

GMP: I think mine was more the order of Betty and Veronica, but similarly, my dad bought it for me at a grocery store or a five-and-dime.

BC: See, we’re dating ourselves now…

GMP: You’re right! We don’t see that anymore, do we? It’s almost exclusively the comic book retailers that are carrying the most recent editions.

BC: Yes, and that’s why the trades are so important. That’s what’s going into the bigger bookstores and libraries. A lot of kids won’t be able to get to a comic book store. When I was growing up, my local comic book store was a 20- to 25-minute drive. I couldn’t get comics on a regular basis until I was 16, when I had a part-time job and could fund my habit.

GMP: I’m grateful for the ability to download the latest issues on our tablets. My younger son is the bigger comic book fan among my two sons, while my oldest hadn’t read much lately because he has to balance the books he has to read for school.

BC: Part of the fun of Gotham Academy is that it is a school. We spend quite a bit of time thinking about what they’re studying. There are a lot of literature references in the story.

We were trying to think of good books to put on a new character’s desk in issue #8, the guidance counselor’s desk. I suggested Turn of the Screw because of the numerous parallels with Gotham Academy: the ghosts, the boarding school, and the supernatural.

GMP: Oh! That’s fantastic! I had to read that in high school.

BC: I believe I read it in a Gothic literature class in college. Thematically, it’s a perfect fit in Gotham Academy.

GMP: I noticed on the DC Comics website that Gotham Academy is considered “All Ages.” Do you think it is?

BC: Well, I don’t necessarily consider Gotham Academy a children’s comic. But younger and older audiences alike will enjoy it.

GMP: My last question is about the strong female characters. I came across one strong female after another, from Maps [Mizoguchi] to Olive [Silverlock] to Pomeline [Fritch]. I’m curious about the, for lack of better terms, consciousness that goes into creating such characters. In other words, do you develop the characters and then say, “This one should be a female” or “This one should be male?”

BC: For this book in particular, I always knew Olive would be the main character, and Olive would be a girl. And she would have a foil in Maps. Ultimately, this comic is about Olive and Map’s friendship, facing adversity together, and helping one another grow.

It wasn’t a conscious decision for me, and I know that Brenden [Fletcher, co-writer] and Karl [Kerschl, artist] tend to gravitate towards female leads as well. I’ve written about male characters as well, but in this case, I had a female in mind all along from when I pitched it to Mark Doyle [Cloonan’s editor].

GMP: Thank you so much for sharing some of the behind-the-scenes glimpses of what it’s like as a comic writer. The continuity challenge you face is incredibly fascinating to me, and I hope our readers find it interesting also.

BC: You’re welcome. This is kind of new to me also, since I had been an artist for writers for several years, and now I’m on the other side, writing for artists. This is my first time in the DC Universe as a writer, so this is new territory for me.

After a break this past spring, Gotham Academy is back now with #7 in your local comic book stores or online. Do you need to catch up? On June 23, the trade volume becomes available with issues #1-6 in its entirety, as well as over 20 pages of variant cover art, scripts, a closeup on the logo, and artists’ first sketches. I had the chance to check out the full volume and my sons and I really enjoyed it. The hard-copy volume will retail for $14.99 at booksellers such as Amazon, and the electronic versions will be available for $11.99 either in Kindle format or else through DC Comics online or Comixology.

GeekMom received media access to Denver Comic Con, as well as a sample of Gotham Academy Vol. 1, for review purposes.

The Hobbit Teaser Trailer is Here!