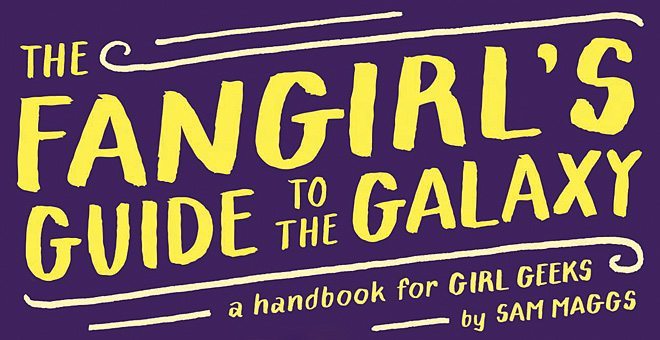 There are some books whose titles that don’t just grab your attention, they leap up and lock your attention in a choke hold until you start reading them. The Fangirl’s Guide to The Galaxy by Sam Maggs, released yesterday, is one of those titles. The second I spotted the book, and its amazing cover, I knew I had to read it right then and there.

I have to admit that when I actually began reading this book, I wasn’t entirely sure who the target audience was. The first chapters contained guides to the biggest fandoms and different social networks on the internet and seemed somewhat redundant to the demographic I pictured in my head for the word “fangirl.” It was only when I began thinking of my 12-year-old self that everything began to make more sense. I first went online aged 11 and found the internet huge, mystifying, and filled with unwritten rules and knowledge that didn’t appear to be shared anywhere. That was 1998 and the internet has only grown in both size and complexity in the intervening years. I cannot imagine what that world must look like to a tween girl taking her first steps today, and that is where a book like this will be worth its weight in gold. While you and I may know exactly where to look up the meaning of “headcanon” or what a “superwholock” is, we must remember that there was once a time when we didn’t–and I assure you neither term will be found in a dictionary.

Alongside the more superficial aspects of the book that include listing accessories you could wear based on your preferred fandoms, there are introductions to some fairly intense subjects covered in a very approachable style. A glossary of terms frequently heard within feminist discussions is included which covers terms like agency, mansplaining, “male gaze,” and privilege. There is also a section covering ways to be a more critical consumer of your media. This section includes explanations of many of the tropes seen in Anita Sarkeesian’s videos (fridging, damseling, and the Manic Pixie Dream Girl) but also covers topics like the romanticization of abusive behavior in fiction in a non-judgmental way–vital knowledge for all growing fangirls given the popularity of characters like Christian Grey and even classic figures like Heathcliff and Mr. Rochester. I was particularly happy to read the section on role models which introduced a plethora of fantastic characters from comics, film & TV, games, books, and anime. I was lucky to grow up surrounded by lots of fantastic female role models in the media I consumed with my family (Dana Scully, Kathryn Janeway, and Buffy Summers all spring to mind) and hopefully this list will inspire readers to go out and explore these characters for themselves.

The book isn’t all serious explorations of what it means to be a woman in media though. There’s a lot of more lighthearted fun content as well. The guide to the biggest online fandoms works as a great introduction for anyone new to online discussion. It covers not only the defining characteristics of these fandoms (Star Wars fans, for example, are described as having “a simultaneous respect and disdain for George Lucas” while Game of Thrones/A Song of Ice and Fire fans have “an understandable aversion to weddings”) and how to join them, but also the unending debates unique to each one. This can be vital information, as anyone who has unwittingly joined a Supernatural group and asked, “So what do you guys think of Destiel?” will attest. There’s a list of tips for writing fanfiction–a daunting if immensely popular hobby in the world of fangirls–and a glossary of terms found within that particular world for those unfamiliar with what the summary “Destiel PWP Mpreg AU Drabble*” is describing.

While I wouldn’t count myself among this book’s key demographic, I still found plenty to love about it and plenty that I wanted to research more deeply as a result of reading. For example, the Red Sonja comics are now on my to-read list after appearing in the guide to role models. For those who are a part of that demographic, this book could be invaluable. A resource to turn to when you don’t know where to begin online and a reassurance that there are indeed many of us out there navigating the same confusing waters. My eldest niece turns 13 in a few weeks’ time, the minimum age for creating accounts on many social media platforms, and I have a feeling a copy of this book will soon be on its way to her. If you know a tween/teen girl who is taking her first steps online, buy her this book.

*The summary translates as: An exactly 100 word (drabble) story about Dean Winchester & Castiel’s relationship (Destiel) set in an alternative universe (AU) with little to no plot besides erotica/porn (PWP – plot, what plot?) and a male pregnancy (Mpreg).

The Fangirl’s Guide to the Galaxy is out today. GeekMom received this item for review purposes.

Review of The Whisper Jar by Carole Lanham