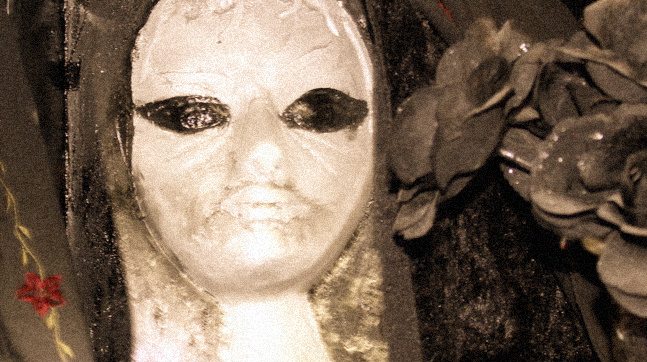 I was three, the same age as Disneyland Park’s Haunted Mansion, when I first visited the attraction. Dad had placed me on his shoulders so I could see over the crowd when we entered the stretching room—something I don’t expect the park still allows. As the doors began closing and the room began stretching, I panicked and started grabbing the tops of other visitors’ heads. They had to stop the “room” and let us off the ride.

One year later, I “braved up” and decided to make it through the ride. I was both terrified and enthralled. The year after that, something clicked and all fear was replaced with awe and appreciation for this amazing work of immersive-style storytelling, which was the Haunted Mansion. The ride remains one of my favorite attractions at the park, and I try to do a little something new each Halloween to pay homage it.

For this year’s 45th anniversary of the attraction, I’ve decided to finally try to create a prop I’ve been wanting to do for some time: a hollow bust. The mansion’s busts depict a stern old woman and a younger, sinister-looking man. I’ve never heard the name of the man, but the woman’s name is “Aunt Lucretia,” according to some early concept art of the attraction.

The prop takes advantage of the “Hallow Face Effect,” a play on perspective. In simplest terms, this effect occurs when the eye looks at a concave (facing inward) sculpture just right, making it appear to be a moving, convex (facing outward) sculpture. I talked about this effect in greater detail in an earlier GeekMom post.

The best part is: It really isn’t that hard to make.

What You Need:
• One Styrofoam (wig stand)
• A shallow, rectangular storage bin
• Pottery plaster (about 8 lbs.)
• Grey, ivory, or silver acrylic paint (for face) and black paint (for outer edges)

This craft is, at the core, creating a simple mold, using a plain wig stand. The difference is in the painting—and in the angle of a light source.

If the wig stand’s face isn’t as detailed as you want it, “ugly it up” with tape or craft foam by making the nose or chin pronounced, adding shoulders, hair, etc. Use craft glue, not a hot glue gun, as it will erode Styrofoam surfaces. Ours ended up looking like a robot alien after it was all said and done. Once you get the head looking the way you like, mix the plaster according to its instructions and pour in the bin. Some plaster can get pretty hot when mixed, so make sure to heed all safety precautions listed on the package. Place the head face-first in the plaster, and let it sit until dry.  Remember, Styrofoam floats, so place a small weight over the bust for at least the first half of the drying process. Tying a couple of strings around the container and bust will also hold it down.

Slowly remove the head, and you’ll see a concave version of the face. This is your “hollow face.”

Paint the face, adding some shading, contours around the cheeks and nose for better results. It doesn’t have to be complicated; this is something kids should be able to do with a big brush. If you want a shimmery effect, add a little glitter spray once the regular paint is dry. Finally, paint the outside of the plaster black, making sure not to get any of it on the face itself. It should appear to be an actual bust standing near a black background.

That’s all there is to the actual construction, but do we get the best effect?

This illusion is all about perspective, so place it against a far wall at the end of a hallway or back in a porch garden where people can walk by a distance of a few feet. Set it at eye level or a little higher and place a light source slightly below it. Flashlights work well, but for an extended period of time, cheap solar lawn post lights work fine for outdoor use.

People walking by should be able to notice the effect if set up properly, and party guests or trick-or-treaters should be impressed (and hopefully delightfully spooked).

The face doesn’t have to look beautiful, as long as it works…and it will work. For a quicker, more “professional” looking version, substitute a store-bought Halloween prop bust or gargoyle for the wig stand. Here’s a brief clip of a bust in motion. The production value is rough, but the effect works just fine.

Store this face with the lid on the container when not being displayed, so you can enjoy them for several years.

After all, they are “dying” to meet everyone. 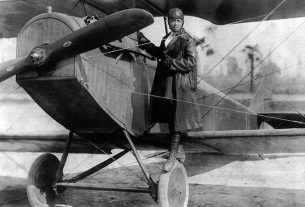 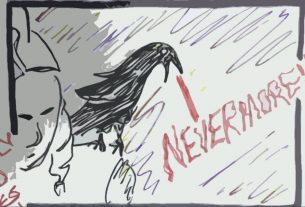 Be the Artist: Storytelling With Storyboards