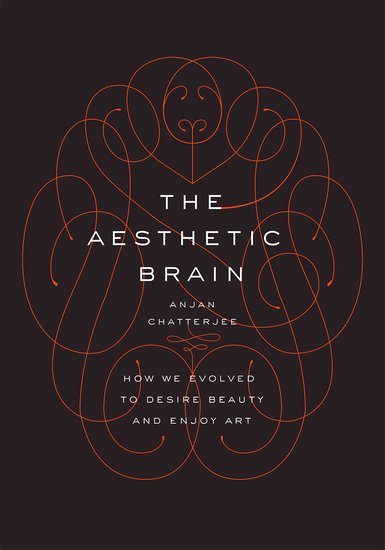 The first time that I tried to read Anjan Chatterjee’s book The Aesthetic Brain: How We Evolved to Desire Beauty and Enjoy Art, I made it about halfway through before angrily putting it aside–which surprised me. Chatterjee, the Chair of the Department of Neurology at Pennsylvania Hospital and also a professor of Neurology at University of Pennsylvania’s Perelman School of Medicine, has published extensively on topics like neuro-ethics and neuro-aesthetics. He seems thoroughly vetted and respectable. So, why the vitriol?

The Aesthetic Brain examines monolithic concepts–beauty, pleasure, and art–all through a lens of evolutionary psychology, a theory that ascribes much of human behavior not to personal choice but instead to the choices of our ancestors. Because certain choices lead to a greater chance of survival, they became adaptive, became the preferences and behaviors that were then encoded into successive generations.

In this perspective, feminine beauty and desirability are shackled to fertility. Symmetrical features imply health, which can be passed onto babies, giving them a better chance at surviving into adulthood. An ample bosom and a 0.7 hip-to-waist ratio are also shorthand for physical health, as is youth. By this logic, it is not fat- or age-shaming when women are judged as less-than rather than beautiful when they fall outside of these proscribed criteria. It is simply evolutionary wisdom applying meager odds to their ability to successfully gestate, deliver, and raise a child.

Fortunately, there are also evolutionary limits to how far these preferences can be taken. On the topic of youth, for instance, research actually claims a caveat: While men across cultures prefer women with “some baby-like features,” they also look for high cheekbones and narrow jaws in their partners, because, while youth equates with health, too much youth could indicate that a mother lacks the necessary maturity to adequately care for a child. Hold this conceit to your ear and you can almost hear the gentle murmur of Cercei Lannister asking Sansa Stark if she has flowered yet with her first moonblood…

Women get to do a little judging of their own, of course: Pear-shaped bodies seem to be a no thank you for both genders. In an ideal world, all male chins and jaws would be chiseled, all brows commanding–all a result of optimal testosterone levels. That being said, men also seem to get off a little easier in the appearance department. First of all, too much testosterone actually lowers overall health and ability to fight infection. Second, the hyper-masculine features resulting from high testosterone levels are equated with aggression, an undesirable trait in a co-parenting life-mate, though apparently highly desirable in a recreational-sex partner.

“The story of what heterosexual women find attractive in men is complicated,” Chatterjee says. “Across culture after culture, women rank physical attractiveness less highly than men do. Status, power, wealth, the ability to protect and provide are all more important to women than men.”

To validate this idea that appearance is more important to men while power is what women find desirable, Chatterjee references the internet search study completed by Ogi Ogas and Sai Gaddam and reported in their book A Billion Wicked Thoughts:

“Ogas and Gaddam analyzed Internet searches to find out what men and women chose to search for on the Web. When it comes to desires in the virtual world, gender differences are strikingly clear: Men overwhelmingly search for pornography. The videos are visually graphic without much in the way of plot or emotional engagement. By contrast, women overwhelmingly search for e-Rom Web sites. These sites tell romantic stories often built around a heroic man.”

Personally, I read this and wonder: Is it that women aren’t actually interested in pornography? Or is it that women have received cultural messages telling them they shouldn’t enjoy pornography? Or that most available pornography defines female sexuality by what is actually pleasurable for men? Or as Violet Blue posits in a piece for O, The Oprah Magazine, does it come down to women’s (apparently-legitimate) concerns surrounding body image:

This video contains NSFW language and a brief discussion of sexual violence. It is also quite funny.

In short, so much of what was deemed beautiful in the first third of The Aesthetic Brain reflected back on fertility, on youth, or on a particular body type that I grew progressively more concerned that Chatterjee was providing a research-shrouded rationale for the many ways our culture objectifies women and devalues the intelligence and experience that come with age–what comedian Sarah Silverman recently described when she said:

“As soon as you’re at an age where you have opinions and you’re outspoken and you know who you are, you’re very much encouraged to crawl under a rock, and be embarrassed by any wrinkle. Or by still being alive.”

And so, I put the book aside.

The second time that I picked up The Aesthetic Brain, having pushed past research I’d previously found oppressively reductive, I found that the book began to feel…more like science that I could embrace. Midway through, between discussions of food and money, there was an “Orgasm For Dummies” segment on the neuroscience of why sex feels good that detailed the neurological underpinnings of sexual pleasure:

As you can imagine, it is hard to study what happens in the brain during orgasm. From the little information we have, the ventral striatum is active in men and in women. That activity is to be expected, since so many studies link the nucleus accumbens, a major subcomponent of the ventral striatum, to pleasure. Interestingly, activity in many parts of the brain decreases during orgasm. The ventromedial prefrontal cortex, the anterior cingulate, the parahippocampal gyrus, and the poles of the temporal lobes decrease their  activity. The ventromedial prefrontal cortex is engaged when we think  about ourselves and about our fears. The anterior cingulate is engaged when we monitor mistakes. The ends of the temporal lobes organize our knowledge of the world, and…the parahippocampus represents our external environment. What could a drop in neural activity in these areas mean? Perhaps it means that the person is in a state without fear and without thought of themselves or their future plans. They are not thinking about anything in particular and are in a state in which the very boundaries that separate them from their environment have disappeared. This pattern of deactivation could be the brain state of a purely transcendent experience enveloping a core experience of pleasure.

For me, the takeaway of this particular segment was more pragmatic than titillating, though: If all of the above is true and we are designed in our deepest neural wiring to engage in and enjoy sex, shouldn’t our attitudes toward birth control and sex education accurately reflect this, rather than relying so heavily upon shame, fear, and abstinence?

The final third of The Aesthetic Brain was full of big questions: What is art? What is it’s purpose? Can art exist outside of of its place and time or can it only be understood through context and analysis? Are we hardwired to enjoy and create art–is there an art module in the brain? An art instinct?

It is in this final section that Chatterjee introduces the concept of “drift,” the idea that the freedom to explore new forms of art and new ideas within art is a direct result of the level of social cohesion (control) exerted on the individual. During eras of oppression (high cohesion), art tends to stay within expected, narrow confines where it runs the risk of repeating upon itself, becoming stylized and exaggerated. Meanwhile, during times of revolution, the opposite holds true:

As the constraints on individual social behaviors diminish, acts that rose to be socially cohesive can drift. Art as an expression of social cohesion can change as pressure for art to do the work of social cohesion matters less. This new openness and variety in art can persist as long as countervailing forces do not weed it out.

Could this idea of drift also apply back to our understanding of human desire? In times of oppression when goods are scarce and punishment severe, almost as a safety measure, does our definition of beauty contract, hew closer to evolutionary dictates? Could the inverse also hold true? Chatterjee seems to imply, yes. This drift, then, becomes the space within evolutionary psychology where our species is allowed, when optimal circumstances exist, to experiment with the ground rules–not all of human experience is designed to be proscribed or preordained.

Ultimately, I was brought to a realization with regard to Chatterjee’s work: Just because I found much of the research in the first third of The Aesthetic Brain reductive does not mean that it lacks legitimacy. Among the challenges contemporary life has thrown at us perhaps we need to acknowledge one more. Social progress and the expanded roles women have taken on in recent generations have quite possibly outpaced our neural hard-wiring. To me, this makes a great deal more sense than the idea that we are living in a post-feminist world where sexism no longer exists or that those women who claim to be excluded in the workplace or judged more for their looks or submissiveness than for the quality of their minds are lying or exaggerating.

Disclaimer: A copy of The Aesthetic Brain was provided to me for review purposes.

Confessions of a Nerdy Fashionista

4 thoughts on “Coming to Terms With The Aesthetic Brain”