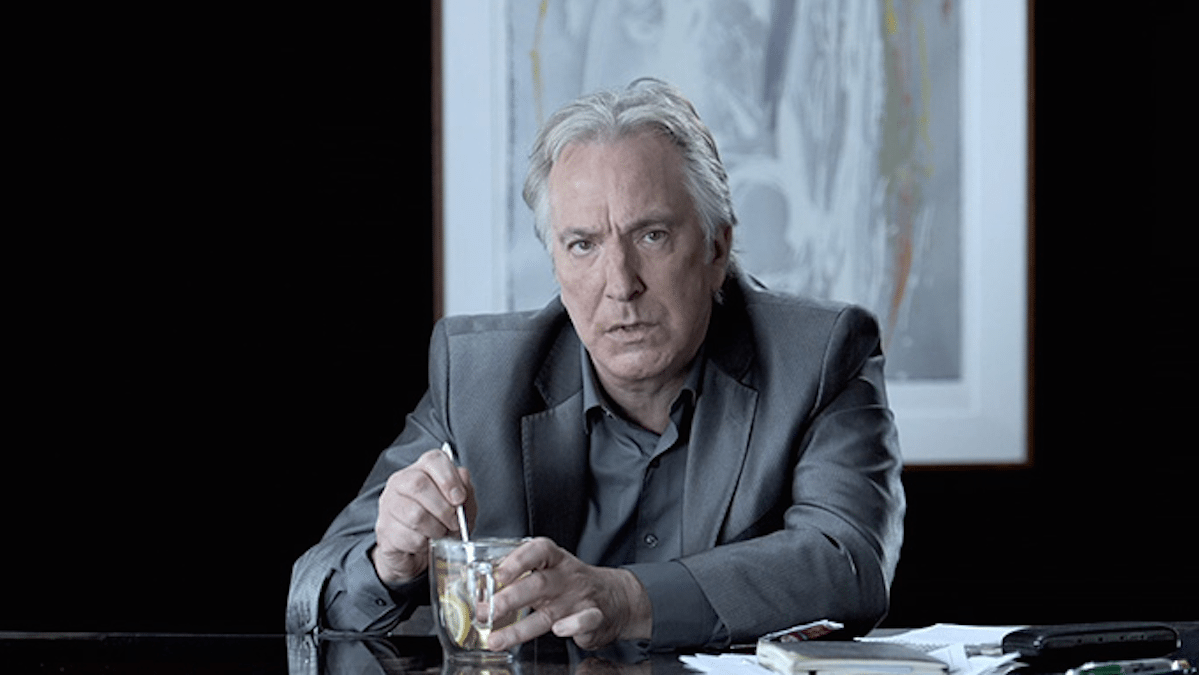 Dust, a short film starring Alan Rickman, made its way though the independent and short film festival circuits with enthusiastic response. Last month, this twisted little tale was made available to watch online through sites like Vimeo and YouTube.

Created with the help of the online crowdfunding platform Sponsume, Dust is the directorial debut of lifelong friends Jake Russell and Ben Ockrent. It not only made the BAFTA (British Academy of Film and Television Arts) Long List for 2014, the result of Round One voting by Academy members, it was an “Official Selection” at film festivals worldwide.

Rickman plays a silent, creepy trench coat-wearing man who follows a young girl and her mother (Broadchurch‘s Jodie Whittaker) home. After lurking in the shadows until nightfall, the man sneaks into their home, where something unexpected happens.

Any more information will give things away, but the ending will not disappoint Rickman fans.

For those who can’t get enough of this multiple award-winning actor’s work, here are two other short doses of Rickman to enjoy:

First, Alan Rickman: Portraits in Dramatic Time. This mesmerizing piece of Rickman dunking tea, then having a table-tossing fit in hyper slow-motion, was part of David Michalek‘s “Portraits in Dramatic Time” project. The project features performers from all genres creating a 10- to 15-second scene in a small space. Michalek filmed the scene with ultra-high-speed cameras, fixed on one angle. The result was what Michalek called in his project description “glacially paced” dramatic narratives condensed down to an essence.

There were other wonderful performances in this series, but Rickman’s “Epic Tea Time,” as it came to be called, was the one that got the most attention with social media viewers.

Stretching this simple, burst of frustration into a 7-minute performance demonstrates how Rickman has more emotional range in a few simple gestures than some actors can achieve in a full-length film.

Second, The Boy In The Bubble. Rickman narrates this animated story about a classic horror-loving boy who foolishly tries to avoid dealing with a broken heart via a magic spell.

Stylistically, it will appeal to fans of Tim Burton’s macabre and heartwarming stop-motion films like Frankenweenie and Corpse Bride, although Burton isn’t involved in the project. Rickman’s smooth, dark chocolate voice is what brings this charming little tale its enchantment. Despite its monster-laden overtones, this film is also a redemptive tale of how those who endure bullying or heartbreak may be tempted to isolate themselves away from their problems.

Irish director Kealan O’Rourke has won several film festival awards for his live-action and animated films, including The Boy in the Bubble. As the first Irish-made film to use the 3D stereoscopic process, the short won two awards when it premiered at the Galway Film Fleadh in 2011, and won the 2012 IFTA (Irish Film & Television Award) for Best Animation.

According to O’Rourke’s official site, The Boy in the Bubble is currently being developed into a feature-length film. There’s no specific talk on whether or not Rickman will still play a prominent part in the feature film, but it would be a shame if he didn’t.

Falling Skies: A Sci Fi Medley Worth Tuning In For