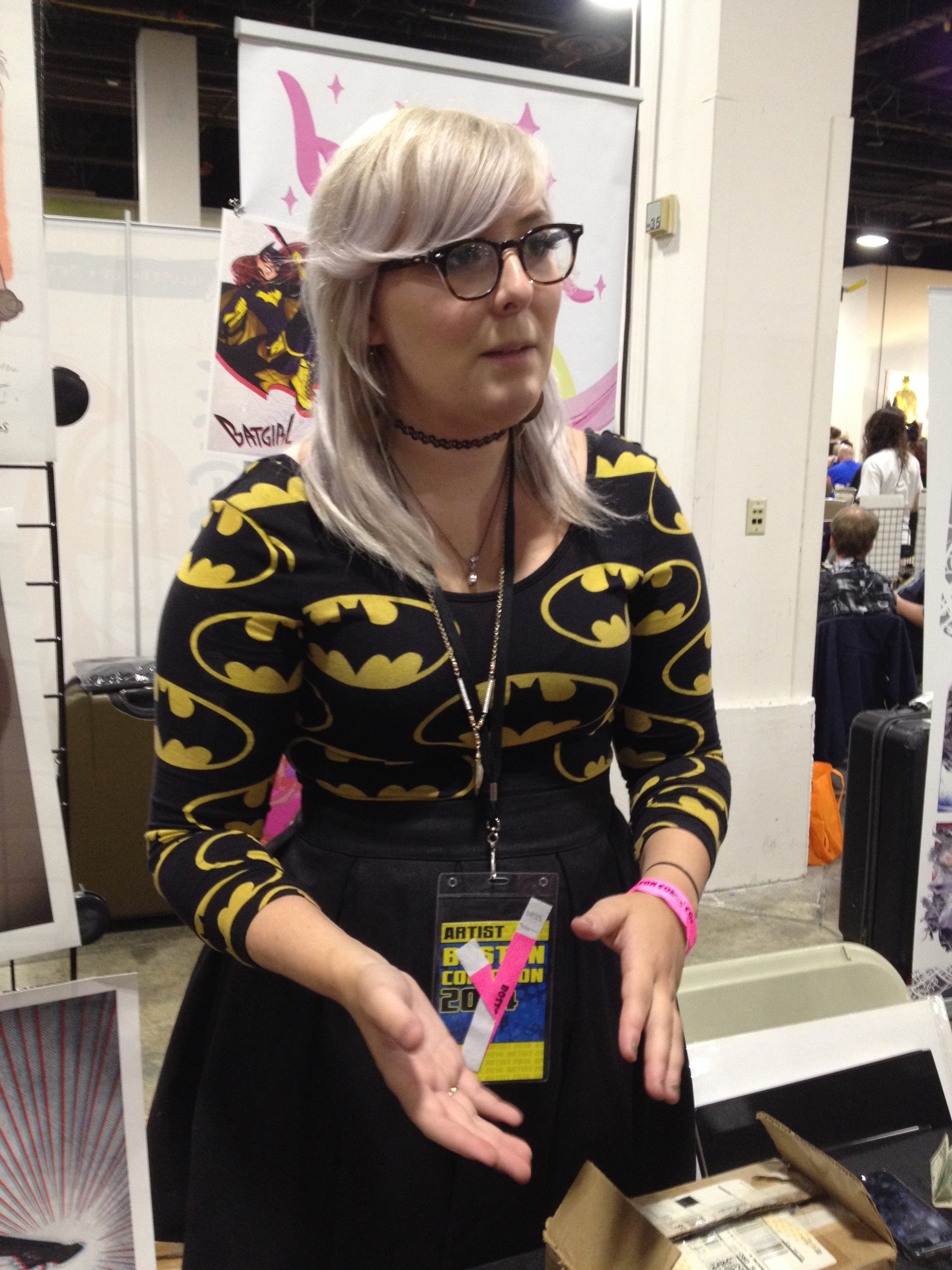 Welcome to the latest installment of my adventures climbing the Cliffs of Insanity. I attended Boston Comic Con last weekend and came away with a few impressions. One is that the audience for comics is growing and becoming more diverse, that meeting creators in person is wonderful but that problems with sexual harassment at cons isn’t dead.

The Groot Test: Trees Are More Interesting Than Women

First, I wanted to talk about Marvel Entertainment’s movies and Guardians of the Galaxy. As I said in my review, it’s a very fun movie but I didn’t love it as much as everyone else did. Since then, I’ve become even more frustrated by Gamora’s role in the film, which is less than Pepper’s role in the Iron Man films, much less than Black Widow’s in Captain America: The Winter Soldier, and Gamora even makes less of an impression than Sif or Jane Foster in the Thor films.

Let’s put it this way: most people are not walking out of Guardians thinking how awesome or intense or scary or dangerous Gamora is.

That wouldn’t be a problem if she wasn’t the only female member of the main crew but since she is, it stands out.

Kelly Sue DeConnick has the sexy lamp test: “If you can remove a female character from your plot and replace her with a sexy lamp and your story still works, you’re a hack.”

If your main female character is so underwritten that that the sentient tree who can say three words has a better character arc, you have a problem.

Combine this with Kevin Feige’s statement that he hopes (hopes? isn’t he the guy in charge of Marvel’s movies?) Marvel will have a female-led movie but, hey, they have a lot of different properties going already, and I’m shaking my head.

And I guess having all of those properties to juggle somehow doesn’t stop Marvel from moving ahead with Inhumans instead of Black Widow or Captain Marvel. Peggy Carter on ABC and Jessica Jones on Netflix, it’s all on your shoulders, apparently.

I guess I should be grateful for crumbs but as I said the last time, I want the whole cake.

Which brings me back to Boston Comic Con

Boston Comic Con on Friday was fun and navigable. But on Saturday, it was over-crowded and jammed and, at times, hard to even walk the aisles on the exhibition floor. Clearly, the con needs a larger venue.

All that crowding allows for harassment. I met a friend of mine there, a fellow Mom, who was cosplaying as Finn from Adventure Time. By the time I met up with her, she’d already been asked a few times to “bend over” so people could see her butt better. She shrugged. I’m appalled.

I give props to the con for having “Cosplay is Not Consent” posted in several places but if any woman was getting groped in that crowd, the offender could melt away and never be caught.

It was with this in mind that I attended a panel. Female creator, yay, major talent and with some diversity as well. All good. And a lot of talk about how things are changing in comics for the better.

Talk that was undercut when the moderator of the panel made what he called a joke to the person responsible for bringing the microphone to those asking questions that he should “pick the prettiest girl.”

I literally facepalmed. Sue from DCWomenKickingAss was sitting next to me. She did the same. And I can guarantee that the women in the audience cringed.

Since I was there, I went up to the moderator afterward and politely (well, I thought I was polite) but firmly told him this was a problem. He said he was teasing the young man with the microphone, wondering if he’d pick the “prettiest girl.” I heard differently. In his defense, he said how much he supported women in comics and he had daughters.

I’ve no reason to doubt his sincerity. He certainly took my criticism without becoming upset and I doubt he’ll ever say it again when moderating a panel

But still….there’s a disconnect there. One statement doesn’t make him a bad guy, but that one statement does add up with all the rest of those statements and leers and being told to bend over to see your butt better.

Men out there, you can’t say you support women in comics and want to end harassment and then say something thoughtless that underscores exactly why there’s a problem.

And speaking of the history of women in comics, I just picked up a blast from the past, the subject of a new segment:

Read of the Week

DC has put out several beautiful hardcovers featuring great Batman artists over the years. I picked up Legends of the Dark Knight: Jim Aparo Vol. 1 at my local comic shop this week.

I should have been writing. I was reading this instead. I’d forgotten how kinetic Aparo’s work was, how he conveyed such a great sense of emotion in his faces, and how he used light and shadow to make the night even creepier and scarier.

Aparo, who passed away in 2005, is probably little known to today’s Batman fans, who if they know of any past great artist, it’s Neal Adams, but he’s severely under-rated. The stories in this volume are all from Bob Haneys’s run on The Brave and The Bold.

This comic was a team-up comic and I have a special fondness for it, as it was one of the very first comics I ever bought off the spinner rack, a team-up between Batman and Ted (Wildcat) Grant. The who’s-who of DC Comics are drawn by Aparo in this book, from Wonder Woman (power-less era), Black Canary, Green Lantern, Green Arrow, the Metal Men, the Phantom Stranger, the Demon, Man-Bat, Metamorpho, and many others.

The action sequences, particularly the fights, are wonderful. I’m especially fond of a ski sequence as a sniper chases Green Arrow, and a story featuring Aquaman hiding a jet airliner under the ocean. No one drew water like Aparo.

As for the stories? They hold up for the most part, but some are clearly dated, especially in their attitude about women.

Robin complains about involving Black Canary in a case because “she’s a girl,” and then Canary enters a feminist lecture and allows “she might have some points.” That was okay, I guess, but earlier in the comic, Canary sits under a hair dryer because the rain got her hair wet. (I was going to pretend she ducked into the hairdressers in order to give Gail Simone the scoop about her next mission.)

Despite that, I highly recommend this collection.

Now I have to go check ebay and see if any of Aparo’s original art is on sale. Perhaps of Black Canary. Not sitting under a hair dryer.

Congratulations to Volkswagen’s Commercial “The Force”

The Cliffs of Insanity: Quitting the NFL?

1 thought on “The Cliffs of Insanity: The Groot Test”