Being adorable is clearly a survival mechanism for babies. Those big eyes and round cheeks compel us to care for them. Their myriad facial expressions, from consternation to glee, let us re-experience the world anew right along with them.

But what are they thinking?

Now we know, thanks to The Man Who Is Not My Mother on Tumblr. There, four-month-old Adeline offers astute observations in surprisingly erudite baby argot. Sort of a Stewie Griffin come to life.

My control and powers expand daily, even as my tactics begin to take their toll.  Each day I grab those infernal rings the man taunts me with, hanging from my many-colored edifice, with more precision. My vocal prowess can kill a bird in the air at 30 paces. My renewed campaign of sleep interruption and deprivation bleeds the man who is not my mother of his vital essence. A pity my mother suffers also; every plan has collateral damage. I wax as they wane. I bide my time. They grow weak as I grow strong.

Want to know more about the man who is not Adeline’s mother? Me too. Turns out he’s Isaac Bloom, an organizer with Greenpeace. The woman who is Adeline’s mother is Monique Sullivan, an organizer for Environment America. Isaac currently works part-time at home in order to care for the baby. Although he lives with a tiny person clearly bent upon world domination, he found time to answer a few questions.

GeekMom: Give us a few details about Adeline, you know, when she was born and how she conveys these astute observations.

Isaac Bloom: Adeline was born October ninth at 4:40 a.m., approximately four hours after I thought it would already be over. As both of my parents have been observing for years, she’s exactly the daughter we deserve. She’s bright and happy and funny a lot of the time and when she’s not, she’s incandescently furious. She sleeps erratically; sometimes quite a bit and sometimes very little, with seemingly little reason. (She’s napping right now, but we’ll see). She’s very friendly to all and sundry, interested in basically everything she comes near and does not want to stop experiencing things to go to sleep. When she doesn’t want to do something, she’s intractable. Incredibly stubborn. Like Wilford Brimley making a very disappointed face and then shrieking. She has a very good yell—not high, but more early ’90s hardcore punk scorched earth-sounding. Anyway, you reap what you sow.

Her observations are largely born of her doing new things or having a new experience. As she’s brand new to the world, lots of what she experiences is brand new, so I just try and think about what that would be like.

GM: Talk a little about the droll “voice” of Adeline. Who are her influences?

IB: Her voice is some mix of David Foster Wallace, David Mitchell in specific parts of Cloud Atlas, Terry Pratchett, Downton Abbey, the character Boyd Crowder from Justified,  Edith Wharton’s House of Mirth, and some of The Remains of the Day. I absolutely love all that Upstairs Downstairs stuff, or landed gentry Old South, the stiff upper lip and the maximalist way of taking the longest possible way to say something, to tiptoe around the edges of things with a love of words; but then the characters that we love the most in those settings are often the ones who are the most blunt, who cut through the dross to call things as they see them.

I was just thinking about how new everything is to her, and if I was in her weird formless little socks what I’d be thinking. I’m not sure why it’s so prim except that I just thought about how much of her experience right now is about things being done to her, rather than by her. She’s pretty defenseless and has exactly zero agency and is upset much of the time. I just sort of thought that her default setting was likely indignant and somewhat shocked, and that she’d be making plans to get out most of the time.

I also just sort of assumed the role of bad guy. I think a lot of new dads experience this, but I remember especially in her first couple months, that I could rock and sway her and change her diaper, but as the person without a milk supply, I was just sort of background noise. When Monique went back to work in January and I took over as her primary caretaker, there was just sort of this palpable sense of, “Oh. Well. This guy. Great.”

We’ve reached a much more pleasant detente since then. Now I know her patterns and naps and what have you, and we’re much more used to each other, even if her tolerance level of being read to from The New York Times is still clearly too low.

GM: What surprises you about having your first child?

IB: I’m sort of surprised by how much I’m willing to curtail my own life to give her structure; like naps, sleeping at home instead of out, etc. I think it’s still less than other folks I know, but more than I would have guessed. I also had no idea about this, but it turns out both of my parents are people themselves, with thoughts and dreams in their own right, and identities that don’t revolve around me. I don’t intend to treat them any differently, but good to know anyway.

Monique and I were also both shocked at how much we both viscerally loved her right off the bat. It’s really striking. We’re also both shocked that we were allowed to just take her home from the hospital unsupervised. Someone came and did a house visit at least before we adopted a dog.

GM: Some thoughts on helping others see the world from an infant’s point of view?

IB: Every time I’m thinking that I’m going to give Adeline away to the first circus that passes by, in the second hour of the third try at naptime or whatever, it’s really helpful to just remember that she’s reacting to her own feelings and surroundings and lacks any communication skills or ability. Everything is new and everything is sort of terrifying.

Like, going to sleep. Dear God, literally a sense that they might just cease to be! They have no idea that they’re going to wake up. So, anyway, it’s all new, it’s all kind of scary, and whatever you can do to help out, just do that. Also, don’t be afraid to just put them down and walk away and compose yourself for a second. You being really tense and upset is not going to help them, and they’re already crying. You’re going to need to get it together for both of you. 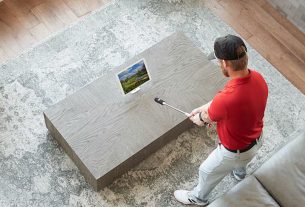