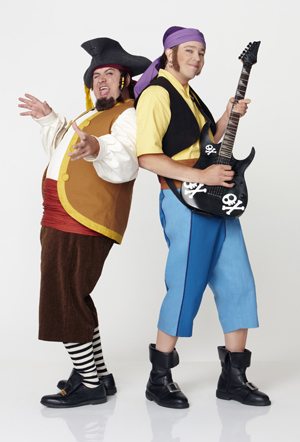 It’s important for all of ye landlubbers out there to know that “pirate rock” is a very real thing. Aye, ’tis true. In fact, this style of music is a major part of Disney’s animated hit Jake and the Never Land Pirates, thanks to resident pirate rockers Loren Hoskins and Kevin Hendrickson.

The duo is probably best known to fans as Sharky and Bones, two of the show’s animated characters—in more ways than one. See, Hoskins and Hendrickson are featured both in cartoon and live-action form in every single episode. They also provide all of the music for the show, including Season Three’s newly revamped theme song.

However, these two swashbucklers are actually seasoned pirate rockers, having formed the Portland, Oregon-based pirate rock band Captain Bogg & Salty back in 1999. After releasing four albums with that band, Disney recruited the duo to make pirate music for the series. It’s since become a full-time job for the two, and has yielded enough booty to fill the Jake and the Never Land Pirates soundtrack.

Recently, I got the chance to talk to the dynamic duo. Avast, me hearties and heed what they say about the show, the music, and some of the treasures hidden in Season 3.

GeekMom: Can you please explain the pirate rock genre?

Loren Hoskins: No—I mean, yes I can! Kevin and I, when we started making pirate rock in the late 1800s, we kind of based it on: “What if you gave the characters in Pirates of the Caribbean the ride electric guitars and amps and microphones? What kinds of songs would they sing?” So, it kind of built from there. It’s fusing a lot of the fun of rock, kind of Kinks-style rock or different rock genres, kind of garage-y at times, but mixing it with the literary tradition of Treasure Island and all of the swashbuckling adventure and storytelling that comes along with that.

GM: Are people surprised to hear that the band has been around for so long?

Kevin Hendrickson: Yeah. We haven’t had a lot of opportunity to tell people that and witness the surprise of it, but definitely. People are surprised that we’ve done this type of music for so long—specifically, pirate music.

GM: Do you still play live?

KH: We’ve done some performances as Sharky and Bones live. As recently as last summer, we performed in Central Park. The summer before that, we performed at Disney World, at Downtown Disney for a 10-day run. It comes sporadically, but we do have a good time doing that.

GM: Do you foresee a national tour? I know it’s not Disney, but I recently took my son to Yo Gabba Gabba! Live! and it was a blast. Will there be anything like that?

LH: There is a tour right now that is called Disney Junior Live On Tour! Pirate & Princess Adventure. The second half of that show is all Jake, and it features a lot of the music from the show, with all of the great stage crafts, characters, costumes, stage magic, and all that stuff. We’re not in that show, but it was a real treat to go and watch it and see us up there, but not be us. Like, to have the characters come to life like that was really amazing.

But we’re just so busy keeping up with the stories and all of the cool, new twists and characters that are coming out for the show… and then, there’s a new re-branding. They’ve given us license to rock out even more and kind of up the swashbuckling angle. It’s been pretty exciting.

KH: The live-action Sharky and Bones that are in the Disney Junior Live show are fantastic, by the way.

GM: Can you explain a little of the musical process for each episode? For instance, for the three-part episode that’s coming up this Friday; do they hand you a bunch of scripts and ask you to come up with songs?

KH: Yes they do. They give us scripts and then Loren and I work together to create the songs well in advance of receiving the animation.

GM: About how long does it take to come up with an episode’s worth of songs?

LH: It depends on the episode, but what’s funny is that we’re often working the beginnings of one script and the ends of another at the same time. It’s hard to know exactly, but Kevin and I kind of have a ping-pong approach where we’ll pass ideas back and forth. And then, we finally go: “That’s it, we’ve got it, this is it.” Sometimes that snaps together in one day, sometimes it takes a week or two. It just depends on the song and how we want to bend it to the story.

KH: As far as finishing the music, composing and putting together a whole episode usually takes about a week.

GM: Why did the show’s theme song change this season?

LH: We just wanted to up the energy a little bit, make it a little more kinetic.

KH: It was a way to make the third season a little special, too. We were getting a lot more scripts that had big adventure moments in them and they were kind of starting to add a little more Pirates of the Caribbean to the scripts or something, so they wanted us to respond to that with some more energetic music—add a little more rock to it.

GM: What music are you both listening to right now?

LH: I like The Black Keys a lot, as far as a modern band. I also love listening to the old Disneyland records. I love the old stuff, the old children’s stories and song records. They’re a great wellspring of ideas and just remembering what it’s like to play. So I’ll often put the old Disneyland record of 20,000 Leagues Under the Sea or something like that—not to really be thinking about pirates, but just thinking about adventure music.

KH: I tend to listen to older, 1980s new wave like XTC or Oingo Boingo.

GM: How much of your pirate wardrobe is from your actual wardrobe?

A special extended episode of Jake and the Never Land Pirates will air this Friday, February 28 at 8:30 a.m. (ET/PT) during the Disney Junior block on the Disney Channel. A new music video for “Lead the Way Jake” will follow on Saturday, March 1.

GeekMom Will Be at Maker Faire This Weekend!