Ecology gets a space-adventure for young adults in a new book by K.H. Brower.  Green Tara: A Bosque Family Adventure

is set in a future where Earth can no longer sustain life; colonists have gone off to live without our beloved planet.

However, there is one family, the Bosques, that had a plan long ago to someday renew the Earth. Fast-forward several generations to the main character of the novel, Virginia Bosque: a teenage girl living on a large space-ship with an emotionally distant father, a furry pet robot, and a cousin named Gordy. Her mother disappeared when she was five, and Dot (the furry pet robot) is her only link, since her mother designed and programmed it. Gordy’s mother is also gone. Life on the ship is strict due to the Triumverate, a corporate controlled government that rules the humans still around the universe. Virginia’s only goal in life is to fly freely in her Blast- a small spaceship she is still too young to pilot on her own.

Purely by accident, Virginia and Gordy discover details about their missing mothers, and the Bosque family mission to bring life back to Earth. They set off on an adventure to a secret planet called Tara where humans have been nurturing Earth plants and animals. They find Virginia’s mother, but it is not the loving reunion Virginia always hoped for. In fact, nothing is what Virginia hoped for. She is thrust into a role she was unprepared for, with parents who were never there for her, physically or emotionally. Written in first person, our heroine thinks Gordy and Dot are the only ones who seem to really care about her. She is overwhelmed with dealing with family issues, let alone saving Earth! But she has courage and hope.

The ecological message is there, but never forced beyond what is necessary for the plot, which I really appreciated. However, except for the lush vegetation described on Tara, the book lacked much in the way of description. I often found myself struggling to envision the physical sci-fi world Virginia was a part of, including the characters. I looked up later that this book was originally a script, which explains a lot. However, Virginia’s thoughts and emotions are well written and bring depth to the book that would otherwise just be a fun action novel. Gordy and Virginia are well-rounded characters, and I hope we get a story from Gordy’s point of view next.

Does Virginia help her family’s mission to restore life on Earth? Join a band of space-pirates (that is an option!)? Or figure out how to return to her previous life under the Triumverate? I won’t give away any more of the plot here, but Green Tara is full of action and emotion for ages nine and up.

Geekmom received a copy of the book for review purposes. 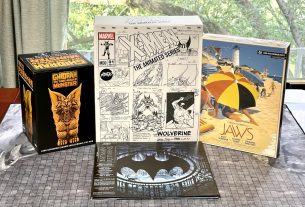 GeekDad: ‘Tis the Season for Geeky Holiday Gifts From Mondo

How Gene Roddenberry Changed My Life