The robot revolution is upon us. Whether you want an R2-D2, Dalek,or a Bender is up to your own discretion. However, Romo is an easy, family-friendly way to introduce some of the wee ones to the wonderful world of robots.

Romo is a smartphone-controlled personal robot, which can be found at Brookstone and Amazon. He can’t clean the floors or make fries. Romo is more like a family pet, with none of the mess. He’s also a nifty learning experience, both for the robot and its user.

On the surface, Romo seems a lot like your basic smartphone-based toy. However, as you play with Romo, he’s actually learning. In other words, while it may seem like you’re just playing a few simple games, you’re actually programming. This is called the “training” phase. Romo also has telepresense features. This means you can talk to family members through Romo, whether you’re on the other side of the house or the other side of the world.

The actual Romo product is just the robot’s base. No batteries are necessary, as it charges up via an included USB cable. However, to make magic with Romo, you’ll have to supply an iPhone or iPod touch. Currently, there are two versions of the Romo: one is compatible with the fourth-gen iPod touch, the iPhone 4 and 4s, while the other works with the fifth-gen iPod touch and the iPhone 5/5C/5S. For testing purposes, I used my trusty iPhone 4.

If you don’t want Romo to suck up all of your iPhone’s battery life, you’ll want to charge it via the aforementioned USB cable. As the base charges, a light will flash on the front. It can take about six hours to get Romo fully charged. Once it’s ready to roam, that light will turn solid and you can expect about 2.5 hours of playtime. While you’re waiting for the device to power up, download and install the free Romo app via the iTunes App Store.

Once everything is ready, secure your iPhone into Romo’s docking station and launch the app. After a little introductory “movie,” you’ll be asked to help Romo train for “his time here on Earth.” This is where the playing/programming comes in, as well as where Romo will start to adapt to all of your surroundings.

Parent company Romotive has said that one of the goals with Romo is to help get kids excited about computer science and software development. Well, mission accomplished. As Romo learned and unlocked features, my 7-year-old son fell in love even more with the little guy he named “Rover.”

At present, Romo has about 12 different “missions,” which can unlock new abilities. These missions vary from getting Romo to react to being picked up to getting the robot to chase a ball. There are options for sound, motion, and even “expressions.” Although the number of missions seems low, each one can take time—which my son certainly didn’t seem to mind one bit!

Of course, Romo isn’t all fun, games, and wacky faces. He can also be used as a security device, which is pretty darn cool. If you’re willing to leave your iDevice docked in Romo while away, you can view your home using the iPhone’s camera. Of course, this does require another iOS device or a computer for the viewing. However, you can also use that second device to control Romo remotely. So not only can you see whether or not the dog is sitting on the couch, you can actually follow Fido around the house to make sure he isn’t eating any shoes or Lego bricks.

As mentioned, you’re going to need two devices to use those features, which may not be doable for a lot of families. And if you think you finally have a use for that old iPhone, think again. See, Romo is sort of fussy about who he plays with. That’s a nice way of me saying that he’s not going to work with your next smartphone, unless you like getting the same old operating system. There’s an iPhone 4/4s Romo and one for the iPhone 5 and the two don’t play nicely with each other. If you want to keep Romo in your rotation, you can expect to spend $149.99 for the upgrade.

It’s also important to note that the telepresence doesn’t work with the iPhone 4. This kept me from checking out those features during my review. It’s something I didn’t notice in the fine print before I agreed to take Romo into my home, so it may be something you’ll miss.

That slight difference could definitely sway your decision. See, Romo is sort of expensive. For $150, I want something to clean my floors. Well, at the very least, I want it to work with my next iPhone. However, Romotive is working on fixes, upgrades, and additional features for the New Year.

When you factor in the security features, Romo is absolutely worth the money. A basic Dropcam video camera has the same MSRP and doesn’t move around the house or teach the kids about the basics of robots and programming. If you’re still clinging to the iPhone 4, the price tag may be a bit more difficult to accept. Still, there’s no arguing with the fact that Romo was insanely popular in this house. My son always lit up at the mere mention of hanging out with “Rover” for the day. His reactions were even better than the ones we programmed into our Romo. 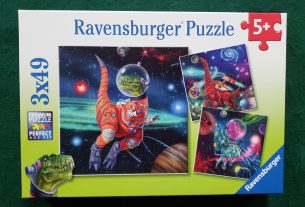 Building Puzzle Skills With ‘Dinosaurs in Space’ from Ravensburger

A Race With Prosthetics at the London Olympics

1 thought on “Getting to Know Romo The iPhone Robot”