Everyone’s favorite Christmas movie (if it’s not at least in your Top Five, I don’t think we can be friends anymore) is now over a decade old. And it turns out, the gloriously convoluted story of Londoners in love packs some serious geeky street cred. Before and after Love Actually, several members of the cast made their mark in some pretty big movies and TV shows. Here’s a catalog of their greatest hits (and this isn’t even including the various guest appearances on Doctor Who).

Let’s start with an obvious one. Lovesick Mark, with his cue cards and unrequited love, went on to become:

Sheriff Rick Grimes, the often-infuriating hero of The Walking Dead. 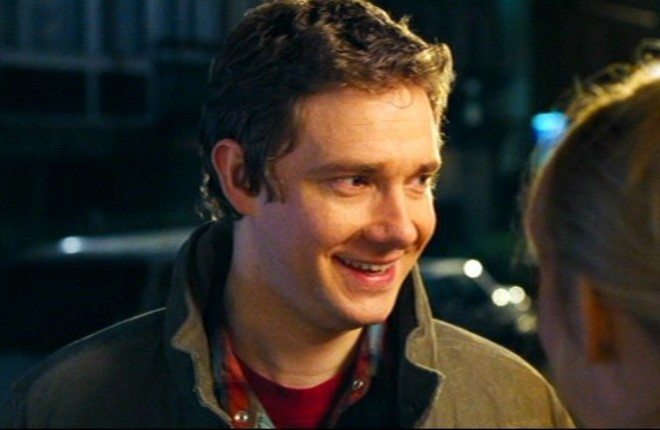 Jack the naked stand-in went on to do all kinds of things. The Hitchhiker’s Guide to the Galaxy, Sherlock, The Hobbit. Martin Freeman is basically a geek god.

It’s hard to imagine a finer Bill Nighy performance than that of rock and roll legend Billy Mack. It’s the role that made him famous in the United States. That same year he played Viktor in Underworld, and after that he added the Pirates of the Caribbean and Harry Potter series to his resume.

Liam Neeson has got the movie franchise thing down, before and after he played heartbroken widower Daniel. Star Wars, Batman, The Chronicles of Narnia. Not a bad resume at all.

Lovesick Sam was so adorable and precocious in 2003. And now he plays these two:

He played newlywed Peter. And then he tried to hunt down Mal and the gang in Serenity.

Keira Knightley played newlywed Juliet the same year that the Pirates of the Caribbean series launched. And she also took some time to satisfy the lit geek in all of us when she played Elizabeth Bennet.

Sweet, sweet Jeannie from Wisconsin. Deadly Emma Frost in X-Men: First Class. Plus that Betty Draper role we hear so much about.

You might now point out that Colin Firth hasn’t really made a name for himself in sci-fi or fantasy. But he was Mr. Darcy, the original Mr. Darcy. That is all he needs to be to get on this list.

The little girl who blew our minds with her version of “All I Want for Christmas Is You” now does the voices of Vanessa Doofenshmirtz on Phineas and Ferb and Marceline the Vampire Queen on Adventure Time.

She played Carol-Anne from Wisconsin. She was also on 24 for nine seasons.

Poor Karl and Sarah’s romance was doomed. Just like that whole Nikki and Paolo thing on Lost.