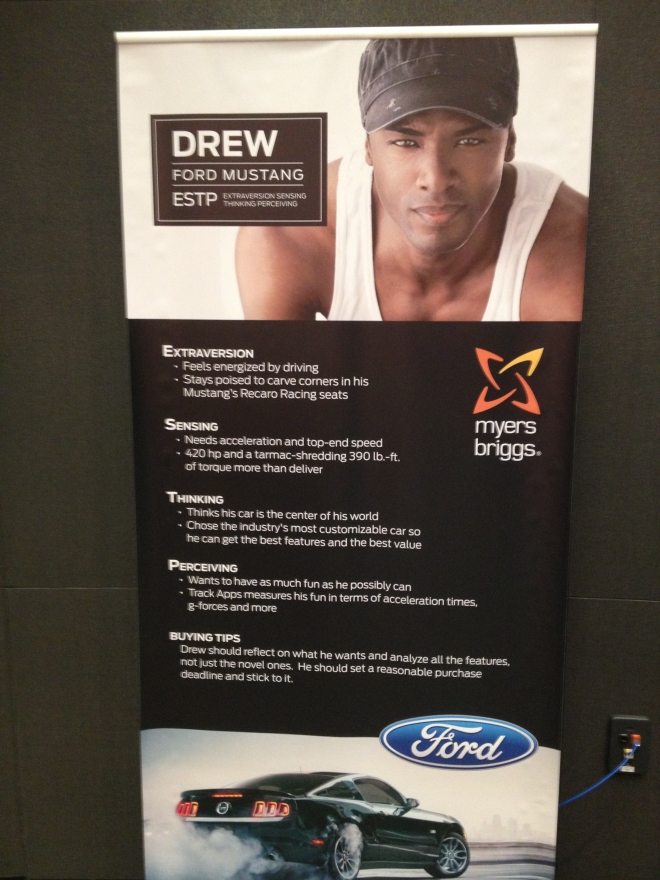 It’s a brave new technological world but not entirely set, especially for something as ubiquitous as motor vehicles. The cars of the future will be safer and more gadget-filled. But they could also cause drivers to be more distracted. Tomorrow’s cars could be fully electric. But only if technology catches up with economics.

And conventional wisdom to the contrary, the Ford F-150 pick-up truck is the world’s best-selling vehicle. (At least, that’s what a Ford spokesperson said, though this article on the Ford website places it third. It did enjoy a 17-year run as sales king.)

I learned all this at the Go Further with Ford Trend Conference that took place from June 24-26. It was an invitation-only event in which Ford Motor Company paid for travel and hotel expenses to present their vehicles and their company philosophy to press, and environmental, technology, and parenting bloggers. Given the logistics of arranging the event, I expected it to be focused heavily on “Ford is awesome,” but this was not the case.

Ford Executive Chairman Bill Ford and Ford President and CEO Alan Mulally did reveal their vision for the company’s future, which is to use their vehicles to enable consumers to go wherever they need to go but the events of the next two days were anything but a hard sell. Instead, the conference included a day of panel discussion not only exploring the future of cars but of businesses in general, and about how technology and environmental concerns affect these business decisions.

Consumers want to use our tech in cars. We want to be able to plug in our smart phones, tablets, etc. and have those things available in our vehicles. But this increases distraction, an issue for drivers even with wireless hookups and hands-free solutions.

Sherry Turkle of MIT, who was part of the “Returning To Your Senses,” panel went even further than being concerned about distracted driving. She talked about how the constant use of smartphones and tablets can interrupt the development of overall critical thinking skills. As an example, she said her studies have shown recent college students lack the ability to take proper notes; that is synthesize a large amount of information and reduce it to its essence of what they need to learn. She was even critical of educational apps.

Apple co-founder Steve Wozniak, part of the “Disrupting the Drive” panel, was completely in the opposite direction, as he wanted a car that was part of an overall system that turned the computer into a sort of interactive “buddy.” (This sounded much like Jarvis in the Iron Man movies.)  This would mean a car that could sense that its driver was going to work that day, check traffic and weather reports, and determine the quickest route, all on its own.

Wozniak was enthusiastic and geeky at the same time, even showing some of us how “cool” it was that the iPhone’s camera can be used without unlocking the phone, allowing quick access to snap a candid photo. To him, technology is the way to go.

The call of technology and its drawbacks clash most inside the car. .

Ford uses the “Sync” system inside the car which responds to voice commands (much like the iPhone’s Siri) and is continually updating and refining it. I have Sync in my 2009 Mercury Milan and it’s hands free. But I still get distracted using it and definitely won’t let my eldest son—currently learning to drive—use it at all.

Yet technology is also being used to make driving safer. When I drove the 2013 Ford Fiesta, one of the tests was backing up to hit a soccer ball approximately the same size of the little sedan, using a live feed from rear cameras that displayed on a screen next to the steering wheel.

The live feed allows the driver to back-up without ever looking behind them and there are proximity sensors as well to prevent hitting anything. During the driving test, I pushed the speed of backing up too much, ignored the proximity sensor and then smooshed one of the orange cones. Oops. Obviously, it’s not a completely fool-proof system; it needs a driver willing to pay attention.

2. Engineering May Save Us or, at Least, the Economy.

For those inclined to the sciences or math, an engineering degree is the way to go. Wozniak went so far as to say that engineers are the only people who can change the world and Jim Buczkowski, Director of Ford Electronics and Electrical Systems Engineering, agreed with him. Engineers, they said, are the ones that figure out how to practically apply knowledge.

Far be it for me to argue with the Woz. At the very least, it seems that an engineering degree may be one of the most surefire ways to find employment in the near future. Part of our tour of the Ford Facility featured the 3D printing division. Ed Everidge, the Master Fabricator for the division, said that they cannot fill engineering jobs fast enough. That includes software engineers and, well, he said, engineers in all fields.

I can’t help gushing about this because it was the first time I’ve seen 3D printing in action. Ford had several machines, ranging from the size of a walk-in closet to the size of an old office-style Xerox machine, and some table-top portable models from a subcontractor on display. As a demonstration, there was a team printing a rook for a chess set with the tabletop printer. The exterior had already finished and the machine was busy printing steps that went inside the rook.

The crowning display in the 3D section was a full-scale model of a car, all 3D printed save for the tires and wheels. Ford has been extensively using 3D printing since 1998 and has been using it as far back as 1988. The Ford employees giving the tour said what used to take weeks now takes only hours or a few days. The printing is used to develop concepts for vehicles, very early in the design process.

4.  Electric vehicles may require a new style of driving.

Ford brought us out to a test track  to give us a chance to use their Ford Focus electric car. I’d never driven an all-electric car, so I was curious as to how the experienced differed. The answer was it handled the same as any gas-powered vehicle with the only noticeable change being how quiet it is.

It does, however, have some unique properties. The electric Focus is equipped with a Regenerative Braking System. That means the system recaptures more than 90 percent of the energy normally lost through friction brakes and recycles it to recharge the battery.

This requires using those brakes in an efficient manner so they recharge to the fullest possible extent. The most efficient stops are ones where the driver can slow down and ease into a stop. On the test track, this was easy. I scored 100 percent several times, meaning I sent all that energy back into the battery.

Would this translate to real-world driving? Like say, where I used to drive in northern New Jersey? Driving carefully and planning one’s stops is not always an option. Following the most efficient method to allow the brakes to recharge the battery might just get a driver sworn at or worse.

Overall, the conference convinced me that Ford has a specific plan for innovation, especially in electric vehicles, and with adding technology to make cars safer and more interactive. Mulally phrased it as considering the car almost a “mobile app.”

But the conference also taught me that solutions to our reliance on oil and gasoline car engines are not simple.  For example, right now, the size of batteries keeps the price of all-electric vehicles out of the range of many consumers. Technology hasn’t quite caught up to desire.

And some solutions aren’t completely within the control of any car company. All-electric vehicles would make cars far more dependent on our national electric grid, which badly needs updating. What happens if people own only electric cars and an overall power outage due to a natural disaster prevents power from being restored for a length of time? It can also be difficult to find gasoline during a natural disaster to keep cars running, but I can go about 300 miles on a tank of gas and the electric Ford Focus vehicle I drove can only go about 110 miles, under optimal conditions.

Would I buy a Ford myself? I own two Ford vehicles right now, a 2007 Focus and the 2009 Milan and I’ve been very pleased with them but part of the reason I own them I have a family member working at a Ford dealership and I rely on his expertise. But my dream car is a Ford, a Mustang, which apparently fits my personality type, as that was the car a Myers-Briggs personality test sponsored by Ford matched to me.

Unfortunately, it was only a suggestion and not an actual car. Hah. One day.

The Ford conference also took me into Detroit, showing the contrast between the Ford Motor Company facility and the city. But that’s for the next article.

Music is the Meta-Game

30 Years Ago, My City Wasn’t Nuked