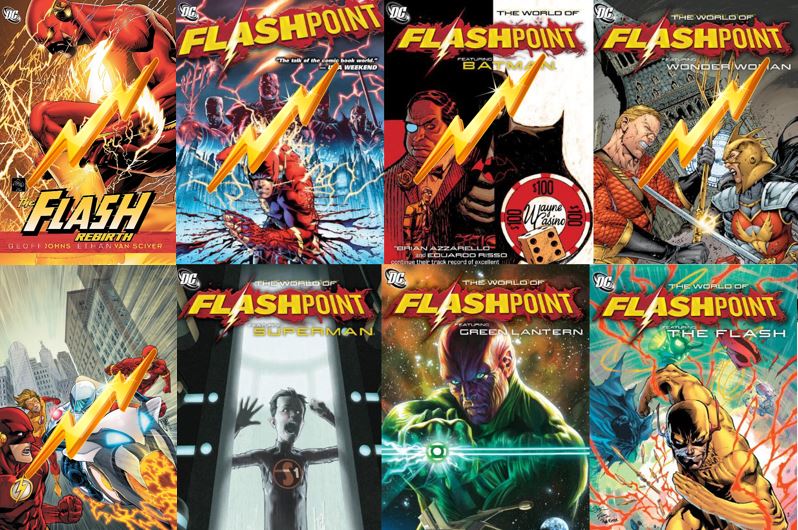 Welcome to week five of Flashpoint! This week, I’m looking at Flashpoint: The World of Flashpoint – Featuring Superman, written by Lowell A. Francis and Scott Snyder. This graphic novel takes us a little deeper into what Superman gets up to while war breaks out across Earth. We also check in with a few other famous DC faces, including: Booster Gold, Traci Thirteen, Jason Todd, and Guy Gardner. On a frustrating note, Lois Lane once again gets cheated out of any meaningful face time, but by this point, I think I’m getting used to it.

When we finally do see Lois take on some action, she dies! Sigh. Again with the cliché of using a lover’s death to push the hero into action (I believe the Flashpoint tally for this behavior now stands at three). This poor woman just can’t catch a break. Hopefully, one day again she will get another writer that respects her character and plays with the idea that Lois Lane is a strong, independent woman, as in the Man of Steel movie and as in previous recent comic incarnations by Mark Waid and Kurt Busiek.

Actually, it can be argued that both Superman and Lois are severely underused in these stories—most of this arc is about Lieutenant Neil Sinclair and his transformation into the meta-human, Project Zero. That’s right, this is a Superman story that isn’t really about Superman! Project Zero is a rejected military science experiment. The only “successful” part of the project was turning a perfectly normal military lieutenant into a murdering psychopath. So there’s that.

Skipping ahead, Traci 13, daughter to the magically-enamored Clarence Thirteen, has three issues of her own in which she tries to stop her father from blowing up the world. Traci’s tale is interesting to read because of who she partners with on her mission, but her story doesn’t really have much to do with what is happening with Flash or Flashpoint. Instead, it give us a look at what other famous DC characters were doing while the war was going on.

It was entertaining to see where heroes like Batman’s second Robin, Jason Todd (brutally murdered by the Joker in Batman: Death of the Family, though later brought back to life as the anti-hero Red Hood) and Green Lantern Guy Gardner ended up after the world was turned upside down by Flashpoint. Jason Todd seriously deviates from his anti-hero Red Hood persona by becoming the minister of a church while Guy Gardner changes from being a raging maniac to a Buddhist barkeep Down Under.

Since we’re dealing with time travel, it only makes sense that DC’s most famous time traveler gets a turn in the spotlight.

Booster Gold is one of my favorite heroes, and this is one of the few tie-ins that I bought individual issues of during Flashpoint. I regret that at the last-minute I took Time Masters: Vanishing Point off the Flashpoint reading list, because quite frankly, these three issues won’t make much sense without it.

Written and drawn by Dan Jurgens, we get to see Booster at his best, fighting off Doomsday, and having no one around to give him flack for his “celebrity” life. It was nice to see him cut loose and do the right thing without anyone around to cut him down. He proved himself quite the hero and I look forward to seeing more of him in the New 52.

Even if some of the writing wasn’t what I had hoped, the art of Flashpoint: The World of Flashpoint – Featuring Superman was flawless. What’s more, unlike The World of Flashpoint: Featuring Wonder Woman, there wasn’t any gruesome art to overcome. It’s amazing how a little less bloodshed (and decapitation) can make such a difference in the reading experience. The art alone felt cleaner and didn’t make me feel like I was watching a blood bath with some words thrown on the page. In addition, it was also easier to pay attention to the page I was on versus trying to continue reading while still being distracted by a grotesque scene two pages back.

Overall, these stories were all important to read in terms of knowing what was going on in Flashpoint, even if some were a little hard to get through. Come back next week, when I check out Flashpoint: The World of Flashpoint – Featuring The Green Lantern.