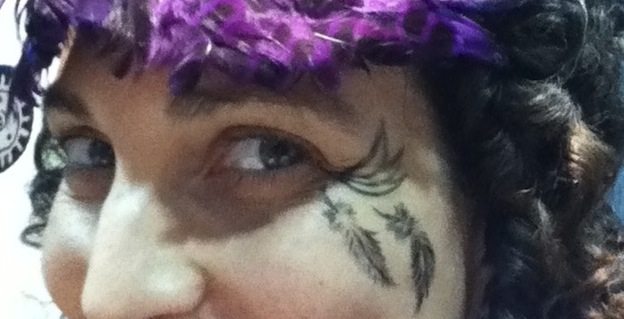 ConnectiCon is such a visual treat. As Corrina mentioned in her post, the cosplay is fantastic, usually homemade, and enough to keep you entertained if you just sit and watch the crowd. I kept my giggles in check on the elevators in the hotel because they were always filled with random cosplayers having banal conversations.

Zombie: Have you tried any of the hotel restaurants?
Power Ranger: Not yet.
Wonder Woman: The one near the front desk is pretty good.
Zombie: Thanks.

Here is a family from The Legend of Korra.

But there’s so much to do! I’ve written about this con in the past, but this year I did something I’ve always wanted to do: play a long RPG. In previous years, I did performances and panels, which made it hard to commit to anything that took up a huge chunk of the day. But this time, I was there to help my daughter at artist alley, make sure my son was busy, and enjoy myself. Part of the fun was getting to talk with some of the guests. I kept exclaiming in delight while reading Jim Cummings’s bio. I had no idea he was the voice of so many characters! And a delight in person. I did not have a chance to see Marina Sirtis, but several friends did and filled me in with how cool she is.

I played Caravan on Friday and after four hours the group was in a walled, rat plague infested desert city surrounded by a tribe of gnolls, and huddled in a ziggurat where we just found a giant spider. Of course I had to go back on Saturday and figure out how to get out of that mess! Lots o’ fun.

I spent time with my daughter selling her art and eye swirls, chatting with our neighbors: False Mind, Purple Lantern, and Grinning Narwhal. Rayna of Purple Lantern did a great commission of my current RPG character from a home game: Guy McNorm of the Clan McMahan.

I also met up with friends I only see at this convention, juggled, danced, danced, and danced some more (with glow sticks!) A nod to the first DJ of Friday night who really kicked off the party. ‘Til next year!

‘Ultimate Slime’ Is The Ultimate Book for Slime Makers