Happy Comic Release Day! Welcome to another installment of GeekMom Comic Book Corner, where we recap our adventures in comics for the week, including a look at a new (old) collection sword & sorcery collection from Chris Claremont and artist John Bolton, adventures with dinosaurs, and the return of the fabulous Killjoys.

Corrina — Marada The She-Wolf by Chris Claremont and John Bolton

Way back in the 1980s, there was a magazine called Epic Illustrated, a haven in which well-known Marvel creators published adult-oriented work. The magazine lasted only 34 issues but featured heavy hitters in writing and art and is fondly remembered.

Marada the She-Wolf was among the most gorgeous of the Epic series. The swordswoman was loosely modeled on Red Sonja, but her adventures took place in ancient Rome or, more accurately, a fantasy version of ancient Rome. If this is sounding a bit like Xena, there’s another parallel. Marada shared adventures with her friend, the Princess Arianrhod.

Titan Comics has announced a hardcover collection, the first for these 1980s stories, due out on November 12. It will feature fully restored artwork by Bolton as well as never-before-seen art and sketches. The book will also be available the same day digital via Comixology. I’m marking that date in pen on my calendar as Claremont at the top of his game is always worth a look and art that good shouldn’t be missed. The cost, $24.99, is very reasonable. 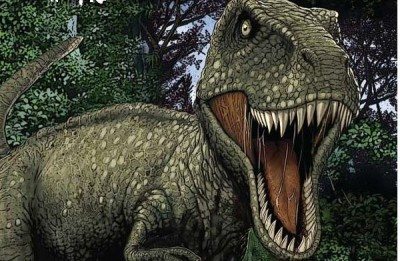 The book introduces readers to ten different prehistoric species, including avian pterosaurs, carnivores like the brutal allosaurus, and herbivores like armored ankylosaurus. Along the way, readers will learn about the creative lengths the young allosaurus could go in order to catch its prey, while also answering pressing questions like, “Who is left babysitting when velociraptor packs go hunting for dinner?”

Despite art that is at times graphic, this is a book is for most ages—though younger children might find some of the dinosaurs are a little too alarming. Head over to Amazon and look inside the book before buying it if you’re unsure of its appropriateness for your aspiring paleontologist.

My seven-year-old son checked Dinosaurs and Predators out with me and this is what he had to say: “I can tell you right now that this is scary. The dinosaurs fighting and the part about a dinosaur that’s eating another dinosaur is very scary.”

Dinosaurs and Prehistoric Predators is a Discovery Channel graphic novel, published by Silver Dragon books, an all-ages imprint of Zenescope.

I was given a review sample to use for this post.

Sophie Brown — The True Lives of The Fabulous Killjoys
“Once upon a time there was a little girl much beloved by a team of heroes called the Killjoys. They swore to protect her. And then a bloody battle broke out between the evil empire of Battery City and these rebels of the Desert. The Killjoys died. The girl lived.”

It has been a long wait for those of us keen to read Gerard Way’s much-anticipated return to comics, but last Wednesday, issue #1 of the six-part mini-series The True Lives of The Fabulous Killjoys finally hit shelves. The comic is set 12 years after the events of the Danger Days album by My Chemical Romance, 12 years since the Killjoys themselves died at the hands of B.L.I. Issue #1 introduces us to the Killjoys’ universe, showing us how those outside Battery City are getting by and feeding us a little more information on the draculoids and scarecrows introduced in the My Chemical Romance music videos.

We follow the girl as she meets up with others in the Desert; those familiar with the Killjoys will recognize some familiar names like Dr Death-Defying, and new characters keep to the unusual naming conventions with Chow Mein and DJ Cherri Cola being introduced in the first few panels. We also catch some glimpses of life inside Battery City, and of the repercussions of not obeying the rules for those who live there.

The comic has a slightly anarchic feel, as if the book itself belongs in the Killjoy’s world, rebels scribbling down a visual record of the events in their lives. The colors are vibrant, almost gaudy, and the language fits in perfectly with a vision of post-apocalyptic California—a strange mix of technological jargon mixed with an almost Cockney-gangster style slang and punctuated in such a way that it often reads as song lyrics. If you’re a My Chemical Romance fan then this is a must-read, it completes the Danger Days story and will hopefully explain much of what we saw in the “Na Na Na” and “Sing” music videos back in 2011. If you’re new to the Killjoys, then #1 serves as a great introduction (although I’d still recommend watching those videos if you want the complete back story).

If you want something totally different to read this year then give this a shot. Killjoys… make some noise.