Happy Comic Release Day! Welcome to another installment of GeekMom Comic Book Corner, where we recap our adventures in comics for the week. This week, I look at Green Lantern #20 and Kelly gives us a look at the new, all-female-cast, X-men series.

Green Lantern #21 (2011-) is the first Green Lantern issue without longtime writer Geoff Johns’ touch. I was worried about how well I would enjoy the series now that he’s gone. It’s still going to take another couple of issues for me to really get settled in, but I think the new writer, Robert Venditti, is definitely on the right track.

If you’ll recall, at #20’s  close we were left reading about the futures of all our favorite characters. However, there was still a great deal of intervening history that had hitherto gone untold.

Since all but two of the old Guardians were killed after their attempt to eradicate the Lantern Corps (for more on that, see Green Lantern: Rise of the Third Army), the old Guardians have been replaced by new members…for now. The action begins when our hero Hal Jordon, mid-conversation with on-off girlfriend Carol Ferris, is summoned to the Green Lantern home planet of Oa by these new Guardians for a briefing.

Kyle Rayner, a former Green Lantern (see Green Lantern: New Guardians #17) makes a guest appearance here as the White Lantern, and when the Guardians make Hal the leader of the Corps, he has a list of reasons why he doesn’t agree with their decision-making. This leads to a fun bit of comedy-relief. The Guardians have some good reasons for their decision, though, and leave Hal Jordan to take care of things while they venture off to learn more about the universe they are now tasked with governing.

As Kyle points out, Hal was instrumental in causing a few of the conflicts the Green Lanterns have encountered over the years, so putting Hal in charge seems akin to asking for trouble. As someone who has a hard time following orders, it will be interesting to see how Hal handles things now as a leader. After all, it would be understandable if some of the people now under his command occasionally reminded Hal that he hasn’t exactly been known for following the rules himself.

So, Hal has his work cut out for him as he enters into his first item of business: rebuilding both the corps and the home world.

Moments after Hal releases the rings from their chambers to search the universe for new recruits, avaricious Orange Lantern (aka LarFleeze) strikes, his only goal to steal everything and anything. Meanwhile, the new recruits arrive and they look like little more than teenagers (if that). It’s almost as though the rings set up a recruitment station on the grounds of an alien daycare.

All of the Green Lanterns that I know of were well into adulthood when they were unwillingly recruited into the Corps. Since the rings only select those with a great will to wear them, I’m curious to know what stuff these young recruits are made of…what made them more preferable candidates to someone older with more experience?

It’ll be interesting to see what kind of Lanterns these kids make–that is, if they live long enough after the ensuing battle to get any training. DC doesn’t exactly have a stellar survival record with its youngest characters  (for more on this, see the recent deaths of Damian Wayne and Cliff, the teenage son of Animal Man).

X-Men #1, written by Brian Wood with art by Oliver Coipel, kicked off in May with a strong start – the top selling comic book for the month. As you’ve probably heard by now, the ongoing series features an all-female lineup with longtime favorite X-Men like Storm (back with the mohawk!), Rogue, Jubilee, Kitty Pryde, and more.

The story is off to an intriguing beginning and strikes the right balance for new and veteran X-Men audiences. What’s more, it is refreshing to see a comic book with women who are clothed almost from head to toe — Coipel draws the X-Men with reasonable proportions and costumes that actually cover their skin (even Psylocke).

I’m not the only one singing the praises of the new series and the women of the X-Men, though. Singer Adam WarRock dedicates this song to the “ladies with the X on the chest” – the “X-Women!” 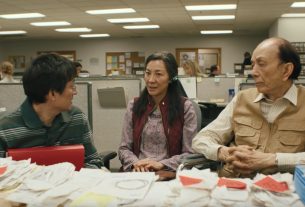 GeekDad: Watch This: ‘Everything Everywhere All At Once’ Trailer Has Michelle Yeoh and Googly Eyes

Just Say No to Screen-Free Week