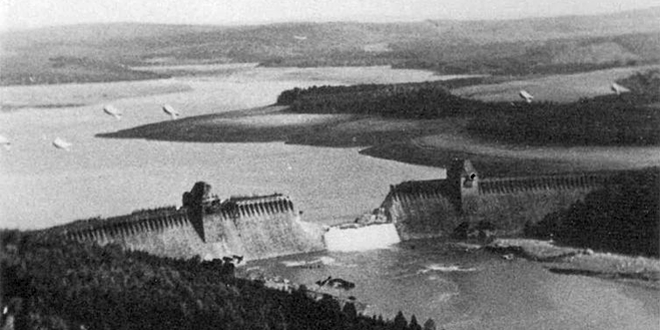 This week is the 70th anniversary of the Dambusters raid, one of the most celebrated military operations of World War II but not very well known outside the UK. All week here in the UK there have been special documentaries about the attack, as well as news features, and showings of the 1955 movie. This afternoon my home city is celebrating with a special service at the cathedral and a flyover by a Lancaster bomber, the plane that performed so spectacularly in 1943.

The story of the Dambusters is familiar to almost every Brit but always worth retelling. During WWII, the German Ruhr Valley and its dams was identified as a strategic target. This was a heavily industrialised area and the dams supplied hydro-electric power, pure water for steel-making, and water to feed the canals–not to mention drinking water for the thousands of workers. It was calculated that repeatedly bombing the dams would breach them.

However, the degree of accuracy required was too much to maintain under enemy fire. A smaller explosive would work if it could be detonated below the surface of the water right beside the dam wall, but the dams were protected by heavy torpedo nets to prevent such an attack. Barnes Wallis (who was later knighted) had developed a bomb that when dropped from just the right height and at just the right speed, would skip across water for a significant distance in just the same way that children skip stones across a lake. The residual spin when the bomb finally reached the dam would cause it to run down the side of the bomb to its base under the water.

Trials were run on plaster models and a disused dam in Wales and were successful enough for 30 Lancaster Bombers to be assigned to the mission with just eight weeks to train.

For the operation to work, the Lancasters had to fly at night at an altitude of exactly 60 feet over the surface of the water, at precisely 232 miles per hour. The barometric altimeters used at that time were not accurate enough to keep them at the exact 60 feet required, so another method was needed. Two spotlights were mounted under each aircraft, angled so that when the planes were at the correct height the two beams would converge on the water’s surface.

Another issue the crews had to overcome was knowing the exact distance at which the bomb had to be released for it to skip correctly and detonate against the dam. Two of the dams had towers at each end, so targeting devices were made that marked the angle the towers would form when the plane was at the correct distance. These devices struggled to work because of the intense vibrations of the planes. The crews used other techniques that included marking the correct angle with a piece of string tied inside the cockpit and pulled back in the manner of a catapult.

The crews spent the weeks running up to the attack training over a number of reservoirs in England, most famously the Derwent Reservoir in Derbyshire which now displays a plaque commemorating the attack. Derwent was used because its two towers were very similar to those at the German dams.

Eventually, on May 16th 1943, the bombers took off from Royal Air Force Scampton in groups, flying low over the German countryside (sometimes even below tree level) to reach their targets. Many of the bombers made repeated runs at the dams before being satisfied enough to drop the bombs. The operation was a success with two dams fully breached and one lightly. However of the 19 bombers that took part eight were shot down, 3 crewmen captured and 53 killed – a casualty rate of almost 40% and something the bomb’s creator, Barnes Wallis, never forgave himself for.

Today the Dambusters are remembered as heroes, especially here in Lincolnshire where I now live, which is just a few miles from RAF Scampton. The squadron members were awarded many medals and went on as a specialist unit that still exists to this day with the motto “Après moi le déluge” (after me the flood).

The raid did not have the military effect that was initially hoped. It did succeed in many other ways, including as a desperately needed boost to British morale, and as a demonstration to Stalin and to a lesser extent the USA, that Britain was a powerful and effective ally. The 1955 film The Dam Busters was very popular at the time and still regularly airs here as a classic, almost every Brit can hum the theme song. Its depiction of the raids provided some of the inspiration for the Death Star trench runs in Star Wars Episode IV and the operation was the inspiration for an early computer flight simulator released in 1984.

As of today a re-make is planned by Peter Jackson with Stephen Fry writing the script, however little has been heard of late.

The Hadron Collider (Sort of!) Can Be Found in Australia

2 thoughts on “70 Years Since the Dambusters Raid”