Well, that was harrowing. As always, if you haven’t watched this week’s episode, beware: there will be spoilers below. Big ones.

We open on a house in anticipation. Sybil’s baby is imminent, and everyone’s jittery. Right off the bat, we learn two important facts: 1) Lord Grantham (apparently a Victorian at heart) can’t handle medical details, especially as regards his daughter and childbirth; and 2) for this important birth, he is bringing in the big guns: the esteemed London physician Sir Philip Tapsell, who delivers all the bluest-blooded babies. Dr. Clarkson is quietly annoyed by this, but he’s used to experiencing frustration with the Crawley clan.

We’ll leave the family to wait anxiously and take a look at what’s going on with everyone else.

Oh, Daisy. She’s jealous of Ivy, the new kitchenmaid, and everyone knows it. Alfred’s quite flirty with Ivy, which has Daisy glaring and furious (although Ivy, if Daisy would just notice, only has eyes for the new footman, Jimmy Kent). Daisy snaps at Ivy at every opportunity. Daisy reminds me here of a toddler with a cup of juice. The child tips the cup, a little juice sloshes out, and instead of straightening the cup and halting the spill, the toddler — I’ve seen it a hundred times — will simply tip the cup farther, dumping out all the juice. Daisy is standing there with her cup upside down, pouring rage all over everything. It’s not doing her any good; Alfred, seeing what a hard time Daisy is giving Ivy, draws upon his hotel experience to curdle a sauce Daisy’s been making, then shows Ivy how to rescue it. Daisy is forced to choke out a grudging thanks to her nemesis. I fervently hope she takes Mrs. Patmore’s words to heart: “Alfred won’t like you any better for being rough on her.”

Mrs. Crawley offers Ethel — who is no longer working as a prostitute, now that she doesn’t have a child to feed — a job at Crawley House. Ethel is stunned by the kindness of the offer, but worries that Isobel underestimates the censure she is likely to bring upon herself. And indeed, as soon as Mrs. Bird, Isobel’s cook/housekeeper, hears the news, she tenders her resignation. “If I tolerate her,” says Mrs. Bird loftily, “I will be tarnished by her reputation.”

She’s nonplussed to discover that Isobel lets her go without batting an eyelash. Indeed, these days Isobel seems to be smoldering with disgust at the close-mindedness around her. I think she’s fed up: so many years of roadblocks being put in the path of her good intentions, roadblocks made of rigid class roles and inflexible attitudes. Isobel, for all she can be obnoxious about inserting herself into other people’s business, has the heart of a true progressive. She’s quick to discard systems she perceives as impractical, and she’s impatient that others are reluctant to do the same.

And so she bids Mrs. Bird farewell with a remark worthy of the Dowager Countess herself (in response to Mrs. Bird’s declaration that there is always work for a plain cook): “And they will find one in you.” Ouch.

This turn of events throws Ethel into the kitchen, where she bungles a kidney soufflé (gah) and even manages to mess up a cup of tea — which feels a bit over the top.

Carson, hearing about the new arrangement, is appalled, and orders Mrs. Hughes to forbid the maids from entering Crawley House. “And,” he bellows as an afterthought, “the FOOTMEN.”

When Bates hears Anna’s report on her interview with Mrs. Bartlett, he realizes Mrs. B’s evidence can exonerate him: She saw Vera alive (and making pie crust) in the evening (the gas lamps were lit) — meaning Bates was already on the train back to Downton by then. And the police testing determined that the poison could only have been in the pie. Ergo, our Mr. Bates is innocent, as Anna knew from the start. Anna now believes that Vera deliberately poisoned herself in order to frame Mr. Bates and get him hanged — the ultimate revenge.

The trick will be getting Mrs. Bartlett to reveal this evidence to the authorities, since Mrs. B. may believe in her heart of hearts that even if Vera committed suicide, it was Bates who drove her to it. Even thornier, it seems the prison guard who has it in for Bates is aware of Mrs. Bartlett’s potential testimony, and he enlists Wicked Cellmate Craig to help find out what Bates is up to.

O’Brien’s malicious plan is coming off beautifully, as far as she is concerned. Thomas took her bait and is making cautious moves on Jimmy, giving him an up-close-and-personal lesson in winding the clocks. (Which, by the way, is supposed to be the job of the first footman. Sorry, Alfred.) Jimmy is uncomfortable and suspicious, and O’Brien permits herself a tiny smile of satisfaction, which in any other episode would have been in the lead for Most Dramatic Development. O’Brien smiled!

Edith is offered a writing gig — go, Edith! Lord Grantham is sneery. Matthew is sweet. Violet pretends to be astonished. Edith is bitter about her family’s perpetually negative reactions. But everything’s about to change for this family, and maybe they’ll have cause to treat Edith with more tenderness in the future. Or maybe not, if you ask Mary.

And now there’s no avoiding it: Sybil’s delivery and its aftermath. I don’t know about you, but I was shattered. The whole episode seemed to be pointing in this direction, and I was hoping for a fakeout, but nope.

As the evening wears on, fear swirls and eddies around the family. Lord Grantham trusts Sir Philip absolutely, is dismissive of Dr. Clarkson, and for goodness sake don’t anyone mention the word ‘urine’ or Robert will need the smelling salts. Cora worries: Sir Philip doesn’t know Sybil like Dr. Clarkson does. Tom is utterly bewildered, as well he might be. Dr. Clarkson wants to move Sybil to the hospital and deliver via Caesarean. He can’t promise nothing dire will happen, and Sir Philip is resolute in his unconcern. Typical childbirth, he says, and his snobbishness and scorn is poured on so thickly that you just know things aren’t going to turn out well. And they don’t. A healthy baby girl is born, and everyone breathes a sigh of relief, oh weren’t we all so silly, let’s go to bed. And then — it happens just as Dr. Clarkson feared.

Even today, the cause of eclampsia “is not very well understood” (so says the NIH). As in Sybil’s case, it can mean seizures during or immediately after pregnancy. The most horrifying part of this scene — Downton Abbey’s most wrenching scene yet — is the way the doctors stand helplessly at the foot of the bed while Sybil convulses and stops breathing, not trying to save her, not doing anything at all. Watching in horror. It’s the family — Cora, Mary, Tom — who are clutching poor Sybil, begging her to breathe, watching her slip away before their eyes. The scene seemed to last forever. Which is exactly right. In a show with a tendency to whisk breathlessly from one dramatic event to the next, this was a long, painfully long, heartbreaking scene, with the camera lingering on the reactions of each devastated person in the room.

I love this show, but I hated this plot twist. It felt like a twist to me — so much of Downton does feel plotted; I find myself extremely conscious of the writing in a way that doesn’t often happen with a show of this caliber. (Doesn’t stop me from loving it, though.) When a character does or says something outrageous, I’ll often think, “Now why did the writers make her do THAT?” — not “Why did she do that?” And the buildup to Sybil’s death felt writerly to me in all the worst ways. Sir Philip’s over-the-top dismissal of medical symptoms; Sybil’s conversation with Cora after the baby was born, when she made Cora promise to help make sure Tom didn’t follow through on his new plan to move them to Liverpool where he could be a mechanic for his brother — all of this felt like big signposts pointing toward Dramatic Event, and I was frustrated.

But the death itself — ah, I didn’t think about writers then. I was caught up in the anguish in the room.

But I hate that Sybil is dead.

It will be interesting to see what kind of wedge this drives between Cora and Robert — she blames him; it would be hard not to. Her “I would have moved her [to the hospital] AN HOUR AGO” was gut wrenching. Elizabeth McGovern’s performance this season has been truly magical: such depth and raw emotion, such heart.

Matthew got himself into the doghouse with Mary by taking a minute to chat with the estate’s attorney (who arrived, poor man, the morning after Sybil’s death for a prearranged interview with Anna about Mrs. Bartlett) about the future of the estate. Matthew finds an ally in Mr. Murray, but Mary overhears and is appalled that Matthew would bring it up at such a time.

At the news of Sybil’s death, Thomas breaks down in tears. “In my life, I can tell you, not many have ever been kind to me. She was one of the few.”

I can’t pick a best line this week. All of the good ones were tragic.

What did you think?

If you can’t bear the wait to find out what happens next, Downton Abbey Season 3 is now available on Blu-ray/DVD via PBS. 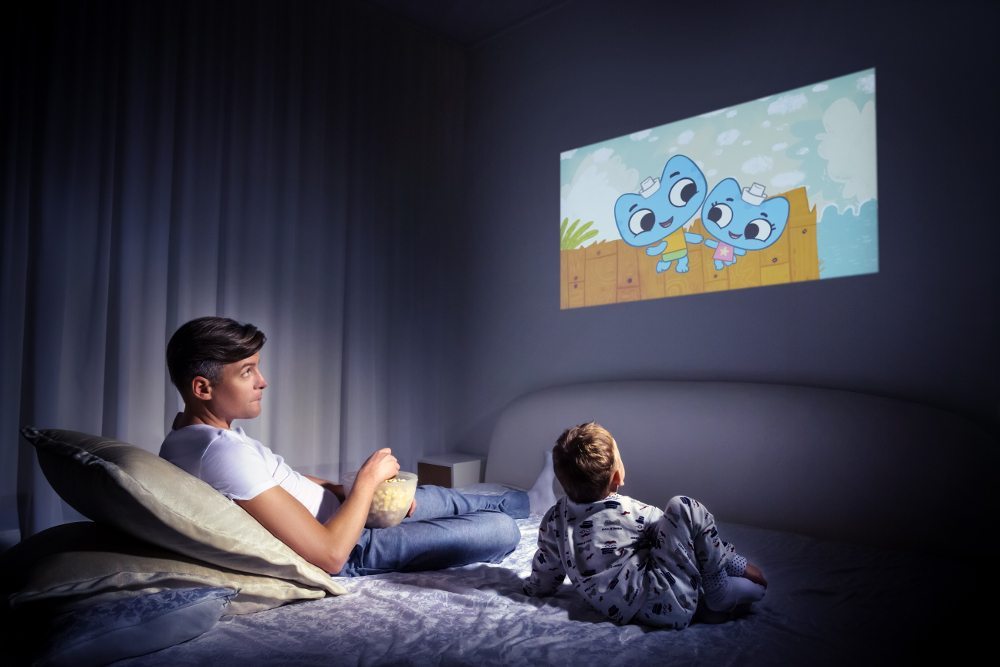 10 Ways to Bring Your Family Together With a CINEMOOD Storyteller