It’s sort of a universally accepted fact that bacon is one of the best foods known to mankind. No other food garners quite the same level of fanatic devotion and adoration. As a result, it’s been incorporated into all sorts of recipes in an effort to create the ultimate bacon experience. I am guilty of adding more bacon than required whenever it’s called for because, it’s bacon, why not? I thought I was really living on the edge when I bought a bacon chocolate bar. This was at a little specialty shop in Boston and I walked out clutching my treasure, ready to fend off the masses who would obviously kill to have this for themselves.

I sat down on a bench and unwrapped my treasure thinking of all those shows you see on TV with people savoring weird foods. I decided to follow their lead and started with the aroma. It smelled like chocolate, which, although a wonderful smell, did not hold the promise of bacon. Then I cracked a piece off and looked at what I was about to eat. I saw teeny tiny little bits of bacon. Teeny. Tiny. This did not make me happy but I popped a piece into my mouth anyway. The chocolate was as good as it smelled, but the bacon was barely noticeable. I had just paid nearly $10 for a chocolate bar that did not live up to my expecations. The bacon was a lie.

Months later, I purchased a Talking Bacon plush from ThinkGeek. You press his side and he says “I’m bacon.” It was what my daughter wanted for her birthday more than anything. Yes, I was equal parts thrilled and scared. Bacon plush has been a big hit with every child in our neighborhood. He went in for show and tell and I had half a dozen parents contact me to find out where they could get him. Talking Bacon is the man!

One afternoon, my daughter’s friend, James, was marveling at the wonder of  Talking Bacon and asked where I’d gotten this amazing creation. I told him and then loaded up the site so he could see it for himself. It’s fair to say that his eyes bugged out of his head when he saw the assortment of geeky goods on the screen. Bacon popcorn! Bacon gumballs! Bacon jelly beans! I don’t think he could have been more excited if I’d told him school was cancelled for the rest of the year.

When his Mom came to pick him up, I told her that he might be asking for a bunch of bacon stuff, and then did the obligatory “Oops, sorry, I kinda set you up there. My bad.” apology.  She rolled her eyes, looked at her son, and told him she was not buying him a bunch of bacon stuff. He looked sullen. He gave her a masterful pout. He even made his lip quiver. No luck. So, James turned his charms on me. Me. Keeper of all things geeky. Writer of geeky stuff. Player of video games. I was his only hope.

I put this off for months, thinking he’d forget, but every single time I saw him, he asked if I’d gotten the goods. My answer was always “Not yet.” Then he showed up for a playdate with my daughters in an Angry Birds shirt which he proudly wore and, I thought, I just had to help this burgeoning little geek in the making. I contacted ThinkGeek.

And because ThinkGeek is so cool, they sent me a whole box full of bacon goodness. I was excited to try these bacony treats, but a little nervous. Unlike the bacon chocolate bar with barely discernible bacon, the whole box smelled like bacon when I opened it. Popcorn, gumballs, jelly beans, lollipop. Where to start?

I opened the tin of  Bacon Gumballs. They sure smelled like bacon. And they were a brick red color that looked like bacon. I decided it was best to have something to drink handy, like when my kids are forced to try something new, just in case the flavor killed me. I put it in my mouth and it was bacony. I chewed it and holy overwhelming bacon flavor! I didn’t think it was possible but it was actually too much bacon. I made it through maybe half a dozen chews before I had to spit it out and chug half a glass of milk.

My kids found this hysterical.

I moved on to the Bacon Beans. I’d learned from the gumballs and had a glass of milk actually in my hand as I popped a jelly bean in my mouth. I chewed, and chewed and, bacon explosion! Out with the jelly bean, down with the milk.  This left the lollipop and the popcorn. I wasn’t sure I could do it, but, I persevered and went for the Bacon Lollipop. Again, milk in hand, I gave the lollipop a few licks. It was tasty! It was sweet and had just a hint of bacon and, I liked it, I really liked it. My kids now wanted to try it but I told them they had to have a jelly bean and a gumball first. They declined.

Once the husband was home, I decided it was time to pop the popcorn. You know how, in an office, someone can pop popcorn on the other side of the building and you can smell it? Yeah, well I think my neighbors may have smelled the Bacon Pop right through the walls of my house. It smelled like the gumballs tasted and I was, um, terrified. I held my nose, grabbed a new glass of milk, and tried a few pieces. And then a few more. Another bacony success! If you can get past the overwhelming aroma, the darn stuff actually tastes really good.

So, in my quest for bacon I found two tasty treats in the lollipop and popcorn, and two that didn’t quite cut it in the gumballs and jelly beans. They are, however, the perfect thing to keep at your desk, luring in unsuspecting co-workers. Trust me, it’ll be good for a laugh. I even conned the kids over for a playdate yesterday into giving them a try and the looks on their faces, absolutely priceless. They did not like, except for one girl who liked the gumballs. She’s either exceptionally brave or crazy. I’ve yet to decide.

Ah, but what about the boy that started it all? What did James think? Well, oddly his Mom, who is a good friend, hasn’t responded to the texts I sent her about the bacon stuff. She must be really busy because she couldn’t possibly be ignoring me. I’m going to continue testing this on the neighborhood kids, but not to worry. Next time I see James I’ve saved a whole pile of bacon flavored tastiness for his geeky little heart.

Thanks to ThinkGeek for sending me (and James) all this bacon goodness! 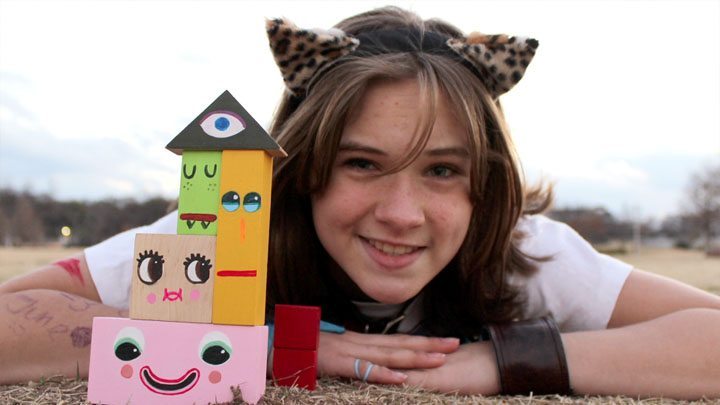