A few days ago, during a rather Star Trek-filled conversation between him and myself, one of my husband’s friends looked around in confusion, then said to my husband, “I am about to be out-geeked by a lady.”

What he doesn’t know is that I, and so many ladies like myself, may “out-geek” him in a lot of ways, and not just genres that involve green-skinned ladies or red shirts of death.

I assured him that I do that to men quite frequently, and that is okay to be afraid and confused by it. One day, he will learn to accept that girls can “geek out” just as much as boys, and if he is really lucky, his children will benefit from having a mother that out-geeks her own children, in a loving way, of course. I can attest that my own sons already show a partiality to girls who are gamers instead of socialites.

I remember the first time something similar happened to me. I was a budding geekling at the tender age of fifteen years. I spent a lot of time with my church’s youth group, maybe in part because there were boys involved. If I remember correctly, I didn’t even like any of the boys, but where there are teenage boys, teenage girls will follow. And follow we did. During one outing, a few of the guys were discussing a fun time they had a few days prior; someone had set up a giant screen in the church parking lot and played the original Star Wars film. This was way back when we all knew, without knowing any different, that Han shot first. I heard the guys talking about it and walked right up and asked, “Hey! Why didn’t I know about this? When was that?” One of the guys, one that I had always thought was particularly nice and even treated his mother with respect, almost shocked the tight-roll out of my acid-washed jeans when he turned to me and answered back, “What do you know about Star Wars? You’re a girl.”

My face turned red. I was speechless; there was nothing left for me to do but turn around and walk away. I was always taught that if you can’t say something nice, don’t say nothing at all. Well, that is what I learned from watching Disney’s Bambi, anyway.

Looking back on that moment now, I should have called him a scruffy-looking nerf herder before storming off, with the “Imperial Death March” playing in my imagination, to set the scene. What I do realize now is that he may have done me a favor. I decided that day that I would learn as much as I could about the things that I love, so that if ever confronted with such a challenge again, I would be ready, lightsabers blazing.

Ladies, has this ever happened to you?

Have you ever heard geeks of the male persuasion discussing the finer points of a topic you know and love so well, then proceeded to interject your highly logical and knowledgeable thoughts on the matter, only to be given the cold shoulder because the guy geeks think you would look better in a Leia slave-outfit than trying to act like you actually know something about the beloved Lucasfilm franchise? There are the exceptions to this, we know it to be true, or we wouldn’t have our beloved GeekDads. Geeks of the opposite sex do find each other and fall in love, producing wonderful little geeklings to carry on our traditions and action figure collections.

I feel like the guy geeks who make these comments and observations are just misguided; if they really knew how much we love and respect the very things that they love and respect, how could they not think that we geek girls are just the bees knees? Without giving away too much personal information about myself, one of the main things that my husband listed that he loved the most about me once, was that I know so much about Star Wars.

To the geek dads and guys who see us geek girls and geek moms for all of our sci-fi, fantasy, super hero-loving ways and love us all the more for it, thank you for letting us be who we are. To the geek guys who haven’t figured us out yet, it’s time to realize that the times, they are a’changing! Besides guys, who would you rather spend the rest of your life with: A girl who, when talking about the handsome Capt. Jack, is referring to Johnny Depp’s character in Pirates of the Caribbean; or a girl who can explain the correlation between Capt. Jack and Doctor Who, knows your favorite super hero and will teach your children why it’s important to always have a towel handy? You tell me. Just you tell me.

Try Trick or Treating at a Nursing Home–It's a Win-Win! 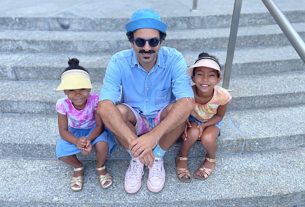 6 thoughts on “Out-Geeked by a Lady”