I have clear memories of enjoying roller coasters when I was a child. I was more than willing to endure the scorching treks around the amusement park, on simmering black asphalt, just for the chance to take that 2 minute joy ride.

Then grown up life started and my opportunities for the activity came to a screeching halt. It’s not that I suddenly didn’t like them, I was just rarely at an amusement park, in the years we were raising a house full of toddlers and preschoolers. Then, right before we decided to have our fourth baby, I made it a goal. I figured once I started another pregnancy, and then more years of baby raising, I might be getting a senior discount before I got another chance to strap myself into another roller coaster car.

Hubby was all for the random trip to Six Flags, which was three hours away from our house, and we were magically able to work out child care for our youngest ones. At the end of the day I was weary. Weary from walking miles and miles of that hot asphalt (did we really walk that far when we were kids?)

And I was surprised. Surprised to find that I just didn’t get it anymore. I rode the coaster. I rode several that day. But I enjoyed none of them. They were all very jarring and gave me a revolving  headache. I found myself aching to be that lady on the bench, in the shade, sucking on a cold Popsicle.

I tried to cope with what this meant in the big picture. I was truly no longer a kid. I had officially entered the land of the boring, risk-hating grown ups. I tried reminding myself that I did plenty of other adventurous things. Driving cross country alone with two preschoolers is truly not for the faint of heart. And hubby and I often took the kids on adventures that involved walking trails in the woods and throwing rocks in a creek. I wasn’t necessarily ready to sign up for the nursing home yet. It was just time to make peace with the fact I no longer enjoyed being flung around like a rag doll in a machine that may or may not stay on its tracks.

To be totally honest, that really wasn’t the last time I tried a roller coaster. After I replaced my worn out flesh and bone leg with a strong titanium one, I was really curious as to whether I was still eligible to do things like riding a roller coaster. Especially the kind where your feet hang down. My leg, which is made of heavy plastic and solid titanium, is held onto my body by a single pin. It’s a screw like thing that sticks out of the end of the gel liner I wear on my leg. My leg guy promises me that there’s no way it could just fall off. He could pull me across the room by tugging on my metal leg.

But I’d heard some urban myths about people being killed by random flying artificial limbs at amusement parks. I didn’t want that to be my fifteen minutes of fame. “Loose Leg Lands on Four Year Old!”  Not the way I want to end up on Matt Lauer’s couch.

So I made the trek to Six Flags once again. This time I was flanked by a car full of teens. My little ones were all grown up and everyone made it past the  height requirement chart. We picked the coaster called “Brain Scrambler”, since it was the only one at the park that featured dangling legs.

I waited patiently in line, on a brutally hot summer day, reminding myself that I’d never have to do this again. We watched the other riders, as they zoomed past us, and I only got a bit nervous when I saw a pair of sunglasses fall from one of the cars. Looking down, to the place it had fallen, I noticed it was just one of a dozen pairs that had met the same fate.

In the end, that was prophetic. I spent the whole ride worrying that my eye glasses would fall off, not my leg. My leg never felt loose, never seemed like it was even close to flying off. I couldn’t say as much for my glasses. Or my brain, which indeed had become scrambled.

So when I saw this article, about the world’s steepest roller coaster, I was intrigued but not tempted. It’s in Japan, so the chances I’d ever be near enough to be pressured into trying it are slim. It  has a 43 meter drop and a 121 degree freefall. Oh, and it accelerates to 100mph. At one point you ride straight up into the sky, then the section headed down bumps out, cuts back in, and leaves one’s stomach in knots, I’m sure. Nope, not for me.

Some brave soul even video taped the experience, for those of us who will never be tempted to try it for ourselves. Don’t be surprised if you find yourself hanging onto the edge of your desk as you watch it.

It’s summer, the season of roller coasters! If you’re one of those crazies who still gets a kick out of them, by golly, go attack one. Maybe even this one in Japan. But for the rest of you, take heart. Not being excited about  having your brain scrambled, an experience you pay them to endure, doesn’t make you a wimp. It just makes you (us) more in touch with our logical (self-preservation) side. At least that’s what I tell my teens, every time they beg me to take them back to the land of the coasters.

Side Note: After writing this post, a story about an amputee who died on a roller coaster last week showed up on the news. Because I live in the same state where this happened, and I’m an amputee also, the story hit close to home. Although I am a big believer in amputees doing all they can in life, and reaching for their dreams, the reality is, there are still limitations that have to be considered. Just as I had to weigh the risks before I climbed onto the ‘dangling feet’ roller coaster with my artificial leg, this man should have given more consideration to the fact this ride had no shoulder harnesses. It’s a tragic story and a lesson to all of us about making safety a first priority when taking on life’s adventures. 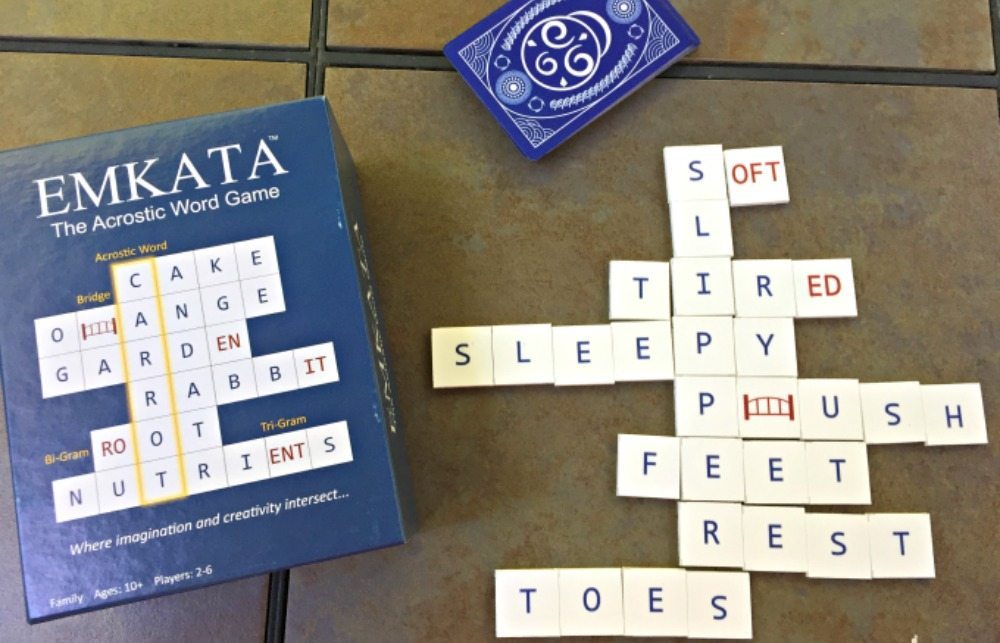 ‘Emkata: The Acrostic Word Game’ Is Perfect for Summer!