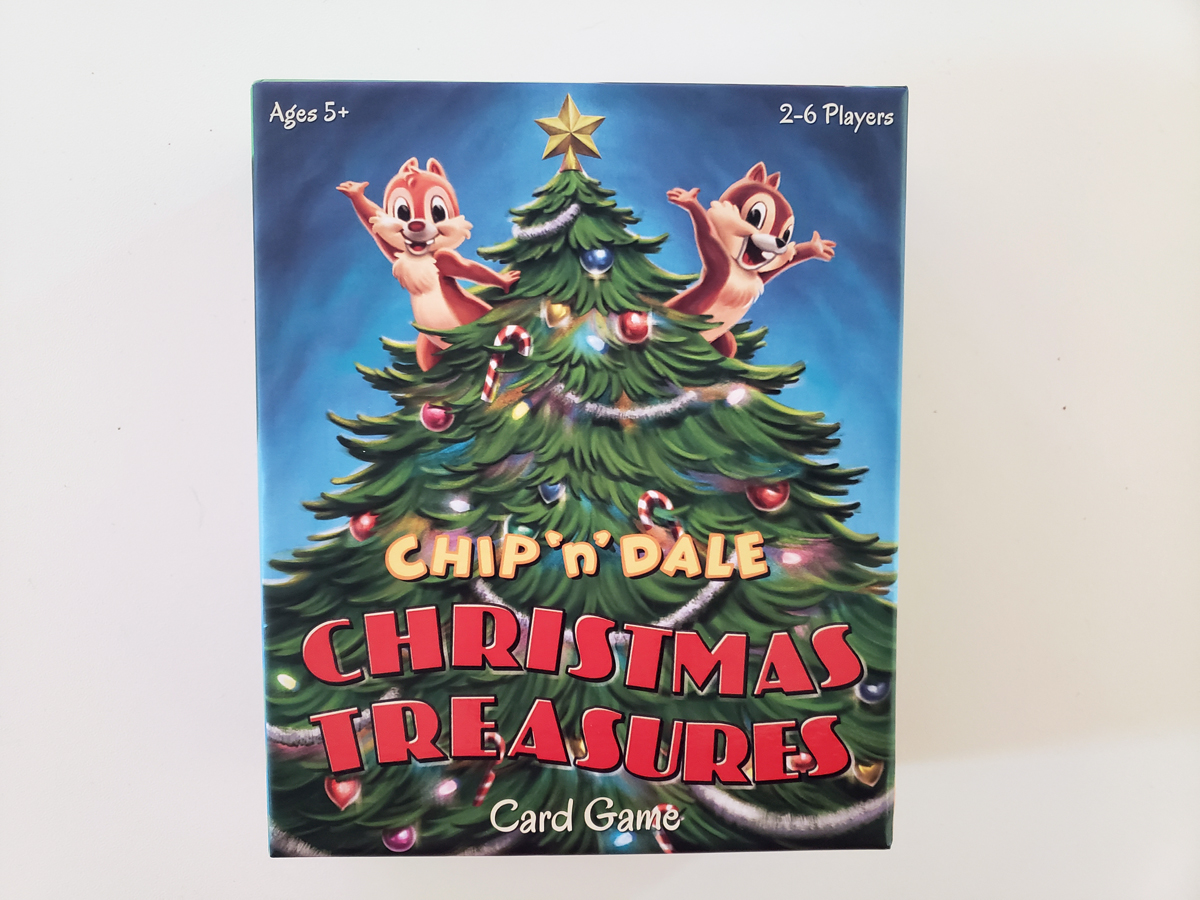 Sometimes it’s the little card games that can create lots of fun. Funko Games has been releasing a lot of smaller card games this year that are perfect for taking to a relative’s house or tucking into a Christmas stocking. Do you want to be able to play a quick game with the kids, but you’re worn out from all the holiday craziness? Funko Games probably has a card game that can save the day. My ’90s kid nostalgia has been running high, especially as this year my kids discovered some of my old favorites like TaleSpin, Darkwing Duck, old school Duck Tales, and Rescue Rangers. When I saw that Funko Games had released a Christmas-themed card game with Chip and Dale as the featured characters, I knew we had to check it out. Luckily they were very willing to send up a copy to review.

Chip ‘n’ Dale Christmas Treasures is a quick Christmas-themed card game where players flip cards to match sets for point combos. It’s aimed at 2-6 players ages 5+ and only takes about 15 minutes to play. It has an MSRP of $7.

The cards are typical game card thickness, but the Treasure Cards versus the Event Cards are easy to differentiate. All the cards have lovely artwork with these childhood favorites featured. The Treasure Cards take things an extras step further, noting the combos needed and the point values at the bottom of the card and by adding symbols in the upper corner to indicate which combo type they are so that no one, especially younger players, has any doubts. The Star Token is a thick cardboard circle with a Star Logo on it. Combined with the face-down Treasure Cards, they get arranged into a Christmas Tree formation, which is extra fun. The Instruction Booklet is great at explaining rules, using diagrams and breaking things down so that you understand the gameplay within minutes. Overall, it’s a nicely put-together little card game.

The goal of Chip ‘n’ Dale Christmas Treasures is to be the player with the most points. Points are earned by flipping cards and creating specific combinations worth different values over four to six event rounds. Players earn cards by flipping and choosing what to take, but if they aren’t careful they get caught by Pluto and can’t pull as many cards.

One of the things I do love about this game is that it sets up so quickly, especially if you keep the Event Cards on the top of the Treasure Cards in the box so you don’t have to go through the deck to hunt them down. This really turns this into a game that kids can set up and play by themselves, so if you need to buy some time while you are setting some sort of holiday thing up or finishing something up, this is the kind of game that can buy you that time. To set the game up, follow these super easy steps:

The hardest part of all of that might be the shuffling. The first time you play, you really want to get in a good shuffle so that the cards are mixed up nicely, which younger kids might need a little help with, but for the most part, this game is easy to set up and very easy to clean up.

This is one of those games easy enough to teach while watching the first person play, which is great for groups of kids who tend to get very impatient about sitting still and listening to rules. If your COVID holiday is letting you get together with some family, this is the kind of card game you can toss out to the kids and one kid should be able to teach the others to play. Gameplay starts with the last person to eat a candy cane.

The game ends after the last round is completed and players have a chance to score their cards to determine who has the most points.

Why You Should Play Chip ‘n’ Dale Christmas Treasures

Sometimes you want a fun, easy card game that isn’t Go Fish. Funko Games has been doing a wonderful job creating these fun little card games that include a lot of younger kids in the family but are still fun for older family members to play too. They are nicely put-together games without an overwhelming amount of components that set up as fast as they clean up and are easy enough to learn that most kids should be able to teach the rules to each other.

There’s a heavy luck component, but at the same time, knowing when to risk flipping and when to stop is an important feature of the game, as well as deciding if you want to grab the quick scoring single cards or hold out for the higher value combos. The game is fast enough that multiple games can easily be played. At a price point of just $7, this is perfect for stockings or fun holiday event prizes. Grab a game or two with some hot chocolate and or other holiday treats to gift a family you know with a family game night. We’ve done it before, and it goes over very well. Chip ‘n’ Dale: Christmas Treasures can be bought now via Funko Games.

To Boldly Wait Another Year

Late to the Game: Formula D