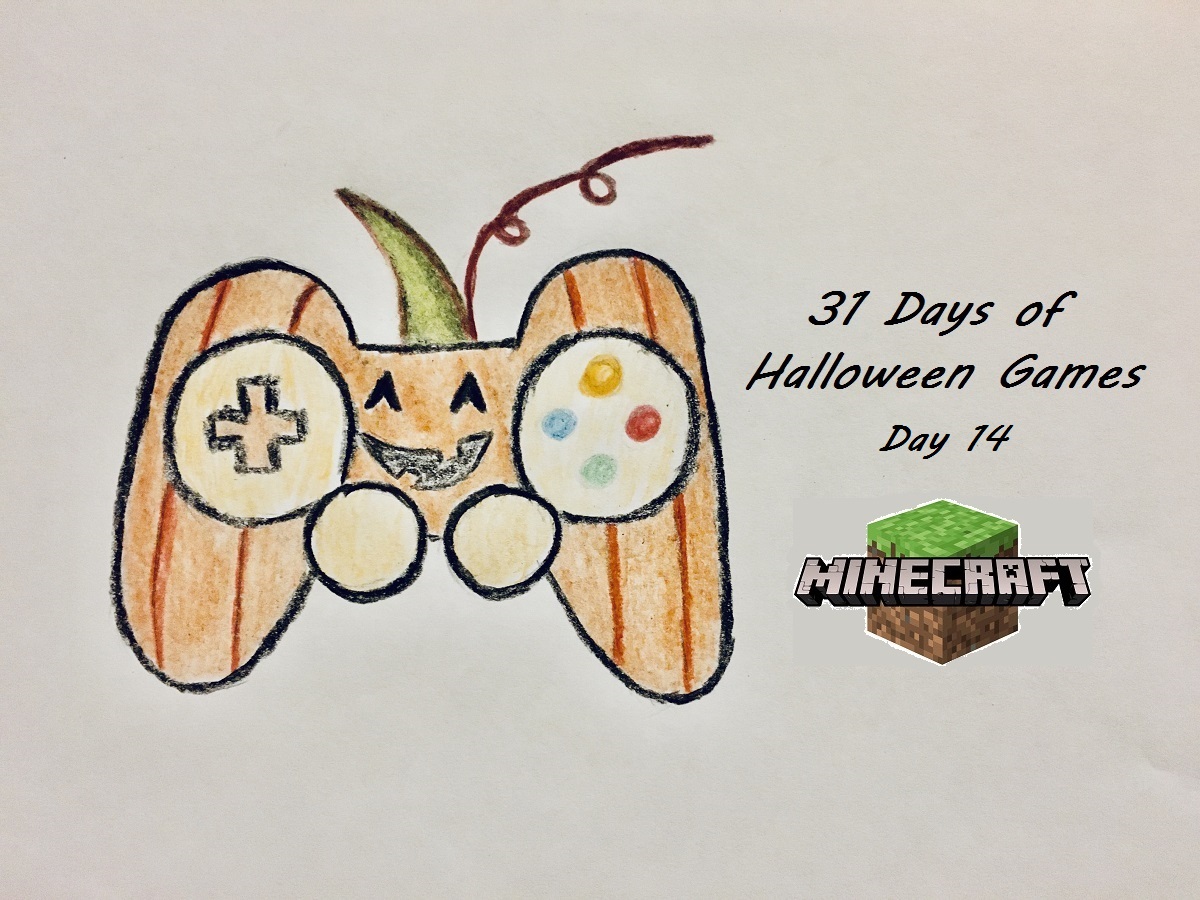 Here’s to Throwback Thursday during our Halloween Game Reviews! Minecraft has been around since 2009, with its full release in November 2011. Over the last decade, it has evolved with multiple editions, variations, and spin-off media. Today, it remains one of the top 10 viewed games on Twitch with over 200 million copies sold and over 140 million monthly active users. And if you watch any Minecraft players on YouTube or Twitch, you will see even the most seasoned of players are still scared of the Nether (shout out to the HermitCraft crew for making me feel normal about my Minecraft fears).

I think we might be hitting the age where the kids who are showing interest in Minecraft now may be the children of the gamers who checked it out in 2011. That’s not to say this is a game just for kids; it is more than suitable for EVERY age. In our family of five, we have everyone play–from 8-year-old Zaltu up to 45-year-old Evil Genius Dad! Whether you have stuck with it or freshly spawned, it doesn’t matter. Some things have changed, some things have stayed the same. Enough in both camps to warrant a quick revisit.

Minecraft is a 3D sandbox game with a mild storyline and specific goals but with far more open-world characteristics. The milestones are noted within an achievement system, known as ‘advancements’. Gameplay is mostly in first-person perspective but there is also the option for third-person (helpful during difficult positioning). You can play in either Survival Mode or Creative Mode, solo or with other players. The core concepts are the same either way: craft what you can from the resources available. With Survival mode, you will have to hunt, search, and mine for the resources you want. In Creative mode, you are immediately given access to nearly all resources and items in the game.

The graphics of Minecraft have now become iconic in themselves. Almost everything is presented in a box shape. Your head is a box. Melons are perfectly cubed (like the shelf products in Japan). Pigs are these square-shaped characters with oversized square heads. They are really quite adorable. Only a small number of resources retain some shape and even they are still pixelated. 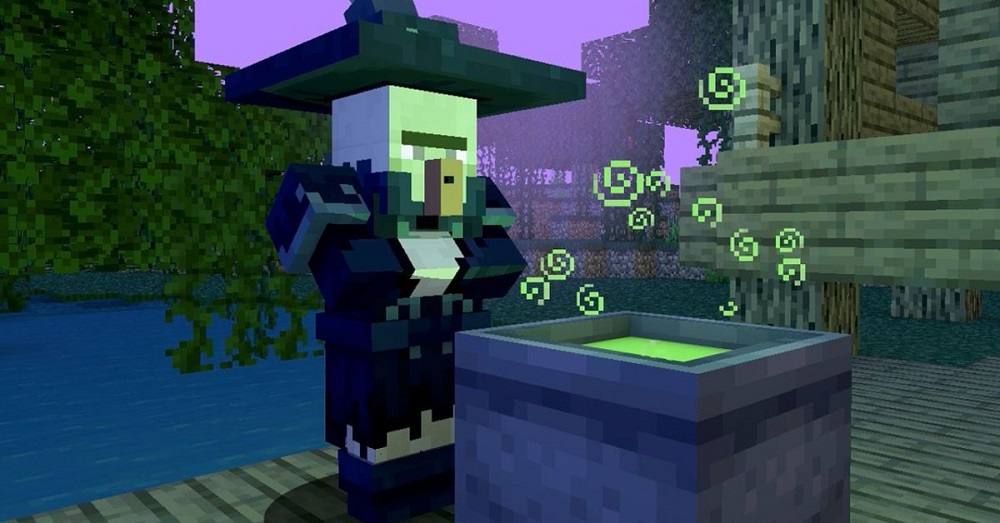 Take Me to Your Biome

Minecraft is a game of so many levels and worlds beyond the basics I just shared. Within the game, you have various biomes–landscapes and environments filled with resources both unique and shared across a few. Looking for some pumpkins? Head to a Forest biome. Ready to take on a Witch? You’re more likely to find one in the Swamp biome. Simple. The beauty of these biomes comes from the natural flow between them and the beautiful scenery they create. I never thought I would pause to admire a blocky sunset and yet, here I am. 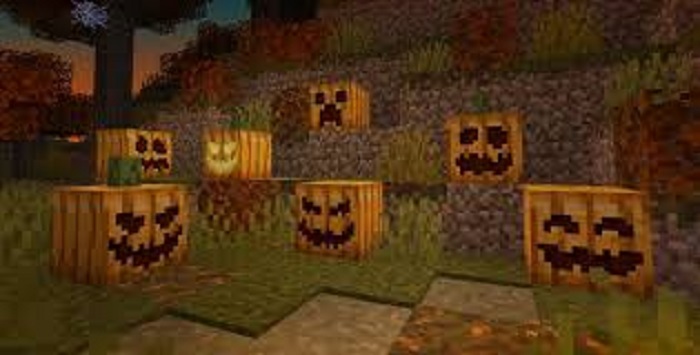 The world of Minecraft outside the game is growing in popularity as well. Regular readers of GeekMom and GeekDad have seen many articles over the years with books, cosplay, craft ideas, and coding events (I haven’t even touched on the coding elements of Minecraft). Minecraft Dungeons is a stand-alone game set in the same universe as the main software, allowing players to focus on set levels and quests while holding on to the original graphics and gameplay. There is less creation in Dungeons and it is more suited for those looking for the structured-linear game style rather than the original open-world creations.

Craft Your Own Halloween in Minecraft

Minecraft really is one of the most versatile video games I have ever played. There are so many different ways to play it depending on your preference or personal style. You can create almost any environment for any season, including Halloween.

If you are up for a battle, there are plenty of skeletons, zombies, and witches to spawn on a Halloween eve. Personally, I hate Creepers. Like, I really hate them. The sound makes me jump and I have died too many times from creepers dropping down from holes in caves. Just ugh. 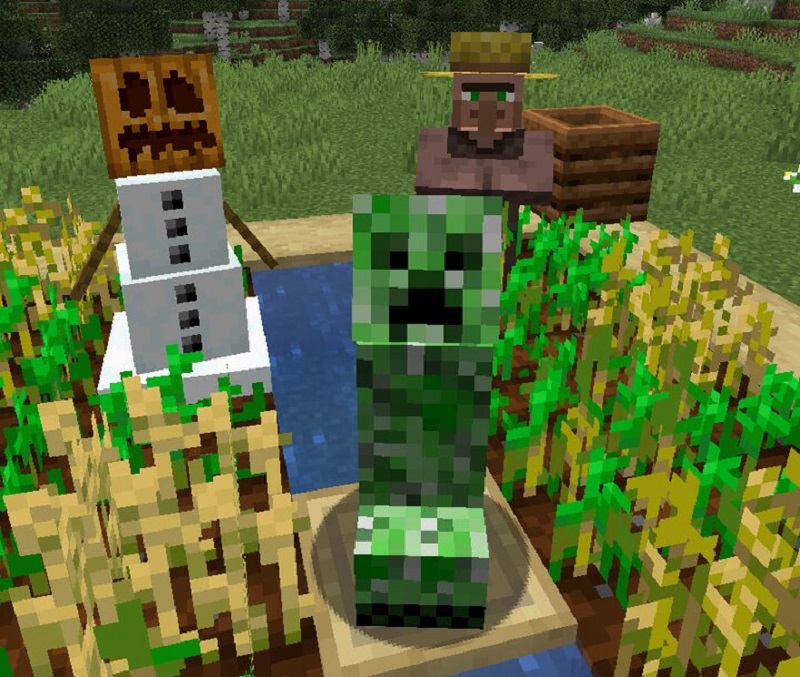 If you prefer to create your own Halloween zone in-game, start with a Jack-o-lantern made from a carved pumpkin and a torch (check out the official details here). Not only do they look spectacular but they will also keep Zombies, Witches, and Vexes at bay. Jack-o-lanterns have an extra use in Minecraft, being the pivotal piece in creating a snow or iron golem. While I do not recommend trying this at home IRL, it’s a fun addition to any set-up in-game.

In the lead-up to Halloween, Minecraft often has special features and items. This year, there are three special items available in the Minecraft Marketplace (available through the in-game menu of Minecraft on Windows 10, Xbox One, VR, mobile devices and Nintendo Switch). On October 13, you can collect a free Gourdian for Minecraft Dungeons or purchase the Cauldron Cover from October 19. On October 26, there is also a free skin pack for Halloween Fiends. 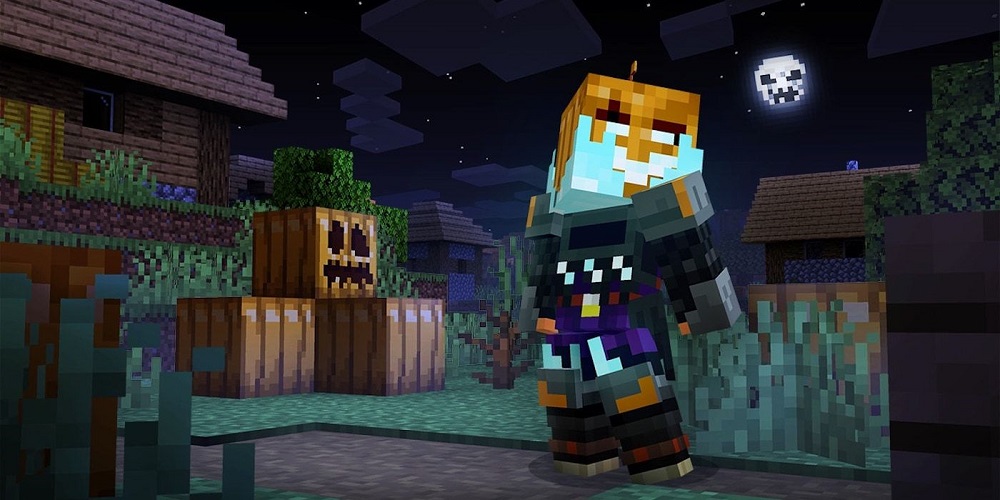 Meet You in Minecraft

There is far more to discuss with Minecraft, more than I can place in this very general review. I didn’t realize how educational it can be until Nefarious’ Year 5 teacher introduced Minecraft Educational to their classroom syllabus. Minecraft has also been a great way for our family to reconnect during COVID-19 Lockdowns: we created our own family server and encouraged the kids to connect with friends’ servers for some extra game time.

Minecraft gives you lots of opportunities to set the theme and create your world to match. Halloween is probably one of the easiest to start with–but don’t stop there! Create a world for every season!

The original Minecraft game can be played on PC, mobile devices, consoles, and VR. For full details on how to play Minecraft, visit the official website here. No compensation was received for this review.

Score: 5 out of 5 Pumpkin Snow Golems