In this month’s Between the Bookends, Sophie reads six books. She explores a wide range of non-fiction from the disappearance of flight MH370 to the life of Jeff Goldblum to the Boston Tea Party, and picks up some interesting fiction too.

Sophie kicked off her July reading with Kathleen Krull’s What Was the Boston Tea Party? This is a short chapter book that is part of a series looking at important historical events using simple language and plenty of explanations that will allow them to be understood much better.

Given that she is British, Sophie was never taught about the Boston Tea Party at school and so her knowledge of this historical turning point had come largely from memes and a passing mention in the American Adventure show at EPCOT. This book helped give those facts she had gleaned some much-needed context. The types of rules regarding taxation and trade laws that led to the Tea Party are never the easiest things to understand, yet What Was the Boston Tea Party? simplifies the necessary concepts down without ever becoming condescending. After reading this book (or listening to the short audiobook version as Sophie did), any reader will be able to explain the events that led up to the night of the Boston Tea Party, what happened on the night itself, and the repercussions afterward.

In the same series, What Was the March on Washington? explores the events of August 28, 1963. It discusses how the famous march was organized, why it was needed, and the challenges faced by its organizers and participants, as well as the results that followed in the months and years after the event. It was great to read a book about this day that didn’t focus entirely upon Martin Luther King Junior’s famous speech, although Sophie did feel it came across as a little congratulatory toward the white attendees, possibly a result of the book being written by a white author. While Sophie was far more familiar with the March on Washington than the Boston Tea Party, she still felt that she came out of this book with a more thorough understanding of the event as a whole and its significance to the Civil Rights Movement.

While these two chapter books obviously avoid going into great depth and detail and clearly skim over certain elements of the stories they are telling, they are both great introductions to the events that will give readers a solid, historical grounding and Sophie is looking forward to reading more titles from this series.

During 2020, it felt like everyone Sophie knew was reading The Seven Husbands of Evelyn Hugo, so when she was offered the chance to read Malibu Rising, the latest book in Taylor Jenkins Reid’s interconnected universe (which also includes Daisy Jones and the Six), she leaped at the chance.

Malibu Rising is a dual timeline book. The primary plot follows the Riva siblings—Nina, Jay, Hud, and Kit—on the night of their annual summer party. All four are the adult children of legendary singer Mick Riva, but by now, most are also stars in their own right. Nina is a supermodel, Jay a championship surfer, and Hud a famous photographer. Everyone who is anyone wants to be invited to the Riva party, which has become infamous for its wild antics, but we know from page one that by the end of this particular night, the mansion will have burned to the ground.

The second story follows the siblings’ mother June as she meets Mick, falls in love, and starts a family with him. However, Mick has a wandering eye, and June, in turn, prefers to drown her sorrows when her husband doesn’t come home, so their story is filled with heartbreak as well as highs, much of which will be passed down to the next generation. Gradually, the two stories will merge on one night in August 1983 and it seems like no one will leave the party unscathed.

Sophie was surprised by how much she enjoyed Malibu Rising. While she strongly preferred the chapters focusing on the Riva siblings rather than their parents, she felt immediately drawn into the world and struggled to stop listening to the audiobook (provided by Libro.fm) because the alternating POVs meant she always wanted to know what and who was coming up next. The way the chapters counted the hours until the party and then throughout the night felt like a ticking clock—we know from the beginning that a terrible fire is coming but not how it would start and what the repercussions will be. While she felt that the ending was something of an anticlimax, it wasn’t enough of a letdown to spoil the rest of the story.

Sophie knows she will definitely be picking up more from Taylor Jenkins Reid in the future and is looking forward to continuing in her ongoing fictional universe.

Parvin is having a great summer at the beach where she met a cute guy, discovered he will be attending the same high school as her, and shared her first kiss with him. However, once her first day at school rolls around, Parvin discovers that Wesley is a very different person in front of his church group friends whose parents all drive trucks with “Make America Great Again” bumper stickers. Dumped on her very first day, Parvin is desperate to save face and get a boyfriend in time for homecoming, and so she comes up with a plan based on all the rom-com movies she’s seen. She will giggle and smile instead of being so loud, stop playing pranks, and become the quiet girl who gets the guy.

Her two BFFs are unhappy with this plan, as is her Iranian aunt Sara who is planning to come and visit soon, but Parvin is determined that nothing will stop her from bagging sophomore heartthrob Matty, even if that means changing who she is. At least she can be herself when having Farsi mentoring sessions with her cute Iranian classmate Amir—but Amir couldn’t possibly be interested in a loud, outgoing, half-Iranian girl like her, could he?

Perfectly Parvin is a fun story with elements of a modern-day Grease. Parvin herself is an instantly likable character, even if you do want to spend the whole book giving her a firm shake. The supporting characters are also well developed and add a lot to the story, from Parvin’s best friends Rose (who is pansexual and obsessed with crafting) and Fabian (a gay superstar dance influencer) to all their parents and the other students at both Parvin’s high school and her Farsi school. The Muslim ban and general anti-Iranian subplots are subtle yet cleverly woven through the main story, and there are a few great moments where Iranian history and culture are explored without it coming across as info-dumping or obvious exposition.

Perfectly Parvin will make for a great summer read that touches on being educational and encourages self-belief without ever coming across as overly worthy.

Jeff Goldblum has been one of Sophie’s favorite actors for as long as she can remember, and she has watched his odd career trajectory with interest. Because He’s Jeff Goldblum by Travis M. Andrews is a biography as strange as the man himself, filled with odd interludes but still well-researched and packed with fascinating facts.

The book itself is roughly chronological, beginning with Goldblum’s childhood, stopping by his years at acting school, and then following his career from his very first role through to recent appearances in Thor: Ragnarok and Jurassic World Fallen Kingdom. It explores both his personal and professional life (and the many times they have become intertwined) and tries to explain the unexplainable: why Jeff Goldblum is just so… Goldblumy. Goldblum’s unique personality feels like its very own character throughout the book, and although no solid conclusions are ever drawn—the man truly is an enigma after all—you come away feeling you know him that little bit better.

Throughout the book are numerous interludes. These include “Three Haikus Concerning Jeff Goldblum,” which is exactly what it sounds like, “Jeff on Jeff: A (Tony Award-Worthy) One Act Play,” in which the author imagines a meeting between a young and an older Goldblum, and “The End,” in which he imagines Goldblum appearing on The Colbert Report when his own death is being reported. These, combined with the conversational nature of the book overall, make this a bizarre read full of anecdotes and asides which feels like a great fit considering its subject matter.

This is a must-read for Jeff Goldblum fans but anyone with an interest in fame and celebrity as a concept will no doubt find this an entertaining and fascinating read too.

The Disappearing Act: The Impossible Case of MH370 by Florence De Changy

Speaking of things that remain an enigma, Sophie has long been fascinated by the disappearance of MH370, the Boeing 777 that apparently vanished without a trace between Kuala Lumpur and Beijing in 2014. Written by French journalist Florence de Changy, who has covered the story for Le Monde since day one, The Disappearing Act is an in-depth look at everything that is known about the story so far.

Each chapter of the book examines a different aspect of the case in roughly chronological order. Every element is covered from numerous radar pings and radio contact to eyewitness statements, possible debris findings to the numerous private investigations that have been launched. The pilot and co-pilot are examined, as are many of the passengers known to have been on board, and many pages are given over to examining the occasionally suspect cargo manifest. An addendum looks briefly at a number of other air crashes in order to use them as comparisons and attempt to rule out certain theories.

As is probably obvious given that the case remains unsolved, there are no earth-shattering new revelations to be found here, although every page contains its own revelations as evidence is overturned and contradicts other evidence to create one of the most complex scenarios imaginable. By the end of the book, the official story (that the plane flew for hours until exhausted of fuel then crashed into the Southern Indian Ocean) appears to have been almost entirely debunked. As an epilogue, the author provides her own thoughts on what she believes may have happened, it is a story that feels more at home in a James Bond movie or episode of The X-Files than in real life but that also feels incredibly plausible given the apparent wealth of supporting evidence. However, De Changy herself admits that her own version of events still has many holes and pieces that don’t quite fit.

While you won’t walk away from The Disappearing Act knowing precisely what happened to MH370, it is a fascinating read that will no doubt leave many readers itching for more and starting to do their own research until such a day that the real story finally comes to light.

‘The Happiest Book Ever’ Puts Anytime Sunshine in Your Hands 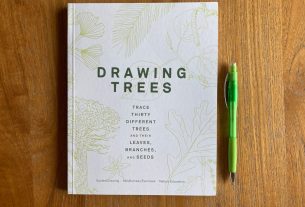 No Skill Required for a Meditative Experience ‘Drawing Trees’