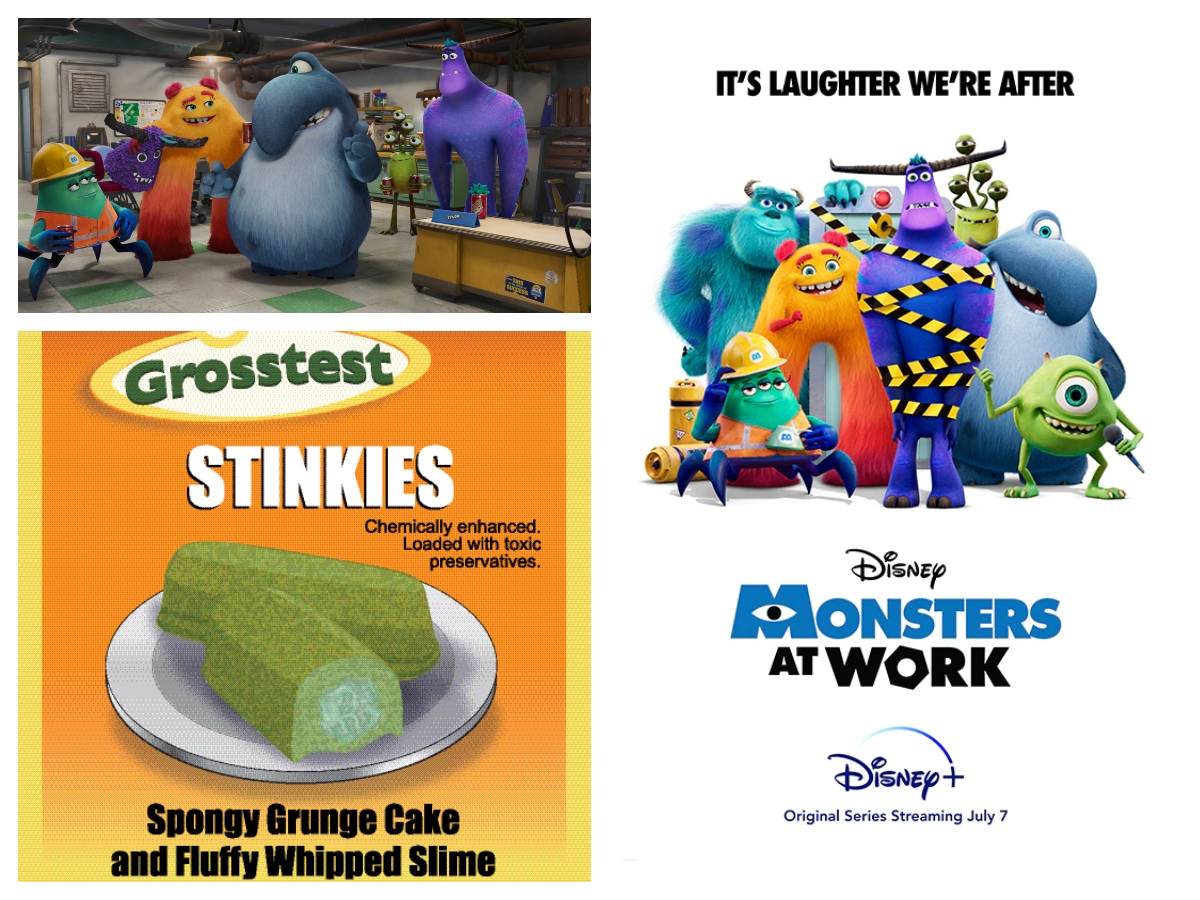 One of the most delightful franchises in the Pixar world has to be that of Monsters Inc.. Released in 2001 to great acclaim, the original movie starring Billy Crystal and John Goodman, spawned a 2013 prequel movie Monsters University, and now a long form television series Monsters at Work. My husband and I fell in love with Mike and Sulley before we had kids, from the monsters themselves, to the music, and perhaps most especially with the animation of the opening credits. Everything about the 2001 movie set a new bar in animation for me, and so the release of the new show has made me absolutely giddy to sit down and watch with my kids.

Monsters at Work picks up immediately after the first movie ends. As in, immediately. Monsters are walking around the factory wondering what they are going to do next, the scare floor is in uproar as it is turned into the laugh floor, Mike and Sulley are literally walking into the building after the end of the first movie, and the fate of young MU graduates is plunged into chaos. The star of the series is a Scare major from MU called Tylor Tuskmon, personally recommended for employment by Sulley, whose scare record at MU was broken by Tylor. However, by the time he arrives for his first day on the job, the whole factory has switched to laughter, and he is re-assigned… to Maintenance. Much like the ending of Monsters University Tylor must pick himself up off the ground and make the best of his plans going awry. With Mike to offer comedy classes, all scarers have the chance to learn how to be funny guys. With an amazing and dedicated maintenance crew around him, Tylor awkwardly sets out to pursue a new, and unconventional career at Monsters Incorporated.

There are so many things I loved about the opening episodes of Monsters at Work. From the neurotic comedy continuation of Mike to Tylor, to the running gags provided by Needleman and Smitty, the writing is incredible. And the writers didn’t take any easy outs with this. This is not a show that depicts a seamless transition from fossil fuels to renewable energy, ahem, I mean from scare to laugh power. The show depicts power outages in Monstropolis, executives wondering how to keep the lights on, displaced workers finding and training in new areas of employment. Of course these aren’t the things my kids picked up on, but it’s all there.

And as with anything from PIxar, the delight is in the details. The stickers, and posters, the ephemera in the background are all hilarious and delightful. My 9 year old was super impressed by all the details going on to the side of the main action that referenced the original movie. We got a chance to see a couple of episodes ahead of time, and I haven’t seen my kids so still or silent in front of a screen since the pandemic before times. They were absolutely riveted. The show is fun, and entertaining, full of characters that anyone can relate to. But it also doesn’t feel like a traditional spin off show like Aladdin or The Lion Guard, it feels more like a series of mini movies than something episodic, a full blooded continuation of the story set up in Monsters Inc.

I had a chance recently to chat with Ben Feldman, who stars as Tylor Tuskmon, about Monsters at Work, parenting, and his own relationship with the Pixar movies we know and love. 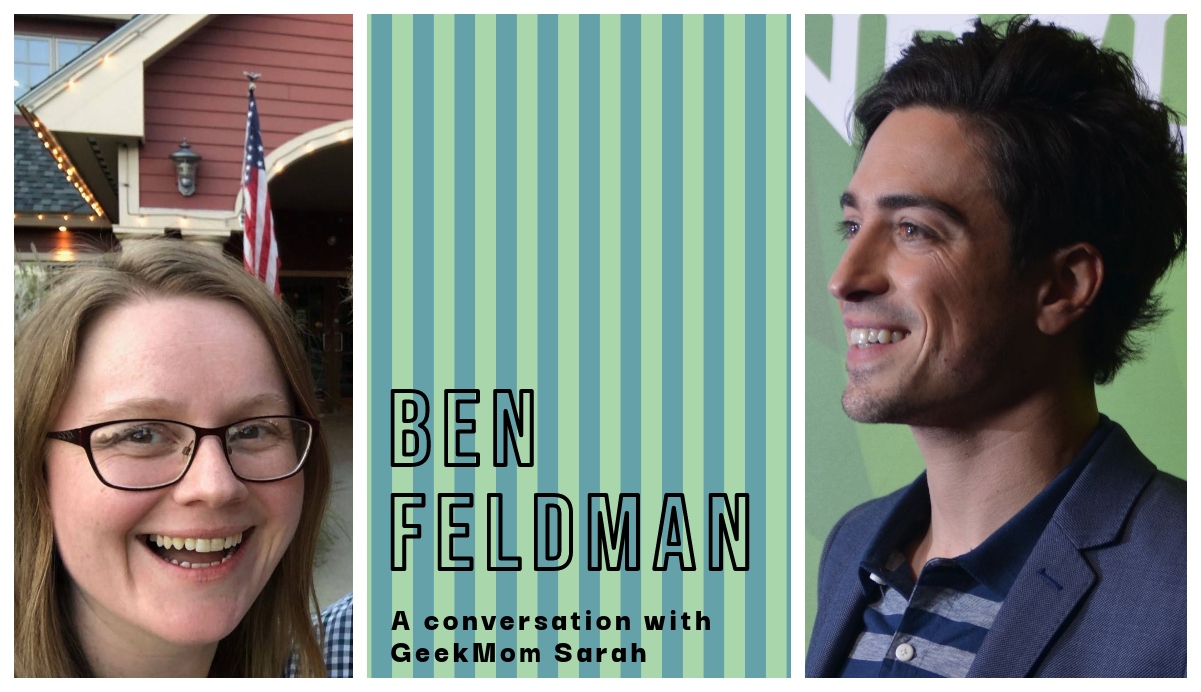 GeekMom Sarah: I’m going to start with the questions from the kids – who I’ve kicked out of the house so I could actually hear what you said. They will be mad if these are the ones I don’t get to.
Ben Feldman (Tylor Tuskmon): Oh I know what you mean, one of mine is sleeping right now or it wouldn’t be so quiet.

Geeklings:What is it like being the voice of a monster?
BF: (laughs)Not very different from being a person.I just talk and imagine being him, just being big and oafy, and having giant horns.

GM: We have a friend with a very diligent Pixar ranking system.
Geeklings: What’s your favorite Pixar movie and why?
BF: Before Kids it would be Up or something super sentimental. Something sad and dark and serious like Wall-E. Since having kids, I’d have to say Moana. (we both laugh – and talk about how many times we’ve seen that movie with our kids). I love that it taught kids about the Ocean, so there’s that. I would love for them to like Coco and we’ll probably save Soul for later, it’s a bit dark for the kids. (Ben’s kids are both under four).

Geeklings:Is your favorite monster, Mike or Sulley, or one of the new characters?
BF: Hmm, from the original series it has to be Mike, with that New York Jew energy! Definitely gotta be Billy Crystal. The monster I’m constantly impressed with is Mindy Kaling’s character Val Little. Her animation and entire vibe fit so perfectly together. I have never known a character and a voice actor fit so perfectly together, she’s just amazing. 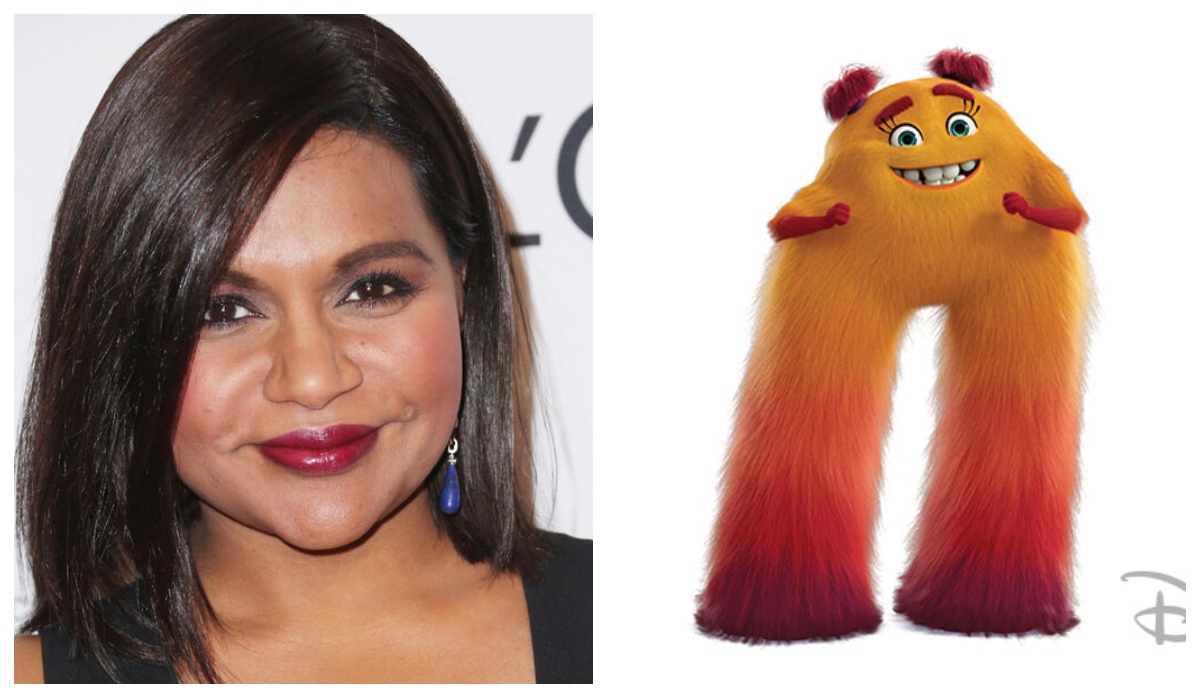 BF: With my character, the original Tylor was so much more like me – with a stammering nervous energy – thank goodness someone on the creative team said “Hey what if it was a big muscular oaf, and then was also Ben Feldman.”

Geeklings: When you were a kid, were you afraid of monsters?
BF: ell according to my therapist I was abandoned when I was 8 and have repressed all my childhood memories before then, (laughs) so I don’t remember. I would love for my kids to be afraid of monsters just so that they would stay in their beds at night. They aren’t afraid at all, if I tell them there’s monsters under their beds they would just find it fascinating. Like “Finally! there’s something in here that I can play with”. (We spent a few minutes talking about our fearless children, sleepless nights, and how parenthood changes your views of being tired and busy!)

GM Sarah: Okay, the kids are done, now it’s my turn. You have played quite a range of characters over the past decade, some more… intense than others, (Ben laughs… a lot) what were you most looking forward to about this project with Disney?
BF: It’s funny, the world of actors who voice animation has always seemed like this cliquey universe of incredibly talented people. I never felt that I would be able to do this, I’m not zany enough, I’ve always gravitated more towards a real voice. Luckily for me this is exactly what Disney wanted for Tylor, a big monster with my voice! 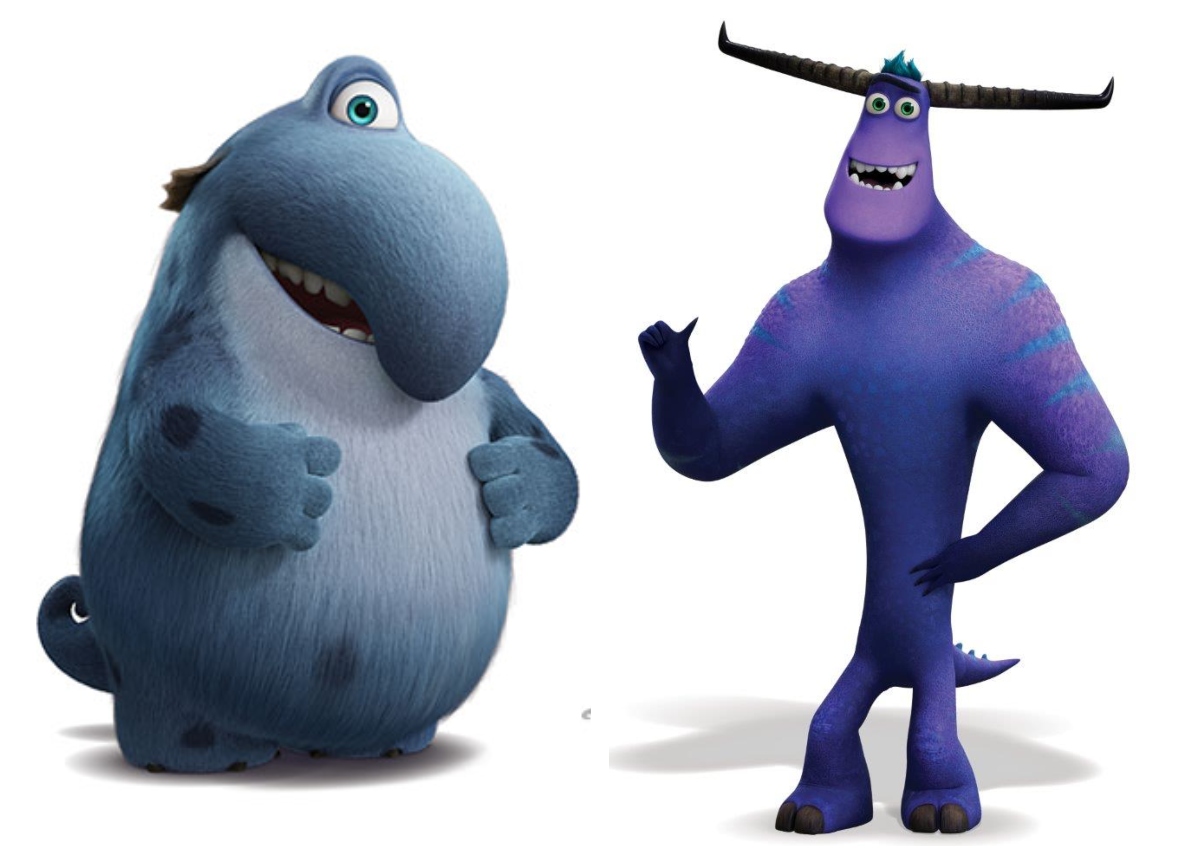 GM: It’s a great cast, but I can imagine that working on an animated project is so different than something in person. Working with legends like John Goodman, Billy Crystal, Henry Winkler, from a distance, how did you find that experience?
BF: Yeah, so shortly into making this show Covid happened and any chance of that went away, other than being with Paul the engineer. I had the chance to be in the room with Henry before everything shut down, and that was great. Doing it with zero contact has actually probably been even more surreal than doing it in person. I have my imagined version of Billy and John when I’m reading the script, and that’s what I’m responding to when I record. Then I watch the cut and suddenly I’m in a scene with these amazing people. It’s almost like waking up after a really drunk night and scrolling through the pictures. Seeing myself laughing and hugging with John Goodman and Billy Crystal. Voice work is exhausting – and yes my wife tells me that’s ridiculous. The show I was on previously, Superstore was a long day, but 12 hours of working on Superstore is like 4 hours of voice acting – you’re the only person acting.

(Somehow we got on the subject of Whiskey. We trailed off on a lot of tangents, if his agent hadn’t limited us to 18 minutes I have a feeling we would have gone down many more!)

GM: So what’s your whiskey of choice?
BF: It changes all the time. In the past I would stick to Scotch and single malt. Now I’ve gotten more into domestic whiskey and metaphorically moonshine, I feel like Americans don’t have much of a place to stand with Whiskey..

GM: You have two kids of your own, what is your favorite show or movie from your childhood to share with them?
BF: Nothing. (laughs) A lot of things from my childhood you just can’t show any more. Even Peter Pan and Tinker Bell are problematic. My son likes pirates so I put Peter Pan on, and instantly there were problems with the portrayal of Native Americans and women. Stuff you just don’t remember. I just assume that everything is problematic in some way.

GM: Has becoming a father shaped the way you look at roles you are offered?
BF: I guess to a degree. I ask myself, is this the story that I believe in, that I want to tell. I’m always looking at that, but I didn’t used to as much.

(we talked at length about comedy, and the ridiculous complaint that “you can’t do that anymore.” Feldman hates that excuse, he says there are so many funny things out there, so many people with amazing careers that didn’t have to rely on any of “that stuff” – meaning colonialism, racism, sexism, homophobia, etc – to be funny. Ben’s Instagram picture is of Max Headroom, which to me, speaks volumes to his choice in roles and viewing preferences)

GM: I have to say, I loved your portrayal of Jonah in Superstore. We seem to be seeing a theme in the media right now, of what to do with your life when plans don’t necessarily pan out, Tylor being another one. One of my boys wants to be a stay-at-home dad so his wife can do whatever she wants, did you always want to act? I assume you didn’t want to be a monster?
BF: That’s great, wow. Yeah, I just always wanted to be an actor. When I was little, the parts I can remember, part of me wanted to be a painter. It was always something artistic, I just didn’t grow out of what I wanted to do as a kid. I got my degree in acting, so it’s the only thing I’ve ever done, or ever wanted to do.

(His agent buzzed in to give us our 18 minute warning)

GM: And of course the most important question. Do you have your own action figure now that you’re in a Disney franchise?
BF: (laughs) You know we have recorded the toys so I guess so. But then it’s all to impress my kids who of course aren’t impressed.

Monsters at Work releases on Disney+ this week with a two episode premiere on July 7. After talking with Ben I have to say, I have a little bit of a crush on an exceptionally tall monster with horns, or perhaps a guy who worked in a big box store for love. Whichever way you want to go with that, Ben Feldman is an awesome guy, a great monster, and a terrific dad. I’m hoping for many seasons of this hilarious show.

Postal Fun! Make a Mailing Envelope From a Gift Bag