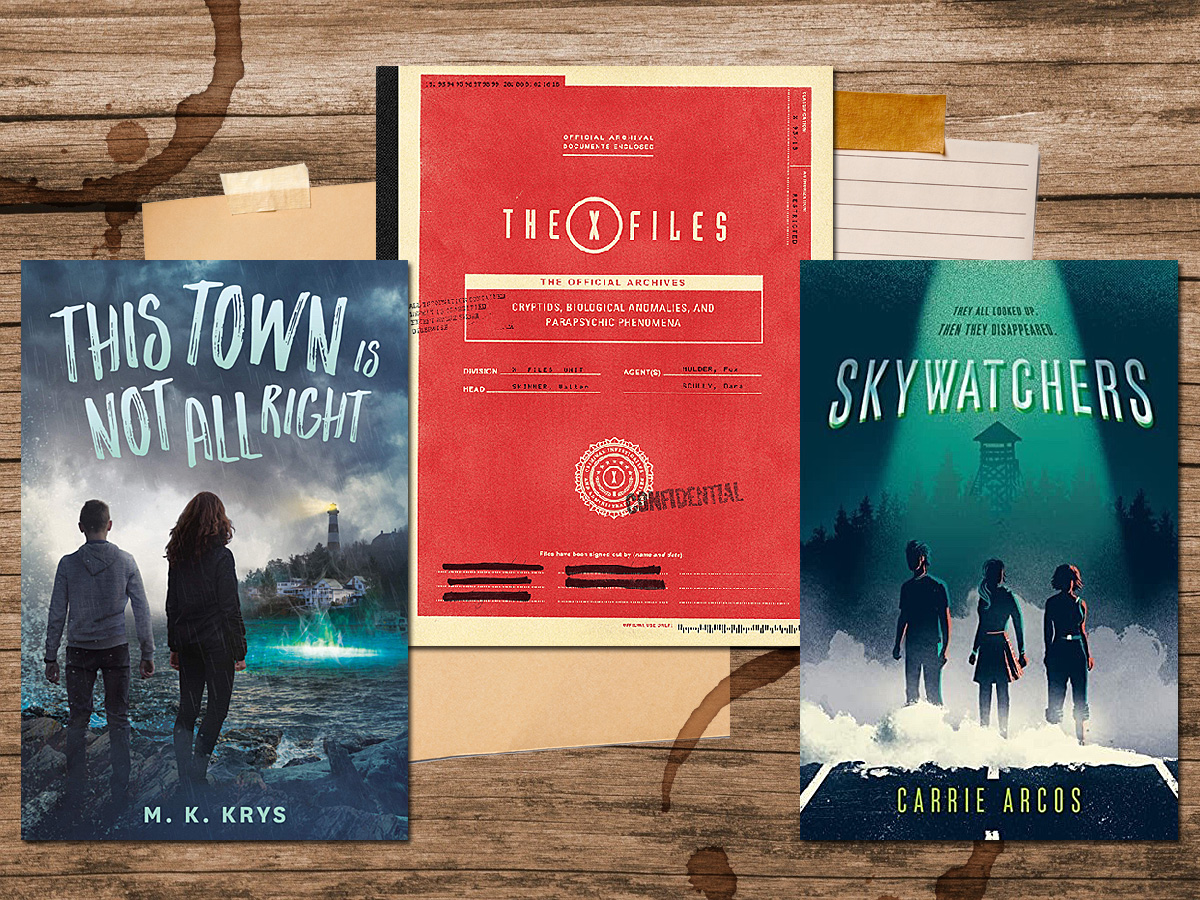 With the recent release of previously classified US government files regarding UFOs, people are once again talking at length about the possibility that our planet has been visited by beings from another world. Whether you believe aliens really are hanging out in cornfields in Iowa, or that every supposed UFO sighting is simply swamp-gas from a weather balloon trapped in a thermal pocket and reflecting the light from Venus, alien adventures often make for brilliant fiction. Here are three recent releases that touch on UFOs, aliens, and other related phenomena.

Please note: This post contains affiliate links. All author photos are credited to themselves.

This Town Is Not All Right by M. K. Krys

This Town Is Not All Right by M. K. Krys opens with the arrival of twelve-year-old twins Everleigh and Beacon into Driftwood Harbor, Maine. The twins have moved with their father from Los Angeles after the tragic death of their older brother Jason—an accident the twins both feel responsible for—and Everleigh, in particular, has been suffering from mental health issues since it happened.

As soon as they arrive, Beacon begins to suspect that Driftwood Harbor is more than a little strange. The town’s kids all act like overly polite, well-dressed zombies except for one, Arthur, whom Beacon befriends after bumping into him in the woods. Arthur quickly fills Beacon in on the town’s famous history; in 1967, a mysterious object crashed into the water by the pier but was never recovered. Arthur is also the founding (and so far only) member of YAT—Youth Searching for Alien Truth—and is dedicated to discovering the truth about the supposed UFO of 1967. At first, Beacon is skeptical, but when his own sister’s personality flips so completely that he no longer recognizes her, the two boys team up to find out what’s really happening to the kids of Driftwood Harbor and how much the adults in town, including Beacon and Everleigh’s dad, really know about it.

This was a… strange book. Genre-wise it is in some parts horror, in others thriller, and largely science-fiction but all written in a middle-grade style that occasionally comes across as if it is intended for an older audience. The story tackles government conspiracies, aliens, mental health, bodily autonomy, and—in a roundabout way—climate change, which is a lot for a relatively short middle-grade book. The pacing is also a little odd. I did appreciate the time given over to the more intimate scenes that built up the relationships between the main characters, but this meant that the action scenes often felt rushed. There were also a LOT of unanswered questions by the end, which left me feeling frustrated.

One big theme that is ever-present here is that of grief. Beacon, Everleigh, and their father are all still in a very raw place following the death of Jason, and all three are processing this in very different ways, some healthier than others. Arthur too is nurturing some deep-seated grief over the loss of his parents when he was eight, and it is this connection that initially draws him and Beacon together. The book is told entirely from Beacon’s perspective, but his close relationship with his twin sister gives us plenty of insight into her emotions too as Beacon tries to support her while holding himself together. By the end, the family has managed to take positive steps in handling their grief, but at the cost of what will likely be an enormous amount of PTSD.

Despite what might read like a somewhat negative review, I did genuinely enjoy This Town Is Not All Right, and I read the whole thing in a single day. There’s plenty of interesting alien lore at play for younger readers new to the concept to dig into and those familiar with the genre will find plenty of common tropes given interesting twists, even if some of it does push the boundaries of suspension of disbelief rather far. The book ends on an enormous cliffhanger with no current word about whether a sequel will happen, so if you need closure in your stories, this is one to avoid, but if you’re looking for an action-packed, alien adventure with a heartfelt core of love between siblings, then give it a chance.

Moving up to YA, we start to get more depth in our paranormal lore from Skywatchers by Carrie Arcos. Set in California in 1952, this book follows a group of teens who volunteer for their local Skywatch service. All have been trained by the Air Force to watch out for enemy planes carrying the dreaded nuclear weapons that Russia was suspected to be ready to send at any moment.

One evening, instead of seeing a plane, four of the group spot a mysterious green light that moves in a way none of them can explain. The strange light crashes into the forest nearby and the group decides to investigate. Several days later, three of them emerge—all separately—with no memory of where they have been. As the days go on, all three returned teens make startling discoveries. John realizes he can now play the piano, Bunny suddenly speaks fluent Mandarin, and Caroline—one squeamish about blood—can perform complex medical procedures without hesitation. With government officials asking questions and the adults of the town increasingly suspicious, it’s up to the teens to figure out what happened to them, and where their missing friend Teddy is.

This was another strange book that struggled to know exactly what to do with itself. I really loved the first third/half which covers the initial disappearance and return of the teens. Here, information is drip-fed in such a way that a sense of unease is built up. What exactly happened to those kids and is it really over? Is something watching them even now and is this even real? The possibilities are wide and frightening. Once those questions are answered, however, the book kind of lost its way. While the explanation of what really happened was interesting, it also felt rushed—this short section of the book could easily have been expanded into a novel of its own.

The tone also significantly changed at this mid-point. The first half of the book feels aimed at a younger YA audience—I actually thought I was reading higher middle-grade for a while—however, the second half is more suited to a much older audience. Caroline’s story in particular felt tragic for me as an adult reader, but I wonder how deeply it will resonate with young teens? The conclusion also felt somewhat half-hearted. The events these teens experienced would have left them deeply traumatized at best, so I struggled to reconcile that with an ending that was closer to happily ever after than the deep-seated PTSD I would expect.

Skywatchers was an interesting story and it certainly does a good job of introducing dozens of classic tropes related to aliens to younger audiences—links to the Cold War, missing time, Project Blue Book, and much more—but it also fails to really pay off on its brilliant start. There is a ripe opportunity for a sequel here and it would be interesting to see how events play out moving forward, but if we do, I hope there is more of a payoff at the end.

The X-Files Official Archive by Paul Terry is less a novel and more a part fiction/part historical archive tome that is supposed to actually exist in the X-Files universe as a real FBI archive, not a published book.

The introduction to this book comes in the form of an official letter from Walter Skinner (Mulder and Scully’s boss for most of the show’s duration) to Agent Leyla Harrison, a minor character who has a special connection for many fans. In the letter, Skinner explains to Harrison that plans are afoot to digitize the case reports compiled by Mulder and Scully over the years in order to make a more accessible database for other law enforcement agencies to access. Skinner is concerned that this process will allow the contents of those reports to be altered and redacted in order to conceal the truth, so he tasks Harrison with compiling a thorough, physical archive of every report and piece of evidence she can locate that he will then store in a secure location. The book you are holding is one of these archives, specifically, it covers the cases related to “Cryptids, Biological Anomalies, and Parapsychic Phenomena.”

What follows is a thick, beautifully laid out volume filled with typed case reports from Mulder and Scully, crime scene photographs taken from screenshots, and countless other pieces of evidence from witness statements to flyers, menus, arrest records, and hand-written letters and notes. Every page looks exactly as it would if you were reading the real FBI records, and many pages are annotated with comments from Agent Harrison as she compiled the archive in the mid-late 2000s. This allows her to comment on the ongoing status of cases/episodes with ambiguous endings—updates on escaped perpetrators and the current situation of those who were incarcerated—thus adding to the official X-Files lore.

As fans of the show will know, the X-Files office was the victim of an arson attack at the end of season five, and this is used to explain away many gaps in the record from earlier cases. A lot of attention to detail is obvious from the remaining details. Copies of many reports have been sourced from Skinner’s own archives or those of the various police departments who assisted Mulder and Scully; those with more personal elements have often been sourced directly from Mulder and Scully, who kept their own copies at home for private reflection.

The archive is obviously missing a whole lot of information, largely because this volume only covers cases related to “Cryptids, Biological Anomalies, and Parapsychic Phenomena.” That means that none of the show’s mythology episodes are included here, in fact, there are very few mentions of aliens whatsoever which is actually quite surprising for a book about the X-Files given the show’s reputation! It’s also worth noting that certain episodes are unlikely to be included because this is supposed to be an official FBI archive and they were never official Bureau-sanctioned investigations. But what is included here is both the second X-Files movie and several episodes from the recent revival seasons, keeping the book surprisingly up-to-date.

The X-Files Official Archives is a must-buy for fans but unlikely to appeal to anyone with only a passing interest in the show.

“The Curse of the Brimstone Contract:” A Steampunk Adventure, Part 6

‘Name the Emoticon’: An Ideal Card Game for Virtual Get-Togethers