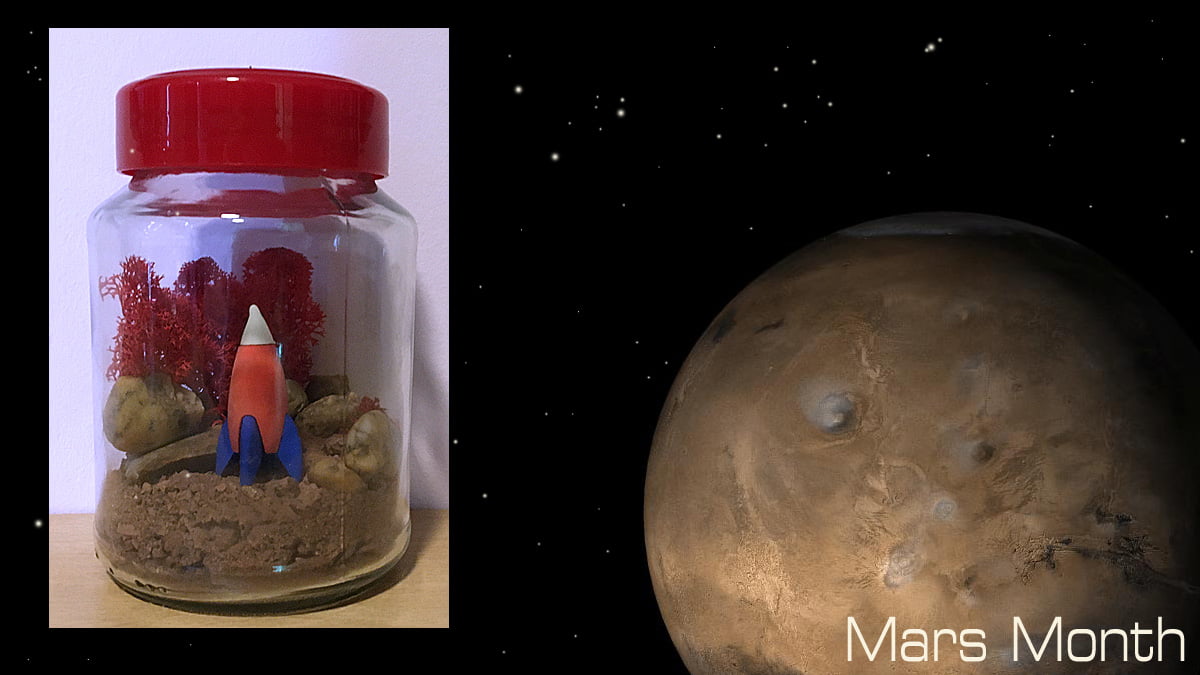 Throughout July, GeekMom is preparing for the planned launch of the Perseverance rover on July 20th with Mars Month, a month filled with Mars-themed content. Be sure to follow the Mars Month tag to find all of this month’s content so far in one place. Today I will be showing you how to create your own Mars Jars, inspired by Carl Sagan.

While reading The Sirens of Mars by Sarah Stewart Johnson, I came across multiple references to a series of scientific experiments carried out by Carl Sagan which had been dubbed Mars Jars. These Mars Jars were, to quote a short biography of Sagan by Gabrielle Borisovna, “tiny self-contained microenvironments designed to mimic the Martian atmosphere”.

While I didn’t have the resources to create my own Mars Jars in the same way Sagan himself did, the phrase stuck with me and I was inspired to create my own version. These Martian terrariums (martariums?) use easy to find items and allow you to create your own mini Mars scenes at home.

In order to make your own Mars Jars, you will need:

I used an old coffee jar to build my first Mars Jar but old jam jars, or even bottles could work provided they have a wide enough base and a neck that will allow you to place larger items inside the jar. A jar with a lid is a good idea to prevent your scene from gathering dust while out on display.

For my red dirt and rocks, I detoured one of our family’s lockdown walks to a nearby field with a public footpath running right through the middle of it. Here I was able to find plenty of small red rocks to bring home and a few pieces of an old, broken red clay pipe than had been smashed into chunks by a plow passing over it. Depending on where you live, you may find it easy to find red rocks and clay out and about in your local area while on a nature walk but if not, you can always pick up some red, fish tank gravel to serve as an alternative and use craft paint to paint some ordinary stones from your neighborhood red.

I began crafting my Mars Jar by smashing up the red pipe fragment into a coarse powder using a hammer – a task my ten-year-old tackled with gusto! Once it had been pummeled into a vaguely dirt-like texture, I added it to my cleaned out coffee jar and tapped it down until it compacted to form some reasonably solid ground.

Next, I added my rocks. How you choose to add these is entirely up to you but I tried to place a variety of smooth and sharper-edged stones into small piles to simulate the images of the Martian landscape I had seen in photos taken by the various Mars rovers over the years. It took a bit of trial and error to find an arrangement I was happy with, but eventually, I got there.

If you want your Mars Jar to look totally realistic, you can stop here, but I wanted something with more of a science-fiction feel so I chose to add a few more items to my jar. First was the only item I spent money on for this project – a few small cuttings of bright red dried Reindeer Moss. I picked mine up on eBay for around $3 (including shipping) for 25 grams which would be enough to make dozens of Mars Jars should you want to do this as a project with a larger number of people. The moss has an odd, almost sponge-like texture which reminded me strongly of the red weed from H.G. Wells’ The War of the Worlds and it added not only a more bold color to my landscape but also an otherworldly feel. Should you want to add more color to your Mars Jar, the moss can be purchased in a rainbow of bold, bright shades including blue, purple, green, and hot pink!

My Mars Jar was now almost finished but I felt it needed something else. Raiding my son’s room I found a small, rocket-shaped eraser leftover from when he collected those small Japanese pull-apart erasers – I believe this particular one had come from the gift shop of the National Space Centre. He was happy for me to use it and this last item really brought my Martian landscape to life. Multipacks of similar items can be found on Amazon or keep an eye open in museum gift shops or stationery stores when you can. Other ideas for items to include could be small toys (a Marvin the Martian figure or Lego alien minifig would be amazing), vehicles made from small building blocks, a drawing of an alien, or even a real air plant.

Once you’ve placed all your items inside to your liking, your Mars Jar is complete! Put it somewhere on display where it’s unlikely to be knocked over as your items are not secured down in any way. Now it’s finished, why not write a short story about the scene inside it? Who is inside the rocket that landed and what have they come to study? What is the name of the alien creature standing there? How does your vehicle move about on the surface? Mars is a place where your imagination can run wild and you can let your very own Mars Jar help inspire you.

Crafting the Detective: My History of ‘Sherlock’ Projects

2 thoughts on “Mars Month: Make Your Own Carl Sagan-Inspired Mars Jars for Under $5”