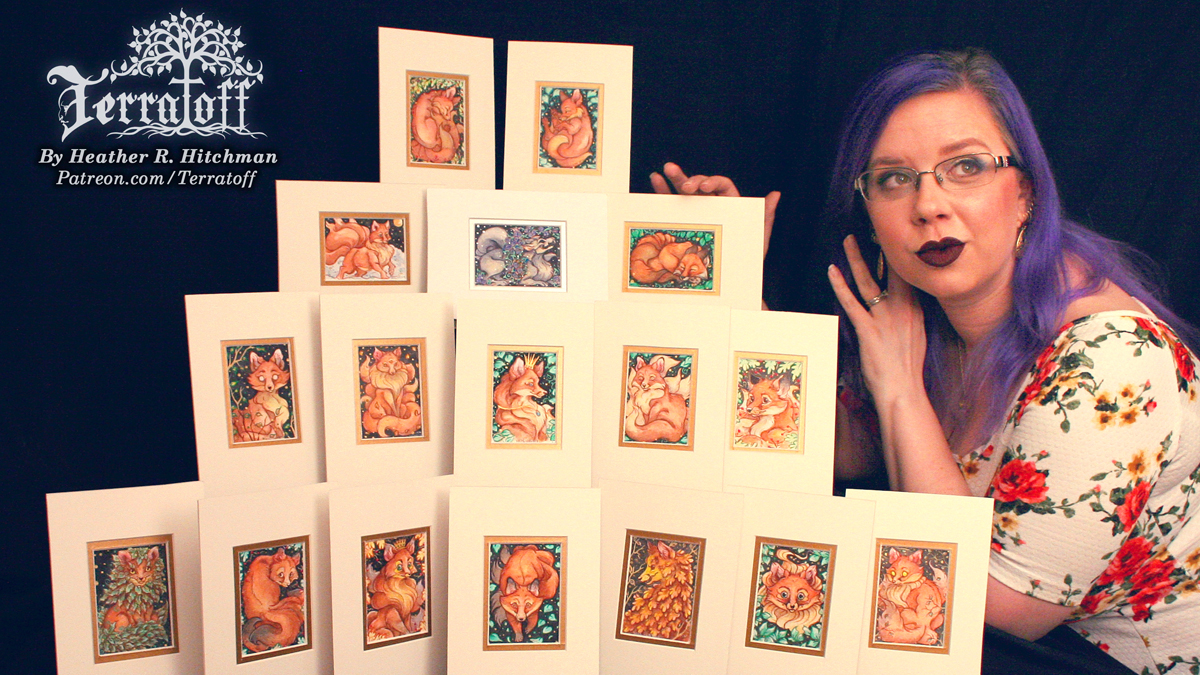 “Terratoff is a world where magic is the essence of all life and fantasy creatures reign. Born of a magical tree, the fauns rule over this mythical realm filled with creatures of magic such as unicorns, dragons, and many more. But when the supernatural plague known as ‘The Rott’ returns it sends the fauns into a holy war. As the Rott epidemic spreads, their world suddenly becomes entangled with ‘The world of Man’, causing supernatural phenomena to tear both worlds apart.”

This is the description on the Patreon run by Heather Hitchman, the artist and creator of Terratoff. It sounds like the blurb of a book that I would buy and stay up all night reading. Everything about it speaks to the fantasy lover in me. Unicorns, dragons, magic, and a world in peril. The same can be said of the art. This is why when I passed Heather’s booth at MegaCon 2018, I knew I simply had to include her in this series.

Heather has been working on Terratoff for many years but she’s been drawing and telling stories since she was a child.

Before I had even learned how to write, I crafted crudely illustrated books as a child and told the stories of the characters out loud to my family around the dinner table. At the time, I had no idea that my life would eventually come full circle back to those early years, but in true ‘storytelling’ fashion it did and I am so glad.

Pursuing a career in art requires an enormous amount of passion, even in the best of economic times. Heather started her journey by taking small personal commissions online as she worked to break in to animation and television. Unfortunately, graduating into the climate of The Great Recession forced Heather to take on work that wasn’t leading to the work that she felt she needed to be creating.

At first, working in the animation / television industry seemed like a path that would fulfill all of my creative dreams. I wanted to draw storyboards, write scripts, lead production, and create the fantastic worlds you see on the big screen… but the reality for me was being severely over worked and underpaid while working under a corporate mindset that stifled creativity. I felt totally lost and exhausted, yet I kept working on Terratoff in tiny pockets of free time hoping that my time would come.

As many artists do, Heather realized the only way her dream of Terratoff would be realized was if she took action. So that is what she did.

I walked away from the industry and devoted all of my time to creating my own work while freelancing to pay the bills. Slowly but surely the fairytale art and stories of Terratoff are growing into their own self sustaining brand and intellectual property.

She found support through an online artists group known as One Fantastic Week. She credits this online community of artists with helping her develop the skills she needed to cultivate her own brand. With those skills she has been able to nurture Terratoff from a “someday” dream into a day-to-day reality.

Those interviews, and the one on one guidance from the other members of the group, provided the tools I needed to begin my journey to becoming  an independent artist.

There is so much magic and whimsy in Heather’s art, it feels much like you’ve stepped in to a childhood wonderland. Even Heather’s current favorite piece of work is tied to childhood, specifically hers. “Immune” is an image of a unicorn in a graveyard that was inspired by Heather’s own experience visiting a children’s graveyard.

It was so heartbreaking and solemn, yet I was too young to understand just how tragic a place this really was. Despite the grief this place represented, it was beautifully decorated and tended to, filled with an aching love. I was terrified of death as a child, and somehow being in this graveyard made the thought less frightening  and it’s a memory that’s always lingered in my mind. The piece and the lore I wrote around it represent my childhood coping of death and grieving. 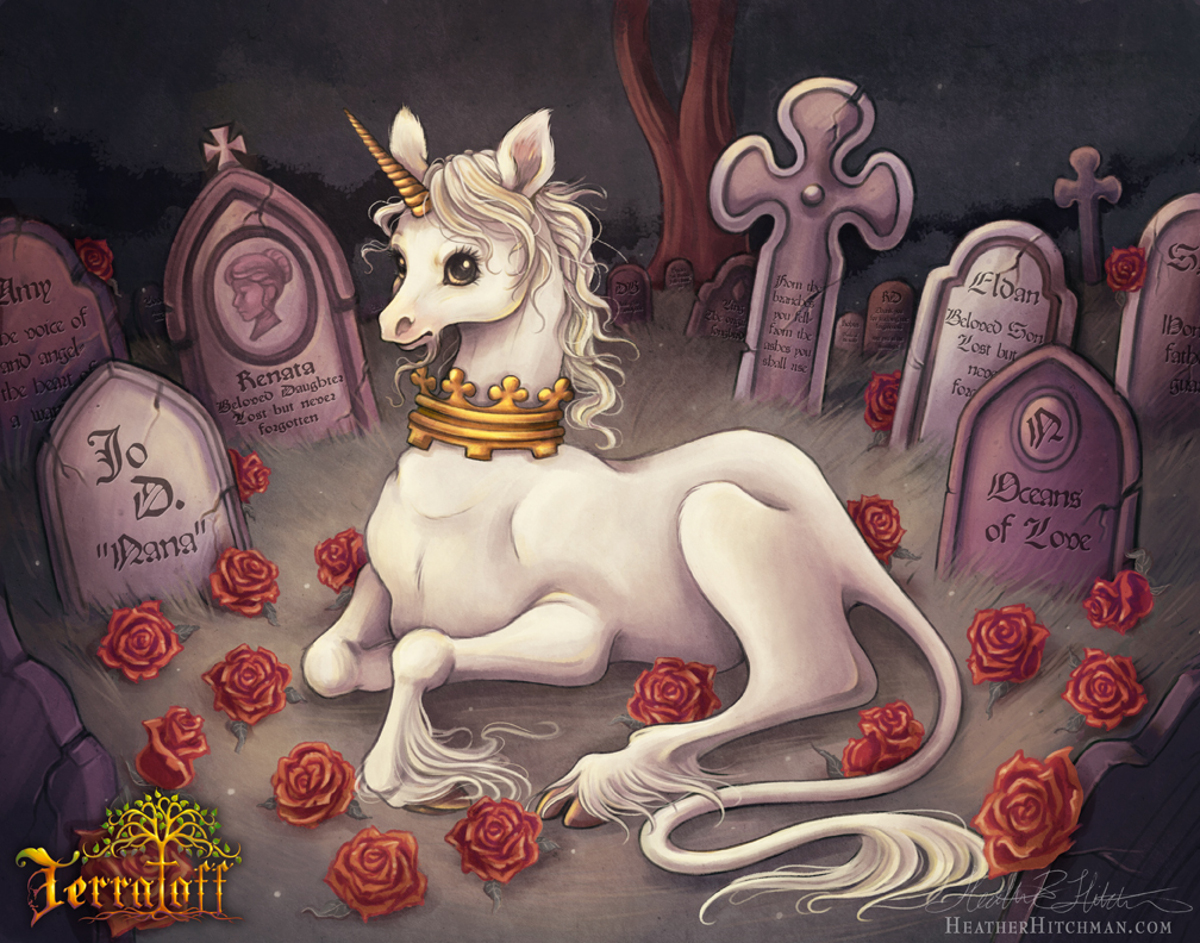 I wanted to know more about Terratoff… particularly the story behind it. Heather began conceptualizing this incredible world when in middle school. The world has grow as she has and it is so impressive in it’s size and scope.

The feeling of Terratoff is a combination of two childhood memories, the eerie excitement of Halloween and the magic of an early Christmas morning. The world is filled with a beautiful warm wonder and yet there is a haunting presence of something mischievous in the air.

The trees have long twisting branches dressed in richly colored autumn leaves all year round. There is a slight smell of friendly smoke in the air, perhaps from a creature cooking something delicious in their homestead, or a dragon’s flame overhead as it fights to protect its territory. Cheerful flowers and dancing vines cover everything in sight, be it an ancient stone stronghold deep in the woods that time has long forgot, or the many wooden houses and stalls that line the dirt roads of the neighboring towns. Orbs of light containing benign magic dance across the air, emerging in greater numbers during the night or when powerful magic is being conjured.

Beyond the land of The Winnow, where un-tainted magical creatures roam, there exists a darker territory known as The Dark Lands where the corrupted creatures known as The Rott dwell. This land is bitter, with a biting chill in the air and darkness all around. Only the bravest or most foolhardy dare enter…

I’ve read fantasy novels with less novels that are less detailed development. Usually, an artist creates art inspired by a concept or something specific, similar to the work done by Justin Peterson or Stanley Morrison. Heather’s work, though, is built around a world of her own. Terratoff comes to life through Heather’s artwork much the much the way Doug Hoppes work gives life his world.

There’s a deeper story to Terratoff than just a world of unicorns, dragons and fauns. Heather has already written a collection of short stories set in this rich fantasy world and once the overarching story is complete, we can expect to see a series of graphic novels. I am sincerely looking forward to seeing them.

The tale is about a young human girl named Thalessa on a quest to find where she belongs. She lives in the world of Twom (The World of Man) but is haunted by two magical creatures that visit her from Terratoff. The first is a ghostly cat that glares at her in the night, the second is a charming and striking faun named Blue Hair. Both beckon her to follow them to Terratoff, but who she chooses to follow could change her world and Terratoff forever…

Conventions, Faires, and Oh My!

When I met heather at the convention she was bright-eyed and full of smiling energy. What struck me was that she embodied the same beautiful energy that you can see in her art. From her gorgeous vividly colored hair, to her quick and full smile, down to her tone of voice and enthusiasm – you can fell the spirit of her art just talking with her. When I asked her what she liked best about conventions, it explained so much:

My favorite part of doing the conventions is interacting with the people and getting to “perform” my stories for them! Just like when I was a kid entertaining my family at the dinner table, I hold up my art and tell their stories while my audience enjoys the show! I like to bring the same energy to my booth that you might find at a Renaissance Faire, a sense of magic and theatrics combined with charming characters that transport the viewer somewhere else…even if it’s just for a moment. That is why I include a copy of the stories on a scroll with every print and original, so that the collectors can revisit that moment they met their first “Terratoffian” again and again.

Meaning that customers aren’t just getting a piece of art, they are getting a slice of her world. They are receiving passage to a unique universe with a new friend, whose story that can be read and re-read.

As with Jesica from Silver Root Studios, the mention of Renaissance Faires piqued my interest. Having known my share of Ren Faire people, I just can’t not ask. I love Ren Faires so it was great to find out Heather loves them too.

You mentioned Renaissance Faires – have you taken your work to any? I assume you’ve attended a few even if just as a guest – What do you like best about them?

I LOVE RENAISSANCE FAIRES! My favorite is the Pennsylvania Renaissance Faire in Mount Hope. Perhaps I adore it so much because it was my local faire growing up. Even so, the enthusiasm of the performers, the immersive environment, and the many shows and crafters there just fill my heart with magic every time I visit. The grounds are filled with lush greenery, the streets are surrounded with themed buildings, carts, and theaters that really set the mood. I think my favorite part is the feeling of being transported to another place and time…where I can be somebody else and truly forget my modern day woes! 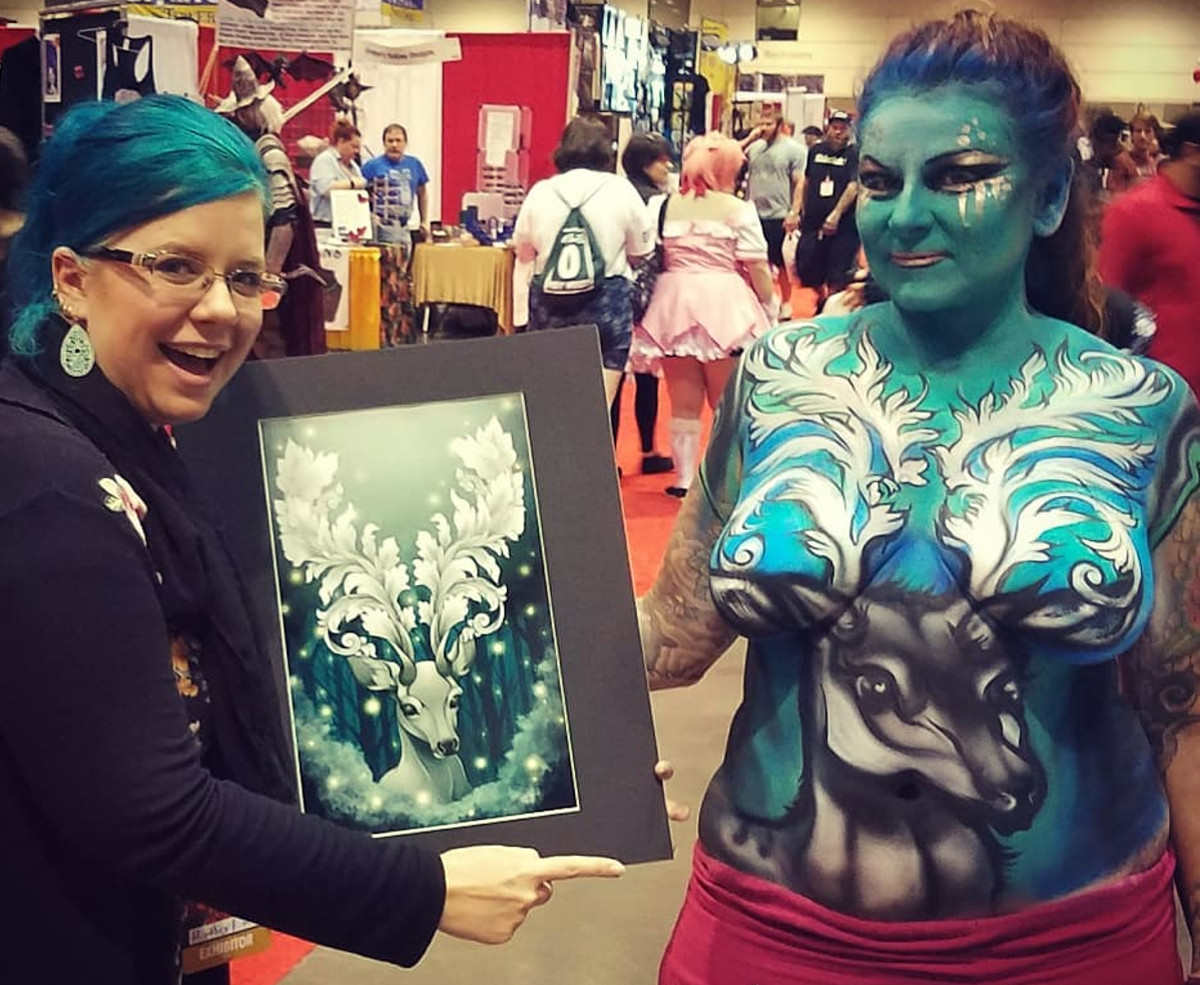 I skipped asking for any Ren stories but I naturally asked about her favorite convention experience. Ironically, it happened at the very place we met. It was one of those one in a million stories and I am so glad Heather shared it:

At this last Megacon Orlando [2018] a body paint model fell in love with one of my ‘Filigree Stag’ prints. The digital painting depicts a princely grey stag in a teal forest, upon his head grows a mighty pair of glowing white antlers fashioned in a filigree pattern. She asked if she could have the portrait painted on her body and I very enthusiastically agreed! She returned later to show me the amazing paintwork done on her torso and it was so incredible! It was so amazing and humbling to see somebody fall in love with my work enough to have it painted on their body.

If you’ve been on Twitter in last month you might have seen the hashtags for #Junicorn, or #Smaugust. My introduction to these was through Heather’s art. Apparently, they are not unique to her but are products of the Twitter art community and also include things like #Mermay, #JuneFae, #JourneyJune, #Inktober, and #Drawcember. Heather did introduce a new one this year called #MarchOfTheFauns. I’d encourage you to check out these hashtags in their respective season for a wide sampling of art.

In the meantime you can find Heather on social media via Twitter, Instagram, or her Twitch Stream.

If you’d like to support the building of Terratoff and in the process score some really gorgeous art, I’d recommend you check out Heather’s Patreon.

If you’d like to catch up with Heather – an experience I truly recommend – then take a peek at her convention schedule coming up.

I’d also recommend signing up for her newsletter so you can keep up to date on future appearances and know right away if she adds any new events. In the meantime, you can find me ogling dragons over at #Smaugust. See you there! 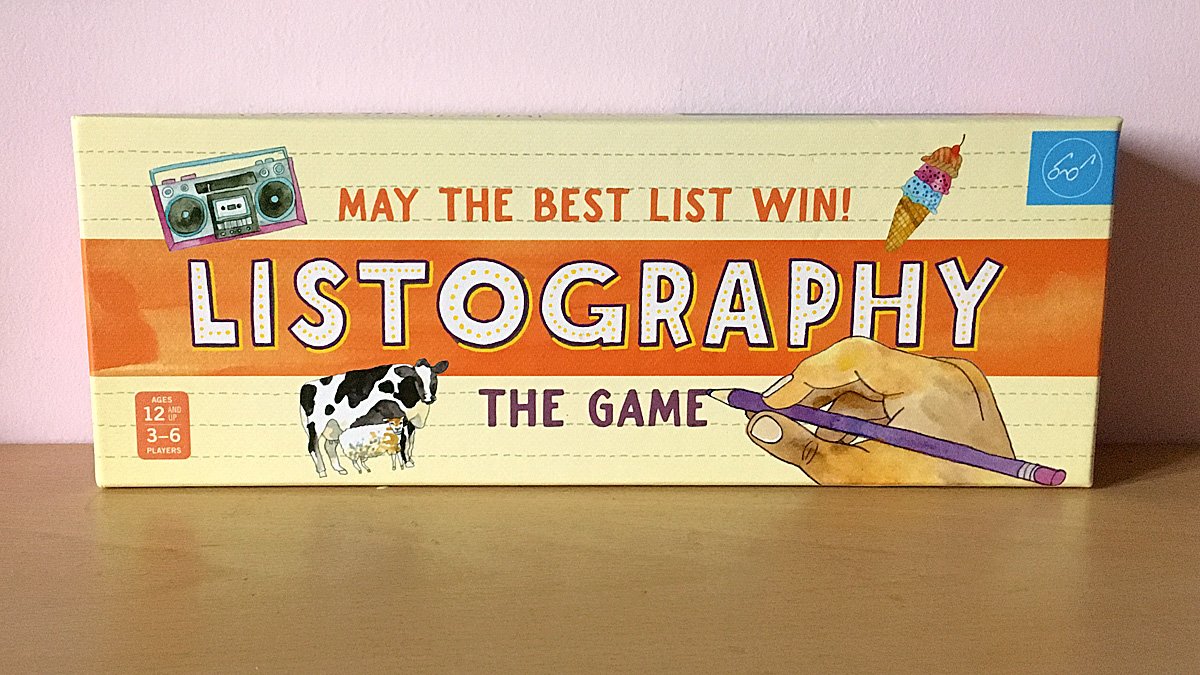 Family Games for the Holidays: ‘Listography’