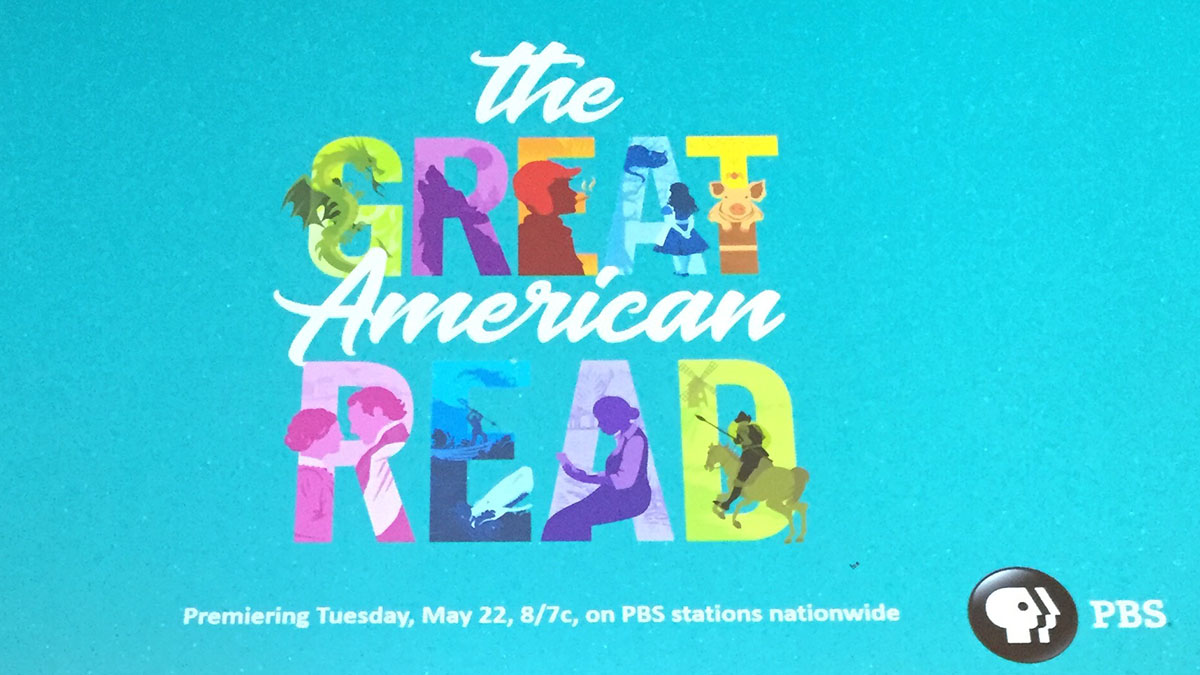 The upcoming PBS series The Great American Read kicked off last Friday with the reveal of the one hundred titles in contention for “America’s Favorite Novel.”

The top one hundred were chosen through an in-depth survey taken by approximately 7000 Americans with accounting for age, gender, race, and region. Authors are only represented once and series are counted as one title. The list of books spans five hundred years and represents a variety of genres and interests.

For the reveal, PBS invited an audience of self-proclaimed book nerds to the Morgan Library and Museum in New York City. The Morgan Library, with its walls of old rare books and stunning wall and ceiling paintings, is the perfect venue for celebrating novels. I encourage everyone to visit the museum, and certainly attend if you are ever invited to a party! There is something magical about enjoying a parfait in a library with actual working hidden staircases.

The one hundred titles were revealed by a handful of celebrities, all also self-proclaimed book nerds, who are involved in the project. Meredith Vieira, host for the television series, acted as emcee, introducing the project and the event and reading the first and last ten titles (the full list is below). She was joined by actresses Diane Lane and Ming-Na Wen, former footballer and author Chris Kluwe, author Armistead Maupin, as well as representatives of the Library of Congress, sponsor Nutopia, PBS, and publishing.

Audience reaction was welcome, encouraged, and indeed, part of the fun. As the speakers read out titles, alphabetically in groups of ten, the audience clapped and shouted for their favorites and gasped and laughed for ones they may not have chosen themselves. E.L. James’ Fifty Shades of Grey garnered the most giggles and raised eyebrows — though to be fair, Kluwe coaxed an extended reaction — and a quick look at Twitter shows that sentiment held across the virtual audience, too (I haven’t read it myself so I can’t comment on its quality, only its notoriety). But most of the titles were greeted with joy.

The reveal was followed by an excerpt from the first two hours of the series, premiering on PBS May 22, that highlighted the special guests, as well as some of the most beloved titles.

I teared up as Wen described The Joy Luck Club as a universal story about immigrants and family, and again when Eliyannah Amirah Yisrael, the creator of web series Hermione Granger and the Quarter-Life Crisis, explained how much Hermione and the Harry Potter series meant to her.

I’ve read only 39 of the 100 titles, so I have some reading to do if I want to provide an informed opinion of The Great American Read!

But of those I have read, I would certainly cast a vote for Alice, Anne, Harry, The Alchemist, Austen, Brontë, and The Joy Luck Club at least. Luckily, we are allowed to vote once every day during the polling period so I can spread my “favorite” around. And I am inspired to head to the library for the ones I haven’t read. Producer Jane Root said her favorite part of The Great Read in Britain, held in 2003 and resulting in a fight between The Lord of the Rings and Pride and Prejudice (Tolkien won the crown in the end), was seeing everyone out reading the books. We all hope that same fever takes over our own communities.

Voting will begin after the premiere May 22 and continue through the summer.

The Cliffs of Insanity: Why I’m in Love With Kickstarter